I put lots of pictures on my race report from that 77 mile run at Javelina Jundred almost two weeks ago. But there are a lot more pictures I haven't posted yet that I thought I'd share with you. My soul belongs in the desert so at a race like this, I feel right at home. 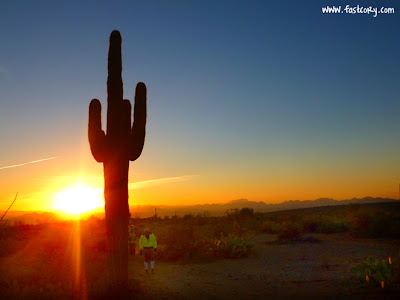 As I was standing at the starting line I had a realization: I Should Have Brought A Unicycle! I think I could have gotten away with it.

This shot is a mere 30 minutes into the race (before the blisters, nausea, and hallucinations where people start having conversations with Smurfs.) 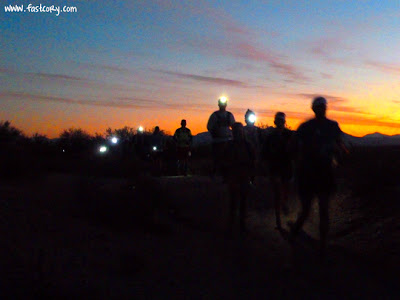 The first little bit of the run is in the dark. One of my favorite parts of the race is seeing the sun come up to shed light across the desert.

To get an idea of how enormous some of the saguaro cacti are check out this runner near a cactus:

Many miles of trails at Javelina Jundred mostly non-technical. But there are definitely stretches that are more technical and tricky. I think it's a good mix.

Although there were lots of runners out on the trail, there were often long stretches (especially at night) where these were my only companions:

I smiled when I came to the part of the course where I saw this wilted, worn tree because I remembered it so vividly from last year's race. (You can see a picture of the same tree in last year's race report surrounded by some cool clouds.) There were certainly times when I felt like this tree.

After being engulfed by the scorching sun all day, it's hard to describe how happy I was at this point when the sun started to go down:

I mentioned that Mel came out to pace me starting at mile 62, and then sometime an hour or two later her nose sprung a leak. We had to laugh about it. A bloody nose seemed perfectly appropriate considering the other mishaps that had happened throughout the day. 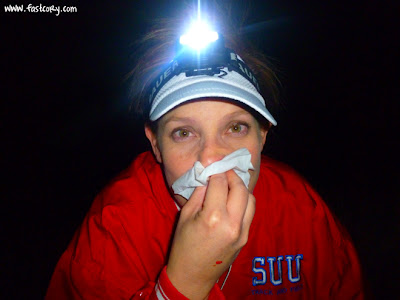 Around mile 74 we reached the aid station called Rattlesnake Ranch. I knew it would be my last aid station of the race because I had already missed the cutoff. Grrrr. Then I saw this license plate on one of the cars at the aid station. It made me smile.

Mile 76 arrived. The last mile of my race. I had been on the trail 24 hours, and it felt like I was sleep walking as I watched the sun come up for the second time during the race. 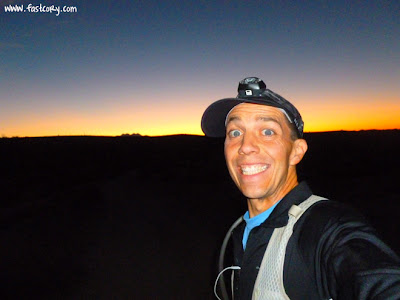 The ending wasn't what I had planned, I didn't reach my goal of 100 miles. But I remembered this quote from Gordon B. Hinckley which perfectly summed up how I felt:
“Anyone who imagines that bliss is normal is going to waste a lot of time running around shouting that he’s been robbed. The fact is that most putts don’t drop, most beef is tough, most children grow up to just be people, most successful marriages require a high degree of mutual toleration, most jobs are more often dull than otherwise. Life is like an old time rail journey…delays…sidetracks, smoke, dust, cinders and jolts, interspersed only occasionally by beautiful vistas and thrilling burst of speed. The trick is to thank the Lord for letting you have the ride.”

I was thankful for the ride.
Posted by Cory Reese at 7:53 AM