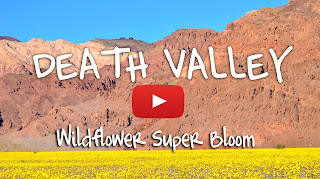 Death Valley is alive with a rare super bloom of wildflowers! The landscape is bursting with a spectacular kaleidoscope of yellows, whites, purples, and pinks. 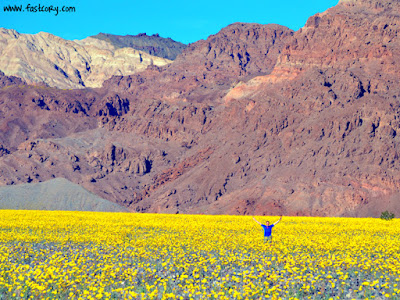 I got into Badwater coming up in July. Known as "the world's toughest foot race", runners travel 135 miles through a landscape that boasts the hottest temperature ever recorded. (If you looked up "Scared to death" in the dictionary, you would see a picture of my terrified face.)

I just returned from my first trip to Death Valley to scout out the Badwater course and check out this amazing bloom of wildflowers. Here is a video from the trip showing just how incredible the wildflowers are:

If This Trail Were A Food, It Would Be A Cinnamon Roll 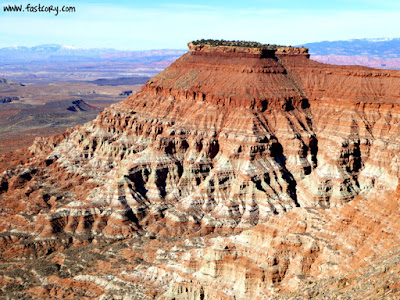 A little while back, I took the South Rim Trail to The Point, easily one of the most beautiful stretches of trail I've ever been on. 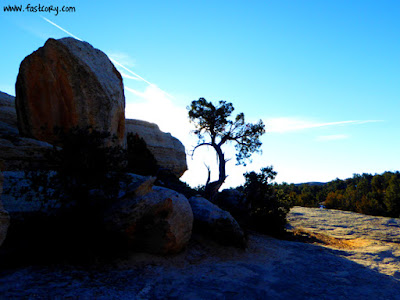 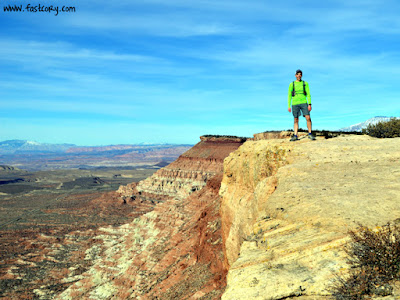 The weather here in southern Utah has been pristine lately - not too hot, and not too cold. (That usually only lasts about four days and then suddenly our lovely little community turns into the surface of the sun.) The morning I went, it was still cold enough to freeze some of the pockets of water that had formed in the rocks. 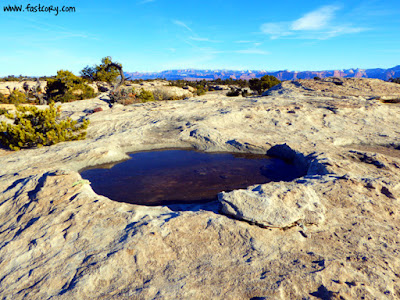 This trail is part of the Zion 100. (You can see last year's race report HERE.) It is difficult, twisting, and turning slick rock that puts your legs through a cheese grater. But the views are worth the shredded legs. 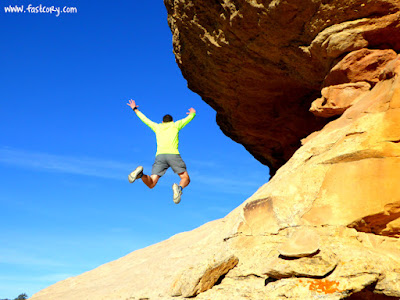 It seemed appropriate to do a jumping picture over a crack in the Earth that was 5 feet deep, but looked 500 feet deep: 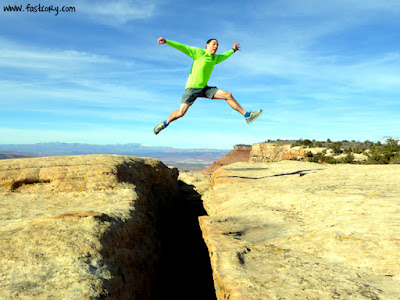 I found a decent heart rock on the trail. This is how I feel about Gooseberry: 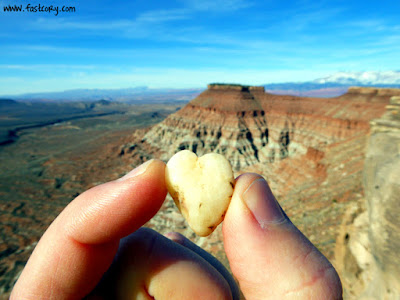 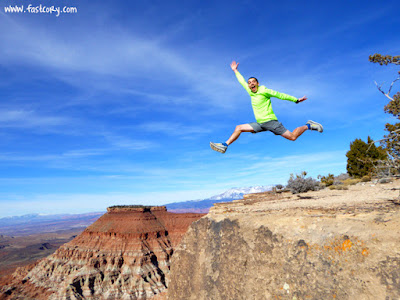 I reached The Point which leaves you standing at a cliff on the edge of the world. All of southern Utah opens up in front of you and the views are breathtaking. During the Zion 100 last year, I split my shorts opened in this location. During this run I managed to avoid that wardrobe malfunction. 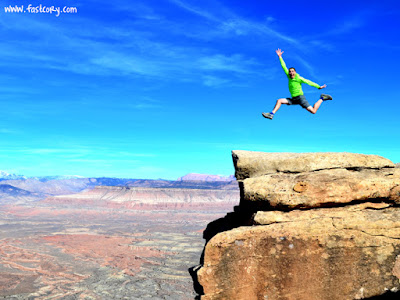 The route back to my car involved more cliff-side trails with Zion National Park in the distance: 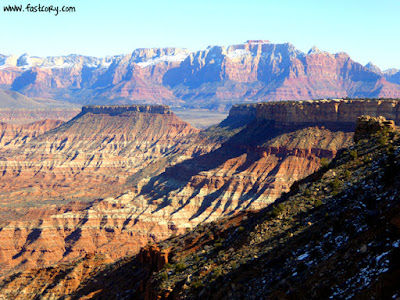 When I made it back to the trailhead, I found myself holding a collection of cool rocks I had picked up along the way. I decided to stack them up and leave them for the next person to pass by who happened to be a fellow rock lover. 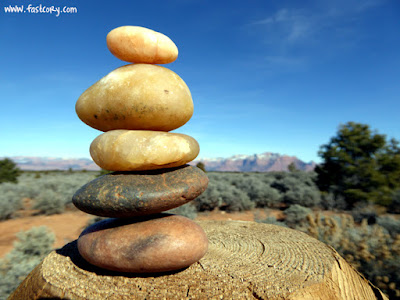 A few days later I hit the trails in Confluence Park in Hurricane, Utah. I have been using the new Tailwind flavors on my runs. The new ones are Tropical Buzz and Green Tea Buzz. (Both are caffeinated.) They taste awesome! I love Tailwind and the people behind it. If you want to try the new flavors, they are now available at www.tailwindnutrition.com. 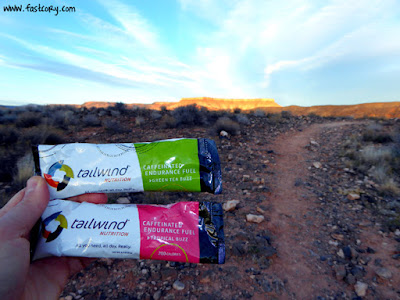 I took Little Debbie out with me. When I take her out on the trails, she is like a kid in a candy shop. (Or like me in a cinnamon roll shop.) 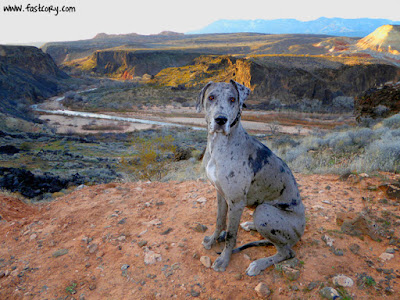 I GOT INTO BADWATER!!! 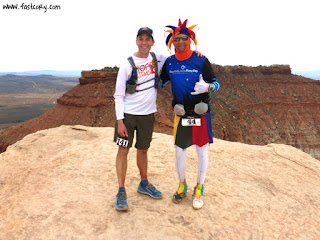 On Tuesday I found out that I got into Badwater!!! Touted as "World's Toughest Footrace" - 135 miles through Death Valley in July. They only let 100 runners in this year, and they said it was the most competitive field of applicants ever. Wow! 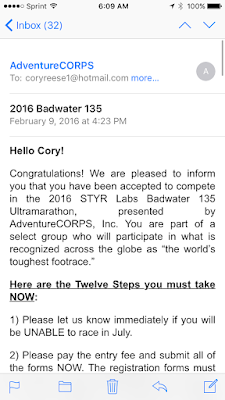 Since finding out, quite a few people have had a puzzled look on their face as they asked "Why are you so excited to run 135 through Death Valley?" Their questioning look and tone would be the same if I told then that I was so excited because I was approved to get teburculosis, get a million paper cuts on my eyeballs, eat a whole can of Cream Of Mushroom soup (which is utterly disgusting), all while listening to Kenny G's Greatest Hits album.

The actual task of running 135 in Death Valley in July terrifies me, but I am so excited for the adventure that is in store. The next five months will include a good chunk of training miles (all run with layers of clothing), and time inside a sauna, all with the purpose of training my body for the heat....so that when race day comes, I will (HOPEFULLY) be ready to take on the demands of the race. I also need to dust off my road shoes. After spending years almost exclusively on trails, I have seriously forgotten how to run on roads! 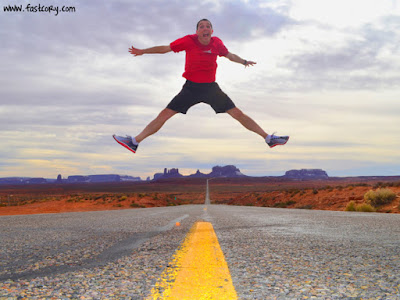 I was touched to get a phone call Tuesday night from my amazing friend Ed "The Jester" Ettinghausen, congratulating me for getting into the race. In basketball terms, getting a call from Ed is like getting a call from Michael Jordan. I admire and respect this man so much.

One of the questions on the Badwater application was "Which Badwater veteran do you admire most, and why?" My answer was easy. Here's what I wrote:

"The Badwater veteran I admire the most is Ed “The Jester” Ettinghausen. I have had the honor of running many miles at many races with Ed over the past few years. I first met him at the Javelina Jundred years ago. I thought “Who is this crazy runner who is actually carrying a cowbell so that he can cheer for other runners who pass by?” I am continually inspired by his kindness toward other runners. When I have run with him on the 1 mile loop at Across The Years, he says hello to each and every runner who he passes or who passes him. I have been with Ed at races during times when he is going through a rough patch and he is struggling. Yet even during these times, he maintains the same level of optimism and enthusiasm. At the most recent Across The Years in January he was competing neck and neck with another runner. But instead of being overly focused on competition, Ed was running with the other person. They were laughing and joking with each other. They were helping each other. Two men in competition for the win were helping each other! I was so impressed by this. Ed has the willingness to set goals that may seem unattainable to others…and then he puts in the work needed to achieve those goals. I admire Ed not only for his running accomplishments, but also for who his is as a person."

What is awesome is that Ed will be running Badwater again this year. He said "Let's made a deal, Cory. Whoever gets to the finish line first will wait for the other to cross so we'll be able to congratulate each other at the end." That's a deal! 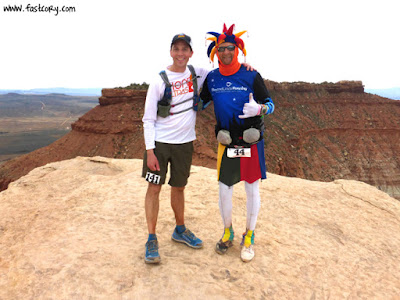 I can't wait for this once in a lifetime adventure. I'm going to work hard between now and July so that I'm up for the task.
Posted by Cory Reese at 8:03 AM 10 comments:

I Applied For Badwater....And It Was Terrifying

A list of things that scare me to death:


The Badwater 135 mile race through Death Valley in July has been on my mind for a few years. National Geographic Adventure ranks it "World's Toughest Foot Race".

But in all seriousness, this race does scare the Twinkie filling out of me.....which is why I've been so intrigued.

This year I worked up the courage to apply for this epic adventure. (Clicking that "Register" button was TERRIFYING!) I put in my application last week. Only 100 runners are selected after a committee reviews all the applicants. It's basically like submitting a job application about what you've done to prepare you for this race.

But athletic history isn't the only consideration. They also ask about your character. For example, one question was "What percentage of your athletic peers would say that you are a good human being?"(Check out THIS article from Runner's World about the Badwater application questions.)

I've been setting money aside for months in hopes of being one of the selected runners. I'll find out in exactly one week, on February 9th if I am chosen. 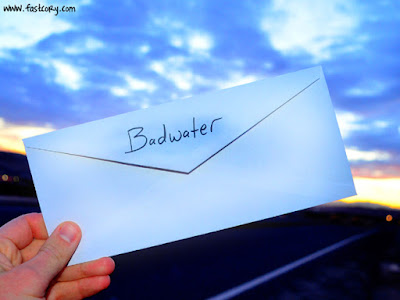 I think a Badwater jumping picture would be pretty sweet. Until then, I took this jump shot on Gooseberry Mesa a few days ago: 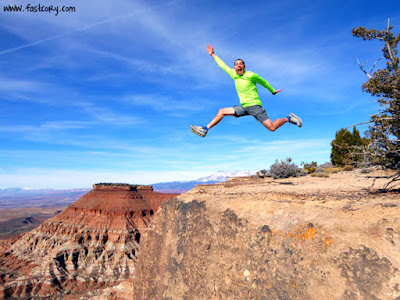 February 9th can't get here soon enough. I can't wait to hear what my future will hold. My fingers are crossed that the future will include a 135 mile date with Death Valley.
Posted by Cory Reese at 5:56 PM 7 comments: