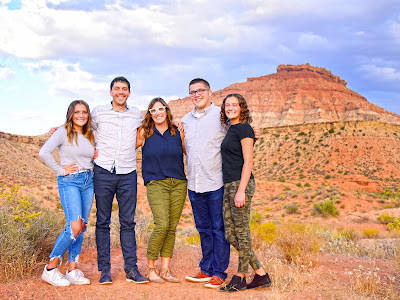 Happy Holidays and Merry Christmas from the Reese family! I’m sorry to report that we weren’t able to achieve our goal of teaching our dogs to bark the notes of The Twelve Days of Christmas. I had this vision of how awesome it would be for the UPS guy to ring the doorbell and have our poodle and Great Dane serenade them with a Christmas song. Maybe next year. Here’s a little rundown of 2019 at the Reese household:

Kylee is a sophomore at Hurricane High. I don’t know what kind of time warp I entered where suddenly our youngest child is in high school. Early in the year Ky and I contracted what was either the flu or the Bubonic Plague. We’ve never been so sick and I legitimately worried that the Grim Reaper might pop out of the pantry and snatch us. At least we got to suffer together. That wasn’t the only terrifying adventure me and Kylee shared this year. We also drove five hours to the middle of nowhere (also known as Tonopah, Nevada) to spend a night at the scariest motel on the planet, The Clown Motel. Sleeping in a place surrounded by clowns (and probably bed bugs) was pretty scary. In February she completed an amazing 50 miles at the Jackpot Ultra Running Festival. Ky continues to develop as an artist. Her drawing and painting skills are exceptional. A personal favorite art piece of mine was her rendition of Mona Lisa with the face of Homer Simpson. She went to prom and Sadie’s. She spent the summer working at the local pool, and is also on the high school swim team. Another highlight of her year was when we discovered an amazing pizza place in Hildale, Utah. The first time we took a bite of their pizza, we literally heard a choir of angels rejoicing. Strange to hear angels at the pizza place, but whatevs.

Dani is a junior at Hurricane High School. She is counting down the days until she is a senior and has the legal authority to shove kids into their lockers. She reached the rite of passage every kid dreams about – getting a driver’s license. This involved lots of early morning classes, passing a test, and getting lots of practice hours with a parent. Mel went out with her once, but she was so scared that she started levitating out of the seat. When she got home, she said “You’re going to have to be in charge of doing the hours with her.” Thankfully Dani feels much more comfortable behind the wheel now. Approximately 37% of Dani’s life is spent in the water. It was highly disturbing when I realized that she is starting to grow gills. She was a lifeguard at the pool over the summer. She is on the high school swim team. And she was on the water polo team. She is a very talented swimmer. She had a blast going to the BYU/Utah football game with her siblings, and also went to the homecoming and Sadie’s dances. Earlier in the year Dani and I drove to northern Utah to see one of our favorite musicians, Ben Rector. We were pretty psyched to meet him before the concert. He didn’t propose marriage to Dani like she was hoping, but whatevs.

Jackson’s year has been pretty insane in the membrane. During his senior year in high school, he also completed coursework to become certified as an Emergency Medical Technician. His classes went until 10pm, after already having a full day of school. He finished his final year as the pianist of the school Jazz Band and had the honor of being awarded Musician Of The Year. He was the Music Sterling Scholar for the school and earned a nice scholarship, then graduated from high school. Jackson chose to serve a mission for the Mormon Church and is currently in Medford, Oregon teaching in Spanish. Before leaving for his mission, he gave a farewell talk at church. The night before his talk, the whole family was in the car listening to our favorite reggae band Rebelution. While listening to the song “Celebrate” we heard the lyrics “I got your back at the worst set of times, and in return know that you have got mine.” I jokingly said “Jackson, those are cool lyrics! You should work those into your talk!” The next morning we were sitting in church listening to his talk. He said “I’ve had a few health problems over the past year. I received a lot of comfort from my dad when he sat me down and told me ‘I know this is tough, but just remember that I’ve got your back at the worst set of times, and in return know that you have got mine.’” #proudparentmoment The family inside joke had all of us smiling from ear to ear. After the talk, a few people came up and said “That was so touching what you said to Jackson.” People didn’t know where the line really came from, but whatevs.

Mel has managed to continue her 41 year streak of being pretty freaking awesome. In February she ran her first 100 mile race! We were able to run every step of the Jackpot Ultra Running Festival together and it was so cool to share that experience with her. We went to Costa Rica earlier in the year. It was pure heaven hanging around the beach, or lounging by the pool and trying to keep monkeys from stealing our snacks. Mel could have started her own HGTV home remodeling show this year by redoing all three bathrooms in our house. Her dad definitely would have been proud of all her handiwork. We went on an awesome road trip together in September. We spent time at Monument Valley, then headed to Ouray, Colorado where we saw the most stunning autumn colors ever. We hiked to the indescribably beautiful Ice Lake and Island Lake. Then we spent a day in Durango before heading home. We feel so lucky to have an amazing group of friends that we regularly get to spend time with. In fact, it was during one such weekend with a group of friends that we went down to Vegas and had a chance run in with Vanilla Ice. I’m relatively sure that seeing Mr. Vanilla Ice in person probably wasn’t one of Mel’s highlights for the year. Mel has some big news – she is starting a new job at Intermountain Healthcare! By the time you read this, she will have started. She will be one of their nurse practitioners who covers a skilled nursing facility in the area. She has been doing a similar job already so it should be a smooth transition. Her only flaw is an occasional chastising when I stop at the gas station to buy a soda, but whatevs.

I’m beginning my 15th year as a medical social worker for the University of Utah Dialysis Program. After more time than I would prefer with doctors, I found out I have this thing called Common Variable Immunodeficiency (CVID) which basically means that my immune system is as useful as a pet rock. I had to start weekly infusions of Hizentra (kind of like plasma) and will have to continue doing them for life. I love needles as much as I love Celine Dion music (somewhere around 0.000%), but usually the infusions go okay. My friend Scott Kummer helped me complete a lifelong dream of seeing a Cubs game at Wrigley Field. We sweated a few gallons of fluid during the game, ate crappy nachos, and had the time of our lives. I ran the Jackpot 100, Zion 100, and a race called Vol State. This little adventure involved running/walking/crawling/crying across five states and 314miles. Then I got home and entered therapy to deal with my PTSD. At the beginning of the year I set a goal to read/listen to 100 books. It’s the beginning of December and I’m at 116 books. This goal really has been life changing. But my ultimate highlight of the year happened on Halloween. At work I dressed up as Bob Ross, complete with the big afro and beard. I ran across the street to grab lunch at the grocery store. The guy managing the bakery said “Hey! Bob Ross! Did you know that we sell Bob Ross energy drinks?” He told me where they were. And suddenly…I was holding an energy drink with a big Bob Ross face on the front…while I was dressed as Bob Ross. I think I made all the planets in the solar system align in that moment, but whatevs.

Then we have our two dogs who create more than their share of mischief. Jack, the poodle, loves following us around the house like a stalker, and chewing on Bully Sticks. Since this letter is family friendly, I won’t describe what they are. Google it. (After I Googled it, I no longer allow Bully Sticks in the house.) He’s old and we don’t know how much longer he’ll be alive. Unfortunately he won’t be going to dog heaven. He barks so much that he will be going to dog hell. Then there’s our Great Dane, Little Debbie. She absolutely loves watching National Geographic videos. She is a horrible demon of destruction and sneaks as much food as possible. For example, this past week she enjoyed stealing a piece of pizza, a bag of homemade caramels, and a full plate of cookies that were left on the counter. Her general attitude is “I know I’m going to get in big trouble for this, but man, I love cookies, so whatevs.”

We had a lot of fun experiences as a family this year. We love going to concerts and saw Aerosmith, Rebelution, The Strumbellas, OneRepublic, and Paul McCartney. We enjoyed a fun family reunion at Sand Hollow Reservoir. We fell in love with Modern Family and had fun watching episodes and laughing together. We had lots of dance parties late into the night that included loud music and lots of mocking how terrible my dancing abilities are. A few times we’ve spontaneously made the 3 hour roundtrip drive to a dairy in Beaver, Utah that has amazing ice cream. The drive home usually includes a stomach ache, and mild self-hatred for the vast quantities of ice cream that were consumed, but whatevs.

I hope I’m not implying that our house is always a Norman Rockwell painting. We have had our share of challenges and heartache and frustrations and discouragement. We also have our share of fighting, arguing, whining, and complaining. But through it all, we still love each other. At least most of the time. We are a blanket of flaws and imperfections sewn together with love. I know. That last sentence sounds cheesy, but it’s true, so whatevs.

Thanks for your continued love and friendship. Here’s to a wonderful 2020! Love, the Reese Family