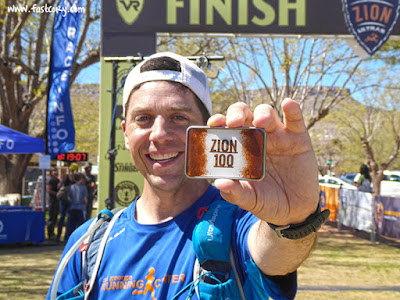 Hi. It's me, Cory. I just wanted to write you a little thank you note after this year's race. You're my friend, so I want to be honest with you. I wasn't sure I wanted to hang out with you this year. Because of these pesky infusions I've been doing every week, I haven't been able to run as much as I used to. I wasn't sure how my legs would hold up. But I love you. You are beautiful. And I love sleeping in my own bed the night before a race, with the start line only a few minutes away from home. 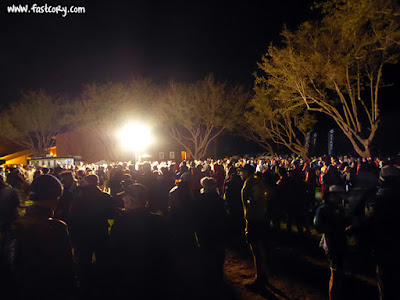 Mel has paced and crewed me many times over the years and she knows you are pretty cool, so she decided to run the 100k race the day before packet pickup.

I don't know if you know this, but once the race started, you made some people cry. It's kind of rude to make people do a 1,500 foot vertical climb right at the beginning of the race. If you look closely, you can see ant-like runners going up the mountain. 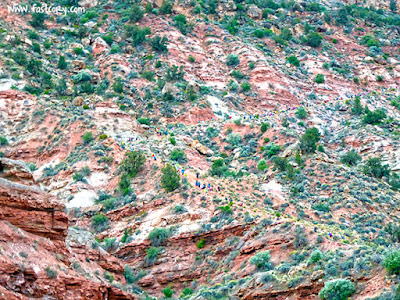 On that brutal climb up Goosebump you made my wife say quite a few four letter words. She decided you aren't as cool as she thought. 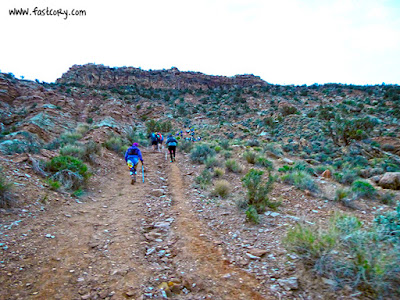 I'm not trying to be rude, but Mel wasn't the only one spraying out four letter words like water shooting out of a sprinkler. That climb is never ending. And it HURTS. 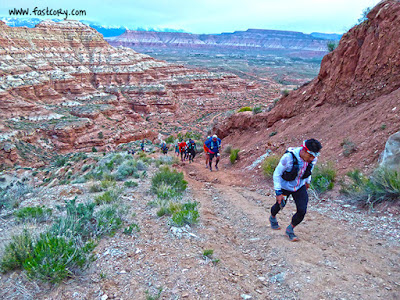 Mel was cursing both me and you. I said "Whoa! Hey! Don't bring me into this! You're the one who chose to come and hang out with the Zion 100." I didn't say or do anything to encourage her to start a relationship with you. I did tell her that the view at the top was worth the miserable climb. I think once we made it to the top of the mountain she agreed. 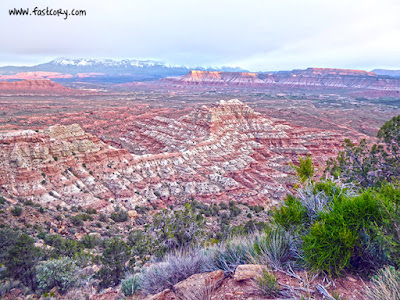 Then grand, sweeping views of Zion National Park opened up on the horizon. It made all the swearing go away. 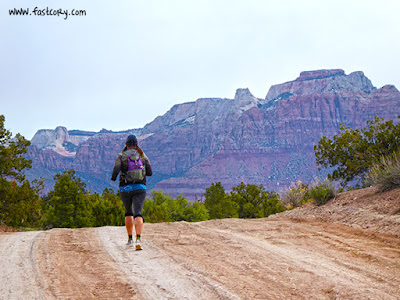 With every single mile that passed, I felt so incredibly thankful to be sharing those miles with Mel. Though she's been a runner for many years, she only recently developed an interest in ultrarunning. To be able to share such a horrible and wonderful and painful and rewarding adventure with her is pretty freaking sweet. 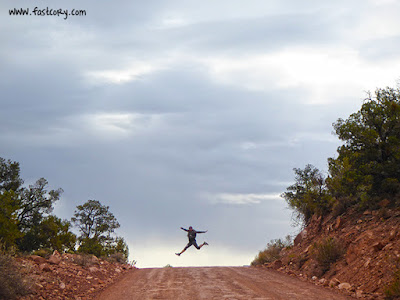 I really, really like how you added Wire Mesa to the course this year! I've never been on that trail before, but that trail made me love you even more. 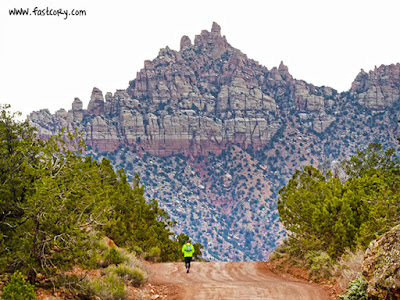 I had a difficult time running those miles on Wire Mesa because I had to keep stopping to take pictures. I've always told people that you are the most beautiful 100 miler I've run. Thanks for proving me right. 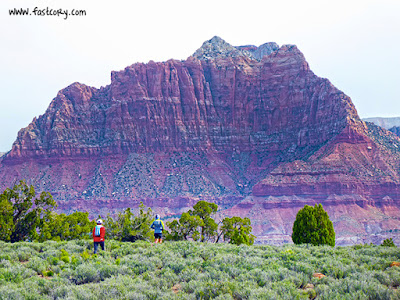 After about 20 miles running together, Mel and I split up. Those first 20 miles with her were my favorite part of the race. We gave each other a hug and kiss, then split up. 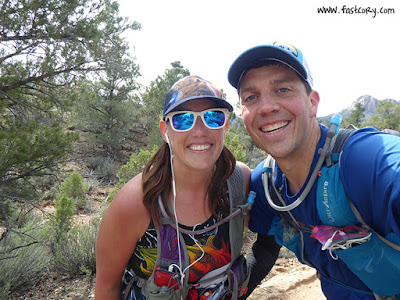 I then spent many, many hours mostly alone surrounded by your amazing scenery. I'd pass or be passed by an occasional runner, but most of the time I enjoyed the miles in solitude. 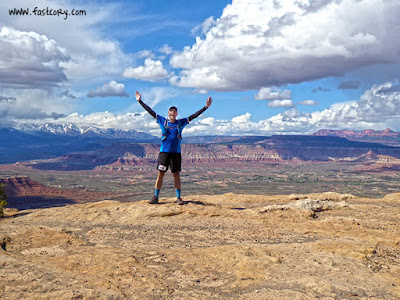 Of all the trails I've run in southern Utah, the view from The Point on Gooseberry Mesa is my very favorite place to be. I always feel a connection to home when I'm standing here because I can see Gooseberry Mesa from my driveway. 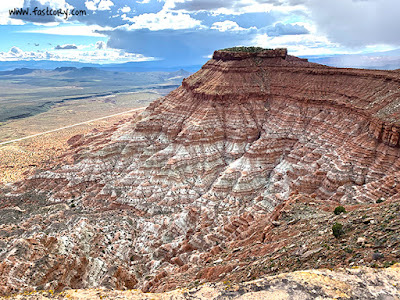 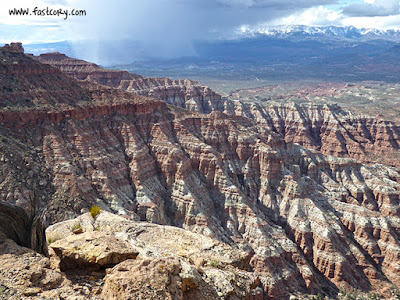 I can't thank you enough for the amazing weather you treated us to. You've thrown some downright horrific weather at us over the years. I swore I'd never talk to you again after the sweltering inferno of 2012. And you were a royal A hole last year with that ridiculous rain and mud. But you redeemed yourself this year. Thanks for that. 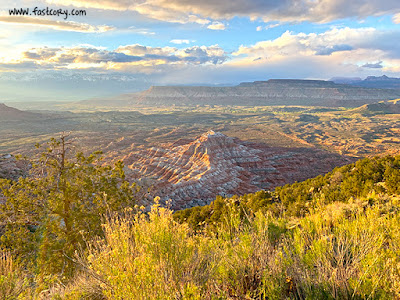 I was starting to sleep walk a little bit when I got to the Virgin Desert aid station around mile 53. I was thankful to see my friend Cherie Santiago who volunteered to meet Mel at that aid station and pace her to the finish line of the 100k. I gave her a big hug. Cherie is a bundle of light, energy, and kindness. 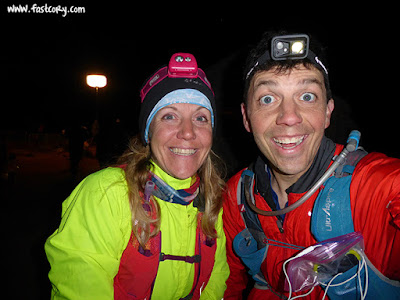 As I was talking with Cherie, I heard someone behind me say "Hey, I know that voice! Are you Cory Reese?" She introduced herself and told me her name was Cassidy Tinkoff. She said "I was listening to your book Into The Furnace during my flight over to this race!" We then left the aid station and enjoyed some fun miles together wandering through the dark desert talking and laughing. 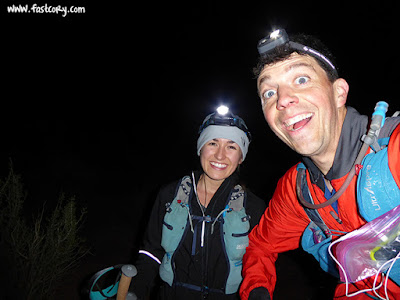 It was a LOOOOOOOOOONG night. It got super windy and the cold breeze pierced right through my clothes. And there was some sleep walking. And I nearly ran right into the back side of a cow who was standing right in the middle of the trail. (I was so surprised and scared that I let out a yelp that sounded exactly like a six year old girl screaming.) I was so thankful to make it through the night and see the sun lighting up the horizon.

I started to see runners coming down the road from Guacamole Mesa making their way to the finish line. It would take me many, many hours to make it up the road, run the Guacamole Trail, and then make it back down the road myself. They were many hours ahead of me and they looked horrible. 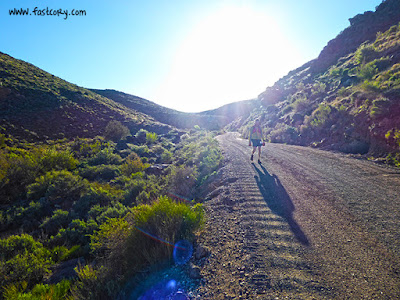 When I was at the mile 52 aid station, I made a poor life choice and ate a big piece of pizza. From that point on, my stomach threw a gigantic temper tantrum. It was twisting and turning in knots. I thought to myself "You have about 15 more miles to go. Other than your stomach, you're feeling okay. Maybe you should just throw up and let your stomach reset."

I've never thrown up during a race before. I've thrown up many times after a race, but never during. It seemed like a good time to end my vomit-free streak. I knew that throwing up couldn't make my stomach hurt any worse than it was already hurting. I grabbed my camera hoping to get a sweet mid-eruption photo. Then I gave my stomach permission to exercise the demons out of my body.

My stomach started spasming. Then dry heaving. More dry heaving. But no eruption! Alas, much to my surprise, my vomit-free streak continues, and all I have to show for it is a picture of my dry heaving while a vein nearly pops out of my neck. 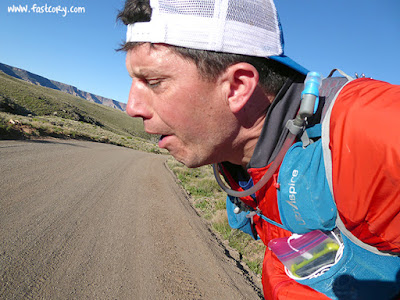 I made it up to Guacamole, ran the Guacamole Trail, then back down. I was at the point I had seen those runners hours earlier. I figured I probably looked as terrible as they did. I crossed the Virgin River and the cold water helped revive me a bit. 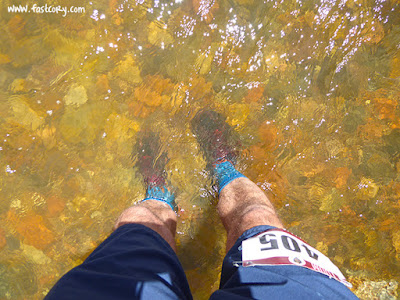 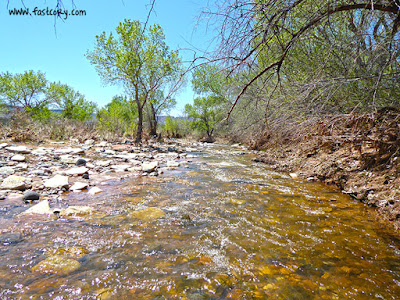 I got a text from Mel during the night that she dropped at mile 53. Thankfully when I was at mile 99 I found a special award to give her since she didn't get a medal. She is basically amazing. 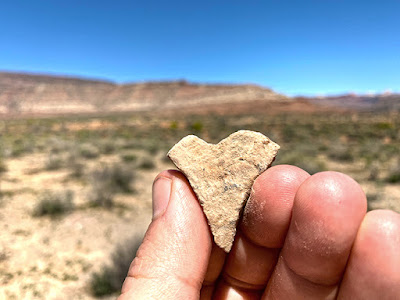 After 32 hours and 25 minutes I crossed the finish line. If you're willing to grant me a finish for 2016 when I ran the Zion 100 solo a few days before the official race, I've finished the Zion 100 eight years straight since the race first started.

Thank you for another beautiful chapter in our love story together Zion 100. 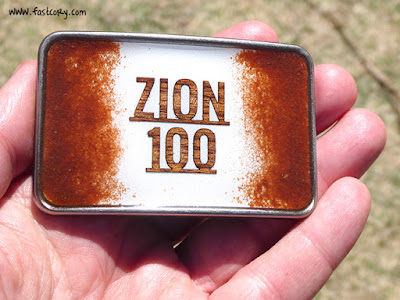 Thank you Vacation Races for another stellar race. Thank you Altra, St. George Running Center, Tailwind Nutrition, UltrAspire, and Injinji for supporting my running adventures. Thank you Mel, Jackson, Dani, and Ky for being the coolest family a guy could ever hope for. Thank you Jerry Maguire, Whitney Houston, Beyonce, and Bryan Adams for your cheesy sayings about love.
Posted by Cory Reese at 4:06 PM 57 comments: