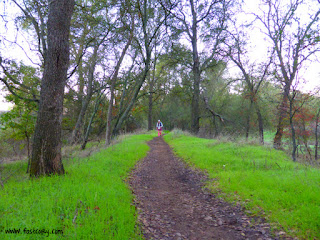 1) On Tuesday I realized that despite doing some 100 milers earlier in the year, I didn't have a Western States qualifying race.
2) I realized that the last WS qualifying race was coming up in California in a few days.
3) I mentioned the Rio Del Lago 100 to Mel and she said "Go for it!"
4) I packed my stuff, then headed to California two days later.
5) I drove for about nine million hours on the Extraterrestrial Highway where there is SOOOO much nothing to see. 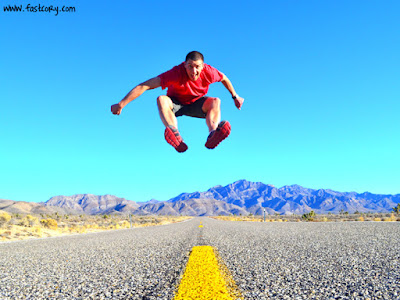 6) In the absolute middle of nowhere I passed by Area 51 and made a quick stop at the Alien Testing Facility. (Not making this up.) I can now check off the box on my bucket list next to "Take a jumping picture next to a gigantic metal alien." 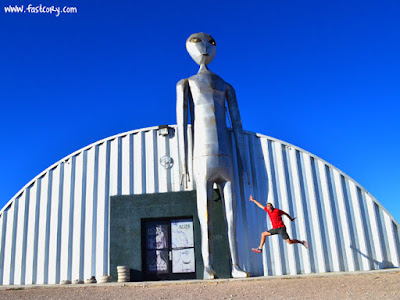 The next morning I found myself at the starting line of Rio Del Lago. For the first mile or so I had fun talking with Don Freeman from Trail Runner Nation. There is one minor detail about this: Don runs fast. And I run like a sloth on Ambien. So I told him to go on ahead. Pretty soon we experienced an amazing sunrise over Lake Natoma. 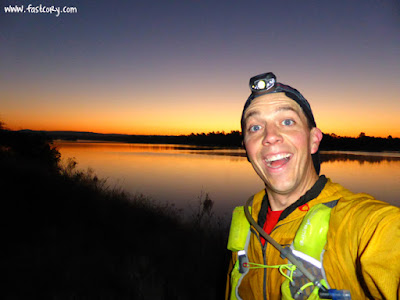 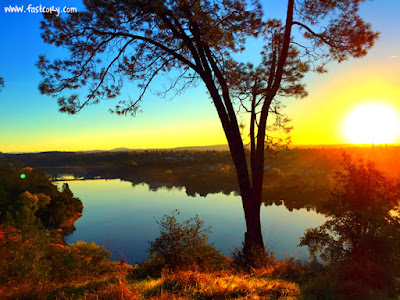 The first 19ish miles are mostly a paved bike path. I didn't mind it, but I hear those 19 miles screw up a lot of people's races because they go too fast and burn out their legs. I focused on running smart and conservative. If you have to run on a bike path, this isn't the most horrible scenery ever. 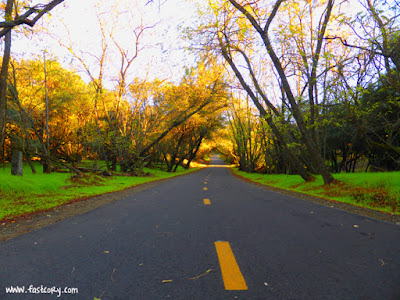 The first part of the race had some runnable dirt too. I commented to another runner how cool it was to see green during a run. In southern Utah I see mostly red. 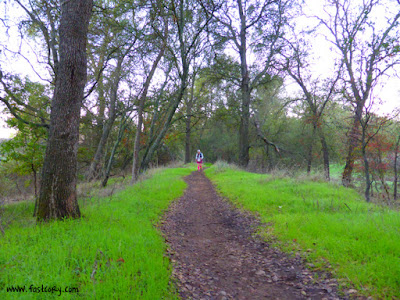 And then we reached this part of the trail surrounded by trees. The trail had this little bend in it and I heard the trail say "Hey, look how photogenic I am!" And I was like "Wow, you're not kidding! Stay right there. Don't move! Let me grab my camera!" 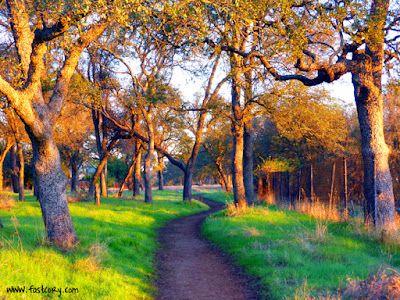 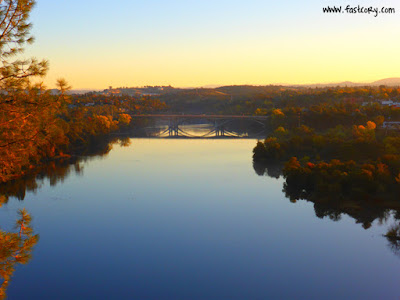 I was feeling pretty good overall. For gear, I was using the Altra Olympus shoes, the UltrAspire Velocity pack, a jacket from St. George Running Center, Tailwind Nutrition for my fuel, some Injinji socks, and a fist full of candy at each aid station. I got to one aid station and had a celebrity sighting. I decided it would have been rude to mention that her pant suit was stiff as a board and had huge creases in it. 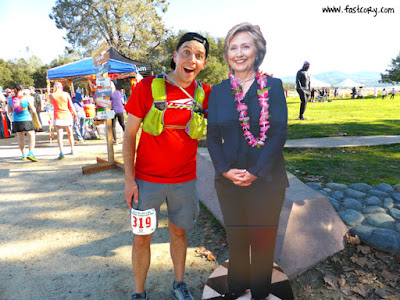 The middle section of the course was really tough. There was a long stretch on a trail called "The Meat Grinder". The thing I don't understand is if your legs have been through a grinder, how do you UNgrind them? After about 25 miles, my legs had no energy. They felt like a fuming pile of toxic sludge. 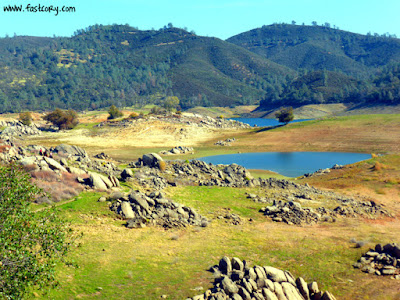 To be honest, I didn't think my legs would get better. You can't ungrind stuff. You can't ungrind hamburger back into a New York steak. But somehow after a few hours of running I noticed that my legs didn't feel like toxic sludge anymore. I was very thankful. 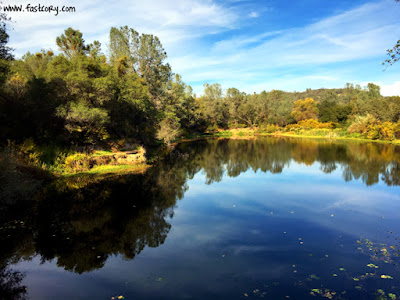 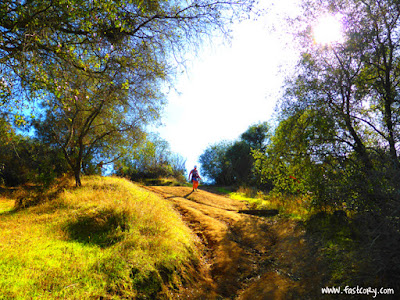 All along the course were these huge pine cones almost as big as my head. 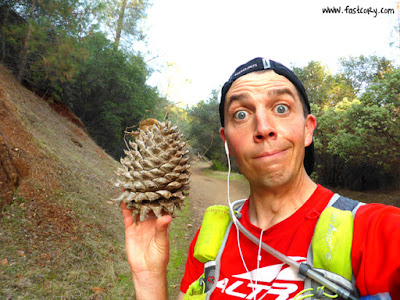 By early evening it started to cool down. Pretty soon I could see my breath, but I was still running hard enough to be sweating so I didn't need to put a jacket on. 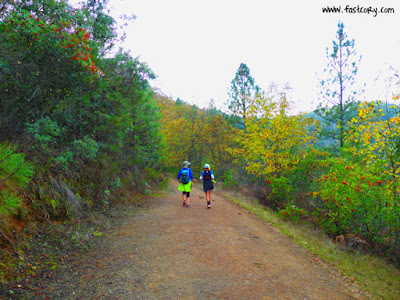 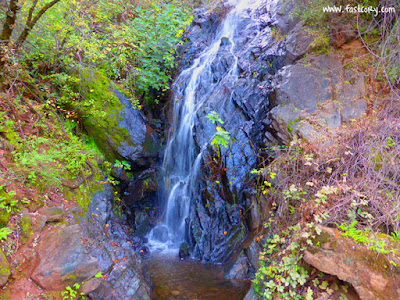 The night absolutely WRECKED me. I struggled so much with sleep deprivation. At two points I just plopped down in the middle of the trail to rest my eyes. I really struggle when I get so tired that it feels like the fatigue is suffocating. I know there are bears and mountain lions out in these areas. I ran for most of the night by myself but never felt too scared because I knew there were always runners not too far ahead or behind me. 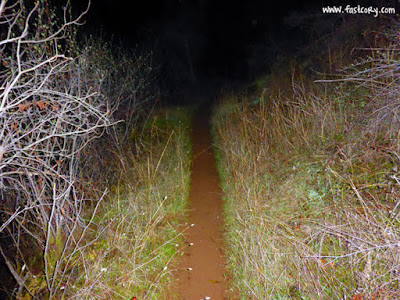 There were some big climbs during the night. On one climb, it was so steep and so long that when I got to the top I almost barfed. And then there were a bunch of river crossings. I'm as coordinated as a filing cabinet so I prayed that I wouldn't slip on one of the loose rocks and end up with wet shoes. 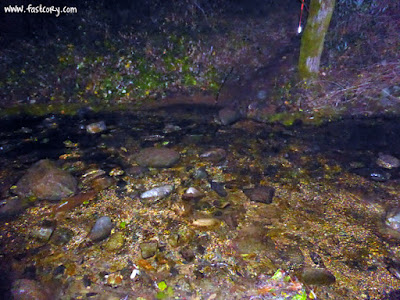 I can't tell you how much the night sucked. The climbing. The cold. The exhaustion. It really took a toll on me. I suddenly realized that I was right up against cutoffs. I didn't understand (and actually still don't understand) how I got into that predicament. I felt like despite struggling through the night, I had done pretty good overall. But here I was, up against cutoffs.

I got to the aid station at mile 84 only five minutes ahead of the cutoff. We had to go back across the long Meat Grinder Trail. I asked an aid station volunteer "Is this even possible?" Maybe I was looking for an excuse to drop. She handed me a breakfast burrito and a cup of Coke, then she looked me in the eyes and said "You'll have to run the downhills hard. You'll have to hike the uphills as fast as you can. You have no time to spare. But you can do this. Go get it!" I'm so thankful for her pep talk. I could have shed a tear...if I had any fluid left in my body. 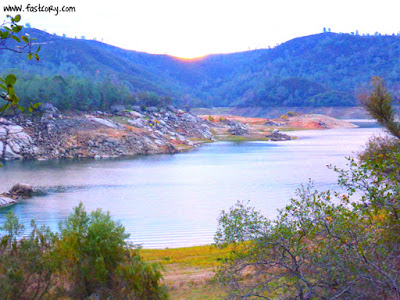 As the sun came up I sent a quick text to Mel. "Very close to cutoffs but I'm hurrying. I think I can make it." She wrote back "You can do it! I know you can!!!! We are cheering for you!" I ran as hard as I could for hours. Then I heard something so incredibly wonderful. I heard music from a loud speaker. I was getting closer. I was going to finish! I crossed the finish line with about 10 minutes to spare before the 30 hour cutoff. I have never had to fight so hard to beat cutoffs. 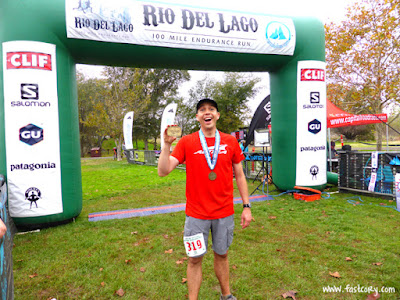 I don't think there is anything like a 100 miler to take you through the highest of highs and the lowest of lows, and completely wreck you, and put up so many impossible barriers along the way, and then show you that you can do the impossible if you just keep working and don't give up. It sounds cliche to say that the harder you work for something, the more it means to you. But that idea is never more clear than at an ultramarathon. The harder you work for that finish line, the more it will mean to you. A belt buckle is proof that you can overcome the impossible. 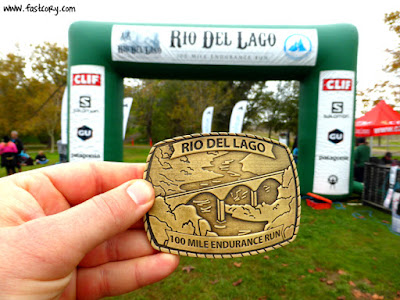 Do you want to know how tired I was after the race? I bought a pint of Ben & Jerry's ice cream....and let the whole thing go to waste because I was too tired to eat it. That's absolutely criminal! The next day I had a miserable 12 hour drive home but I was so happy to see my family and thank them for cheering me on from home. My daughter Danica had this sign waiting for me. 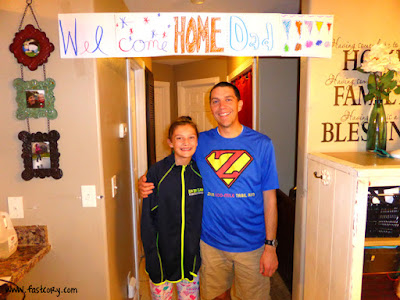 So now I have that Western States qualifying race. And I didn't get eaten by a mountain lion. And I have a belt buckle that I worked really hard for. And I have photographic proof of my jump next to a gigantic metal alien. Life is good. So good.
Posted by Cory Reese at 7:02 PM 23 comments: