Thanks to some extended time in an airplane, I just finished reading a fantastic book by Dean Karnazes called Ultra Marathon Man. Definitely a must-read for any runner. Here are some of the best quotes from the book. I dare you to not be inspired. 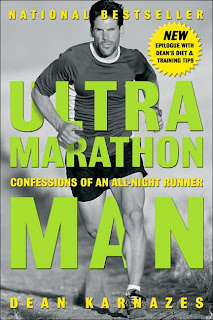 Dean had a mental breakdown of sorts on the night of his 30th birthday and realized his life was going nowhere. Out of the blue he started running that night, and finally wore out after 30 MILES! Following this he said:
“And that’s how I became a runner once again. In the course of a single night I had been transformed from a drunken yuppie fool into a reborn athlete. During a period of great emptiness in my life, I turned to running for strength. I heard the calling, and went to the light.

“For weeks after my thirty-mile jaunt I was nearly incapacitated from muscle spasms and inflammation. But it was a good hurt, one that would make Coach McTavish proud. As I limped around my office, trying to appear natural, I remind myself that pain and suffering are often the catalysts for life’s most powerful lessons. A passion I’d ignored for half my existence had been serendipitously reignited in one all-night thirty-mile hullabaloo. The resulting ice packs and tubes of Ben-Gay were a small price to pay. Every devout runner has an awakening. We know the place, the time, and the reason we accepted running into our life. After half a lifetime, I’d been reborn.”

“Some seek the comfort of their therapist’s office, others head for the corner pub and dive into a pint, but I choose running as my therapy. It was the best source of renewal there was. I couldn’t recall a single time that I felt worse after a run than before. What drug could compete? As Lily Tomlin said, ‘Exercise is for people who can’t handle drugs and alcohol.’”

After mile 73 at The Western States Ultra Marathon: “Pain is the body’s way of ridding itself of weakness.
Wait a minute, I thought. What was it that Coach McTavish had said? “If it feels good, you’re doing something wrong. It’s supposed to hurt like hell.” Perhaps I was doing something right here. Perhaps I was actually purging my body of weakness. Instead of trying to suppress it, maybe I should relish the pain, celebrate it. Maybe I like pain…”

“Somewhere along the line we seem to have confused comfort with happiness. I’ve now come to believe that quite the opposite is the case. Dostoyevsky had it right: “Suffering is the sole origin of consciousness.” Never are my senses more engaged than when the pain sets in. There is magic in misery. Just ask any runner.”

“There’s really no mystery to what I do, however. It hurts me just as bad as anyone else. I’ve just learned an essential insight: your legs can only carry you so far. Running great distances is mostly done with your head…and, as Benner taught me twenty-five years ago, your heart. The human body is capable of amazing physical deeds. If we could just free ourselves from our perceived limitations and tap into our internal fire, the possibilities are endless.”

His stories of running 100+ miles are entertaining, funny, and inspiring. It’s amazing to me that he decided at age 30 to become a runner, and eventually became one of the elite athletes of the world.
Posted by Cory Reese at 7:35 PM