Monday, July 20th 2009: 30 minutes on exercise bike. My legs were insanely sore from the half marathon. I think this was due to 1) the insane hills, and 2) me being a fool and not stretching after the race. It hurt to move. I was actually looking forward to riding the exercise bike to stretch out the legs a little.

Tuesday July 21st 2009: Walking 30 minutes on the treadmill. I woke up early to run a few miles before work. My legs had different plans. I got 4 houses away and my legs hurt so bad that I had to come back home. I ended up just walking that evening. WHY DIDN'T I STRETCH AFTER THE RACE?!?! That was as foolish as this guy's haircut: 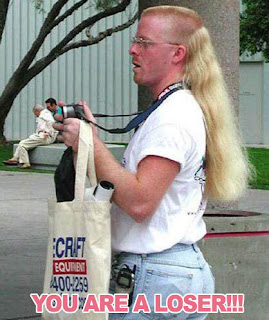 Wednesday, July 22nd 2009: 30 minutes on exercise bike. By Wednesday night my legs were barely starting to ease up.
Thursday, July 23rd 2009: 4 miles in 44 minutes. I just went slow, and thought about how those 4 miles justified the scrumptious Very Berry Sunday I ate from Costco earlier in the day.
I also thought about how cool Mel is. Before I left for my run she asked if I'd make her a training calendar for the next few months. Despite her mishaps at the Bryce Canyon Half Marathon, she said she wants to run the half marathon through Snow Canyon in November. I'm proud of her.
Friday, July 24th 2009: 20 minutes on exercise bike. The Dansie's coordinated their second annual Pioneer Day 5k run. My legs still hurt so I was happy to help them with timing instead of actually running.
Saturday, July 25th 2009: 9 miles in 1 hour and 30 minutes. The run went okay except for my right ankle that is still achy. My legs held out okay though. Holy deodorant, it was sure warm and muggy in the morning. Nobody would have wanted to do this to me: 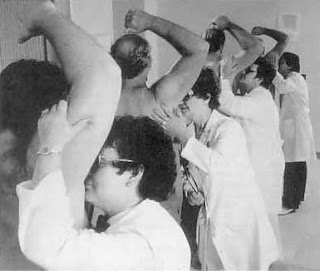