Monday, August 31st 2009: 5 miles in 47 minutes. I went out at about 10pm and it was still pretty hot outside. Despite this I felt pretty good and was able to keep a decent pace without spontaneously combusting.

Tuesday, September 1st 2009: 40 minutes on exercise bike. This was the epitome of thrill and excitement for the day. My family had to beg me to get off because I was enjoying myself so much. The amount of fun I had defies description.

Wednesday, September 2nd 2009: 20 miles in 3 hours and 25 minutes. Due to some last minute changes with me and Mel's work schedules I decided to get in my final 20 miler before the marathon.

I tried something different for this long run. To get my mind off of pain I decided I'd try listening to an audio book during the run. I chose the book "Complications: A Surgeon's Notes On An Imperfect Science". It was okay for the first few hours, but eventually I reached my limit on crazy medical stories.

This run was pretty boring and lonely. There was nothing along the route to keep my attention except for this cool bright leaf laying on the road: 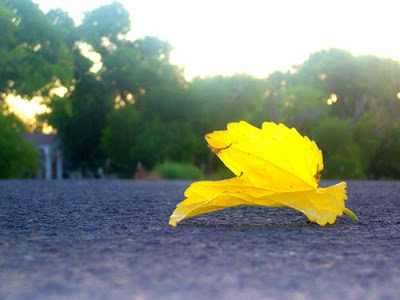 I averaged a 10:15 pace but that doesn't take into account the rest breaks I took to get drinks and stretch. By the time I finished I felt like someone had locked me in a clothes dryer. I was spent. At the time I finished the run it was 90 degrees. If it is that hot during the marathon I shall surely die.

Thursday, September 3rd 2009: Rest. I have reached a glorious point in my marathon training: THE TAPER!!!! Common marathon training recommends doing a 20 miler about a month before the marathon, then decreasing your mileage over the last month so your body is recovered and ready for the marathon. I am thrilled with the idea of tapering down my training. Hallelujah.

Friday, September 4th 2009: Rest. I'm going to say I "carbo-loaded", but really it was just bad eating habits. Breakfast: 4 pieces of toast. Snack: a baggie of trail mix. Lunch: 2 frozen burritos and a cookie. Dinner: Little Caesars Pizza. "Healthy" is likely not a word someone would use to describe my diet.

Saturday, September 5th 2009: Peach Days Race: 7.4 miles in 1 hour and 8 minutes. The Peach Days race is unique: you guess your time before the race and the winner is the person who gets closest to their time. You can't use a watch and they don't tell you the course until right before the race starts. I really enjoyed running with my friends Darrin, Amber, and Shane. It was fun to talk about casual stuff and hang out (except for the fact that we were running 9 minute miles).

Mel ran too and did well. We tried to take a nice picture after the race but our friends Alex and Cherie had other ideas. It's just downright rude that we try to take a serious picture but then they pop their inconsiderate heads in. You would need an incredibly thick skull to not realize we were trying to take a serious picture. I don't know how they live with themselves. 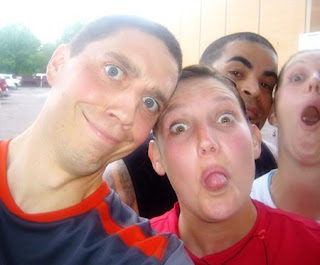 Aside from a few minor aches I felt good during the run, except for one wardrobe malfunction. I wore a new shirt which was supposed to "wick away moisture". I have other shirts that are great at this. The new shirt, on the other hand, was a failure. And any runner will attest to what happens after running lots of miles with a wet shirt: 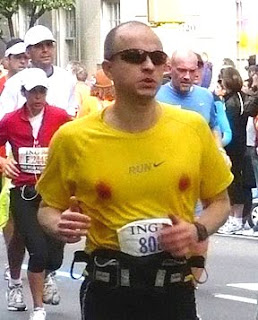 By the grace of God I was able to avoid blood, but had I run a few more miles I may have been in trouble. This picture very likely could have been me.

I averaged a 9:12 pace which I was happy with. I was only two minutes off my guess which put me at 20th place in the whole race. So guess how much money I won........$9.00!!!! This should cover the expense of buying Band-Aids and Neosporin for my nipples.
Posted by Cory Reese at 8:55 PM