Wednesday, December 30th 2009: 4 miles at the track. I decided I'd see how my knees would hold up for speed training. This was my first speed workout at the track in many months. It was cold and snowing so I had the track to myself. I questioned my sanity.

The knees felt fair for the four 800's (twice around the track) that I did faster. My times were 3:34, 3:46, 3:57, and 4:02. It was really strange, but it felt really good to have a few fast bursts where my lungs were burning and my stomach struggled to keep the barf down. I didn't care to make a mess on the track.

Thursday, December 31st 2009: 1st Annual Beat The New Year 5k. Our running buddy Karrie set up a very informal, no-pressure, fun 5k around the neighborhood. It was the most enjoyable 5k I've ever run (stomach was never tempted to hurl Gatorade). We just jogged as a group of friends, and finished up with some donuts and hot chocolate. 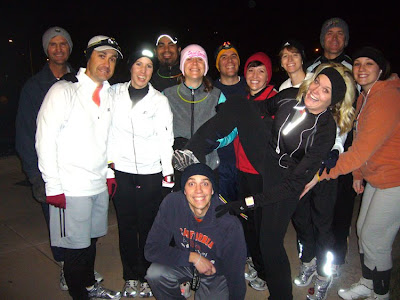 Friday, January 1st 2010: 1 hour & 15 minutes of trail running. I decided I was letting my training calendar determine my running instead of how my body was feeling. So I left my watch at home to ensure I was enjoying the scenery instead of focusing on my pace.

I ventured behind our house to Confluence Park. I am truly ashamed to say that in the years we have lived here, I'd never left the pavement to go explore this area less than a mile behind the house.

The views were beautiful and amazing as I scampered along the Virgin River. I cursed myself for not bringing my camera. I promise I'll go back again soon to take some pictures for the site. I realized after a half hour that I had forgotten my mp3 player. I'm SO thankful I forgot.

Saturday, January 2nd 2010: 1 hour & 35 minutes of trail running. I headed out on another nearby trail in the Red Cliffs Desert Reserve for my Saturday run. I thought the trails may be easier on my knees.

I can't describe how amazing this run was. The softer surface made my running almost painless. I cruised up hills and down hills and went fast for the whole time. I hadn't spent much time on these trails so I wanted to run everywhere I could and explore. I wanted to see where each trail led.

I again didn't take my watch, camera, or mp3 player. It was so fun to be out on trails by myself with nobody in sight. I went to the bathroom four times --- just because I could. Not being among neighborhoods and traffic was freeing.

On my way home I realized what an enormous difference the softer surface made. I had to run on pavement for the 1/2 mile back home. Going from soft trails to street made my knees hurt almost immediately. I couldn't believe how much more impact I felt with each step.

I will definitely be going back to these two areas, both for picture-taking and running. After being on these trails it makes me wish I never had to run on the road again.
Posted by Cory Reese at 2:20 PM