26.2 miles. I. Ran. 26.2. Miles. It is inconceivable (I watched The Princess Bride yesterday after the race.) I truly believe this is a miracle. With my terrible, achy knees, I feel so blessed that my body was able to carry me this far.

I was looking forward to the Utah Valley Marathon as my second marathon. We had a great day before the race. We started with a carbo-loading breakfast at Einstein Bros. Bagels. Mercy. I have never eaten a better bagel. 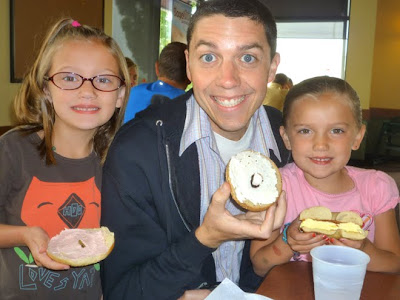 Then we headed to Provo to drive the course of the marathon. It's helpful to know what you're getting into. I spotted a 7-11 along the route and immediately slammed on my breaks to stop and grab a Slurpee. Coming across this sweet, holy, pina colada nectar was surely a good omen. 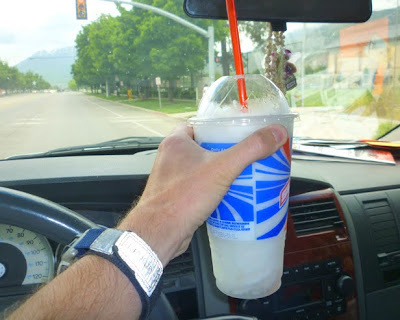 The marathon started far up the Provo Canyon and we were able to run past the beautiful Bridal Veil Falls: 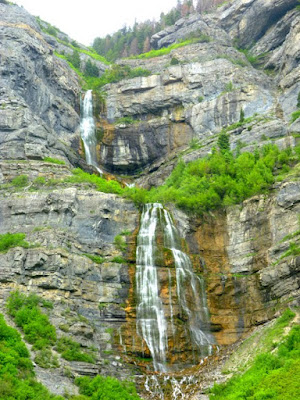 The girls loved seeing such a pretty waterfall. 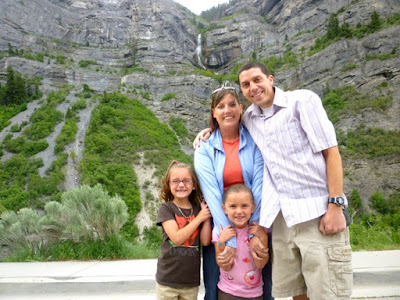 There were a few parts of the course that were simply amazing. My favorite part was this bright red barn nestled against the mountains: 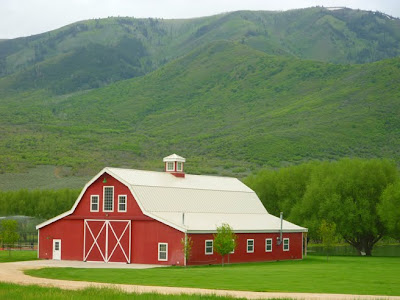 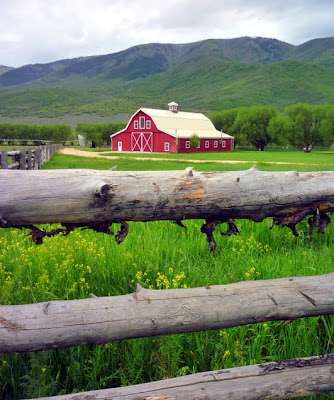 We finally reached the starting line of the marathon – which would be a completely different scene a few hours later: 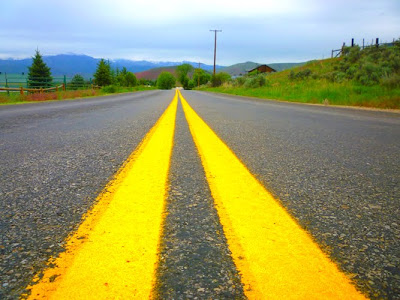 Overall, the course seemed nearly perfect. There were a few semi-intimidating hills, but nothing I hadn’t done before so I was feeling optimistic. Then again, when you have a pina colada Slurpee in your hand, it’s impossible to feel anything except happy. I saw one more thing worth stopping for as we finished driving the course – this cool old truck: 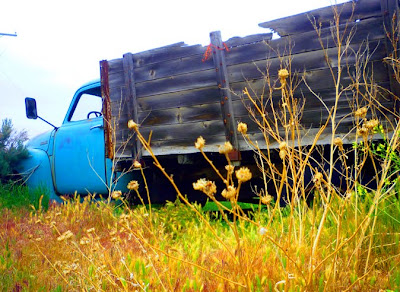 There WAS something I was feeling nervous about: RAIN. It had been raining all day. And the forecast for race day: RAIN. The dark clouds and downpour were daunting. 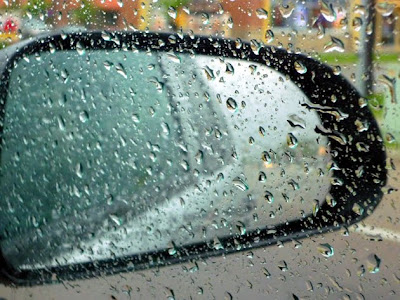 The day of the race, June 12th 2010 was a special day for another reason: it was me and Mel’s 12th anniversary. I thought it might be fun to surprise her with a little sign on my shirt (which led to many spectators yelling “Go Mel!”). I could understand how having your name on your shirt could give you an emotional boost. 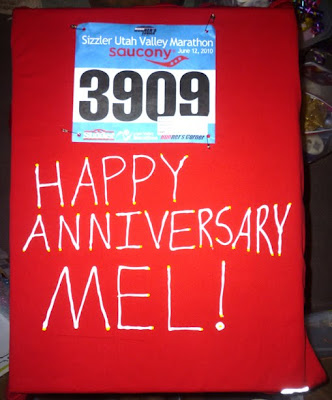 My alarm went off at 2:20am. Yes, 2:20am!!! (Not that it mattered, I couldn’t sleep anyway). I loaded the bus at 4:00am and somehow managed to get on the same bus with the only other person I knew doing the race: my friend Renee. She is CRAZY and INSANE spontaneous and signed up for the marathon the day before. I really loved having someone to talk to in the time leading up to the 5:30am start.

I brought a poncho. But before the race started, it stopped raining. It seemed like it might be clearing up. So I put the poncho in the gear collection truck. I’m not exaggerating – two minutes later it started raining again. By then my bag was buried amid hundreds of other bags in a U-Haul. Ugh.

A gun went off and the race started. My body was feeling good, except for my knees which were a little tight from the cold. Not bad though. It kept raining. And raining. It was mile 7 when the water started soaking through my shoes. I felt some hot spots on my feet but amazingly managed to finish the race without a blister or black toe nail!

Finally at mile 13 it stopped raining. I took off my long sleeved shirt which I later regretted. It was completely soaked, but at least it was protecting me from the wind. Around mile 14 we reached one of the bigger hills on the course – and my wheels fell off. I didn’t feel like I had hit a wall, it just felt like I was starting to run out of gas.

“Marathoning is like cutting yourself unexpectedly. You dip into the pain so gradually that the damage is done before you are aware of it. Unfortunately, when awareness comes, it is excruciating.” ~ John Farrington, Australian marathoner

I was really cold the last half of the race. At one aid station I grabbed half a banana. My fingers were numb so I had a hard time getting the peel off. My brain was maybe a little loopy too because I looked down and realized that I was eating part of the peel.

At some point I realized I was not going to make my goal time. That’s a weird feeling. A part of me felt a little discouraged. And a part of me didn’t care. I just wanted to get to the finish line. I thought of possible excuses (I only got an hour and a half of sleep … it was raining … they didn’t have Slurpees at any aid stations) but to be honest, none of those are valid excuses. The course and the temperature were actually perfect. I would MUCH rather be too cold than too hot. I felt like my skin was melting off during the St. George Marathon but didn’t feel like that at all during Utah Valley. I just happened to be a little slower than I'd hoped.

The last six miles were really hard. My legs were in knots and tight as violin strings and I was completely out of gas. I was in good company though. Everyone else around me was doing the marathon death shuffle too. Watching everyone trudging along made me laugh out loud (mainly to keep myself from crying).

Along those last six miles, there were two guys that I passed and was passed by at least 4,729 times. We just kept going back and forth. We were trying to push each other to the finish line. At one point, I had a heart to heart talk with one of them. We made a promise to each other that if one of us died before making it to the finish line, we would call their wife and kids to tell them that we loved them.

Seeing the mile marker for mile 26 is one of the most INCONCEIVABLE things a human can ever lay eyes on. The pride in knowing your legs have covered twenty six miles is hard to explain. (PS: I hate the British for adding that extra .2 of a mile.) Mel met me at the last half mile and I had fun talking to her as I trudged to the finish line. Having her support meant so much to me.

I crossed the line in 4 hours and 37 minutes. It felt like someone had dropped a television on my legs. But I felt so happy. All those countless hours and miles of training had paid off.

"The pride in finishing a marathon is much greater than all the pain endured during the marathon." ~ Hal Higdon

The finish line had some great food. I enjoyed a Creamie and some Pizza. 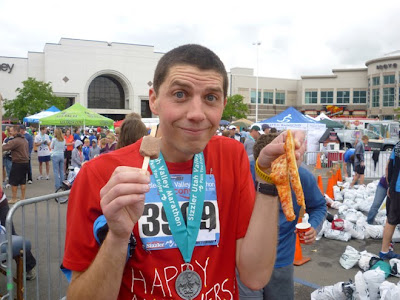 I was also happy to find Renee who did awesome at the race. 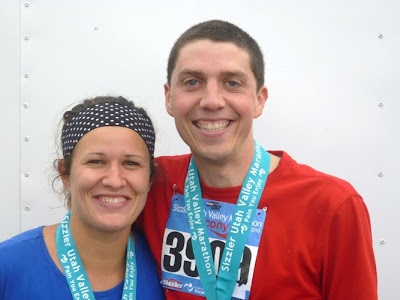 The marathon was extraordinary. I wouldn’t change one thing about it. It was an experience I will never forget.

(And to top it off, I finished the weekend with a few more Slurpees.) 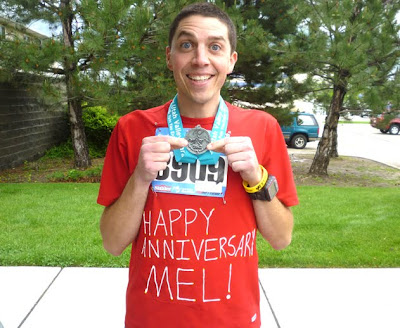 I run because it's so symbolic of life. You have to drive yourself to overcome the obstacles. You might feel that you can't. But then you find your inner strength, and realize you're capable of so much more than you thought.
Arthur Blank, American businessman and a co-founder of Home Depot 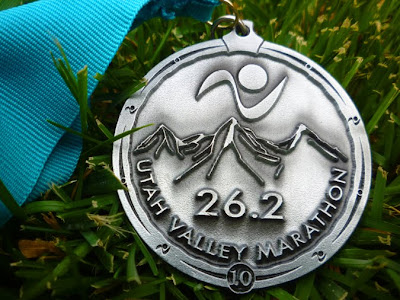