(Editors Note: For next week's post, I plan to answer some frequently asked questions such as "What do you listen to while running?" or "How do you take pictures and run at the same time?" or "What kind of shoes do you like?" To submit questions, email them to cory@coryreese.com)

I was really excited for my fourth marathon, the Top Of Utah Marathon in Logan, Utah on September 18, 2010. The coolest part was that this was my brother Kenny's first full marathon. Kenny and his family were gracious enough to provide some awesome pre-race carbo-loading and a comfortable bed to sleep try to sleep in.

I knew it was going to be cold before the race so I stocked up on disposable clothes from the thrift store that I could leave along the way while I was running. I dearly regretted not washing the clothes first because I could barely stand to be with myself due to my stinky clothes. Woops. And good grief - could I get any more red?!?! I looked like an over-ripe tomato for crying out loud! 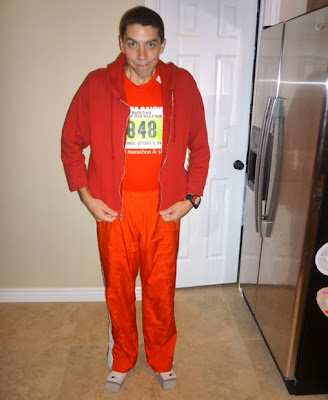 We joined around 2400 other runners at the starting line. Top Of Utah had the best race amenity I have EVER seen: a heat tent!!!! I ain't kidding you! There was an enormous canopy tent with propane heaters inside! It was splendid. Had I seen the race director I would have hugged him. 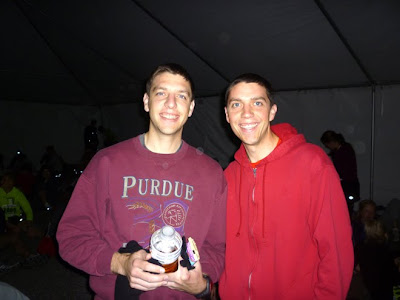 Finally the time arrived to leave our warm cocoon and head to the start line. As we were standing there I noticed this man's um, unusual pony tail (which strangely resembles the hair style of the GIRL next to him). We got a good chuckle out of that. I told Kenny "When the race starts, just follow the pony tail." 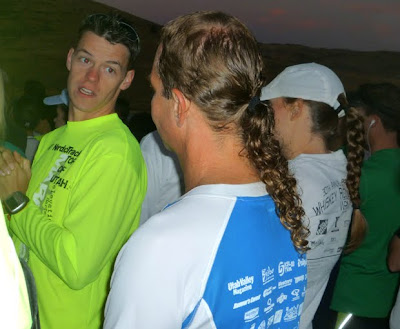 What? You want to see another picture of that awesome hair which screams "Business In The Front / Party In The Back"? Well, okay. 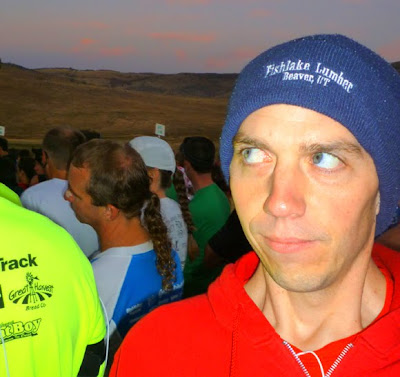 Later I felt guilty for making fun of his hair. I remembered that I was wearing a huge fake leather fanny pack from Eureka Casino that I bought at the thrift store. I figured that people would have good reason to make fun of me too. You better believe if I saw someone wearing a fat Eureka fanny pack I would make fun of him. 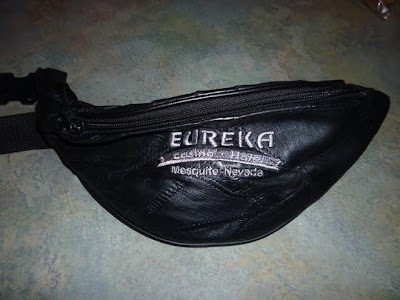 I was a glorious spectacle of mis-matched thrift store clothing. 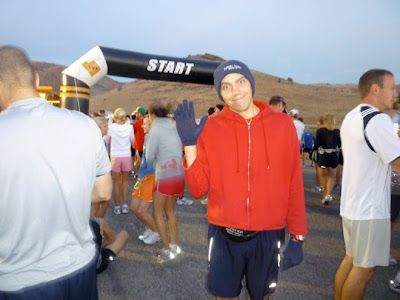 Some cool guys wearing lots of leather shot their muskets and the race began! I ran the first mile with Kenny and loved talking with him. But it was REALLY cold outside. My face was frozen and my lips felt like the dentist injected them with Novocaine. I quickly warmed up though. Overall it was ideal weather for a race. Ideal. 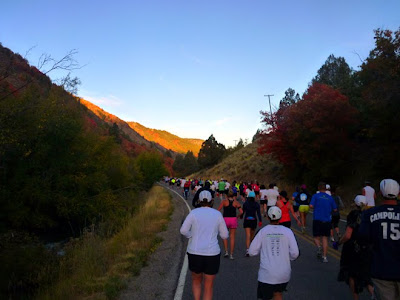 After the first mile I started my run/walk schedule where I ran 5 minutes then walked 1 minute. There were quite a few people around me doing the same exact thing. I heard one guy with an accent saying that he was doing 10 marathons in 10 weeks. He was doing the same run/walk and we ran together for the first 12 miles.

I really loved the elevation of this race. Most of the course was downhill but not steep enough to really pound your legs, although the first half was definitely easier.

The scenery of the course was simply beautiful. I couldn't help but make lots of stops to take pictures. Seeing a steady stream of runners weave through the canyon was amazing. 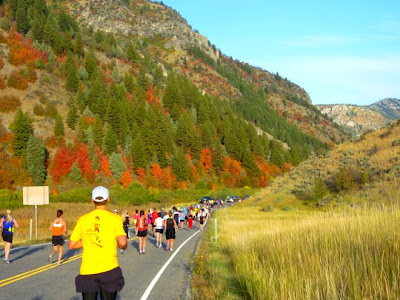 We reached a particularly beautiful area next to a river. The other gaggle of run/walkers seemed to be much more focused on having a fun experience as opposed to hard racing. They hung out here for a bit to take pictures of each other. They didn't seem too rushed so I asked one of them if they'd snap one of me too.

"And the award for Cheesiest Smile Of The Day goes to.......Cory Reese!" 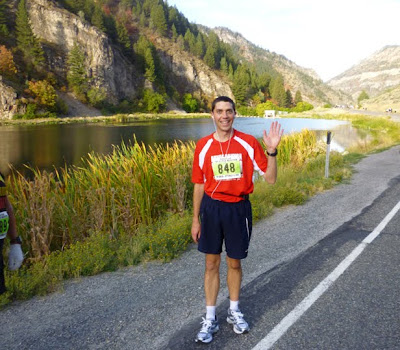 By mile 16 I was still feeling incredible. I decided I would start to speed up a little bit. In retrospect I think it may have been better to wait until mile 18 or 19, but it worked out okay. At mile 22 something cool happened. I was listening to the song "Marching On" by OneRepublic and I realized that even though I was getting tired and sore, I was still running. I may have (did) start to tear up because I felt so, so thankful. I felt so thankful for the body that my Heavenly Father gave me. I felt so thankful for my wife and kids and support for my family. I felt so thankful that even though I was really tired and sore, I was able to keep running. I'm not athletic or coordinated or fast, but gosh darn it, I'm stubborn. And you can do a lot of things when you are stubborn.

I made sure to give a high five to every person I saw. It gives me a good adrenaline rush. The countless volunteers for the race were beyond exceptional. They were so helpful, kind, and energetic. There was also good crowd support. My brother saw a sign that said "Running Is A Mental Sport - You Are All Insane!" I saw this sign and had to stop to take a picture: 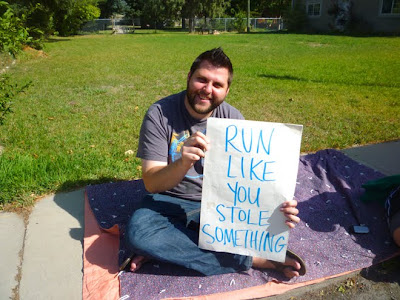 My main complaint about the race was the fact that they screwed up measuring the last mile of the race. I swear to you, that last mile was at least 7 miles. Or at least that's what my legs were telling me. I finally saw the finish line and made lots of fist pumps accompanied by an ample supply of hollering. And then I was on the happy side of the finish line with a finishing time of 4 hours & 38 minutes!!!! I was thinking I'd be much longer than that so I was very happy. Kenny's girls made a very cool sign: 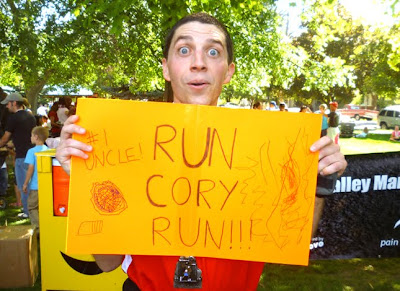 And Kenny????? Well, he ROCKED!!!!!! He finished at exactly his goal time of 4 hours & 30 minutes! I felt really proud of him for such an awesome accomplishment. With Kenny's crazy work schedule and traveling, it is so impressive that he has been so faithful with his training. I hope to be able to run a marathon again with him sometime in the near future. 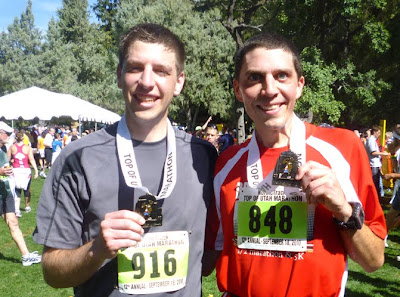 And so my fourth marathon is complete. Marathon #5, the St. George Marathon is coming up in two weeks. Even though it's only one day after Top Of Utah, I can't wait to do it again. 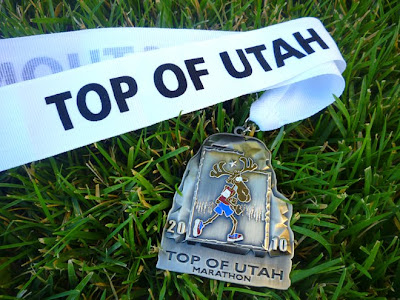 "Part of the challenge of the marathon is pushing past what you think is physically possible. You can do more than you think you can."
~ Christine Hinton, running coach
Posted by Cory Reese at 8:52 PM