The Red Mountain 50k was my first official ultramarathon if you don't count last month's 50 miler. I'm going to tell you a secret: my knees were hurting so bad last week that I told Mel I might have to drop out of this race. I wanted to stay optimistic, but deep down I knew I might be in trouble. I decided to give it a try and just see what happened.

The bus ride to the starting line was ultra-long. Honestly. I could have watched the whole Harry Potter movie series during that bus ride. We got off the bus and it was COLD outside with a decent wind. After about two minutes of that nonsense, we got right back on the bus and waited until it was time to start. 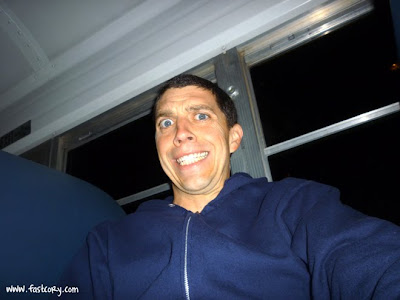 The first 12 miles of the race is on dirt and the rest is on pavement. Considering the problems I've been having with my knees, I planned to start very conservatively. I quickly realized that the ultra-steep uphill and ultra-steep downhill of the first few miles was going to be murder on my knees. 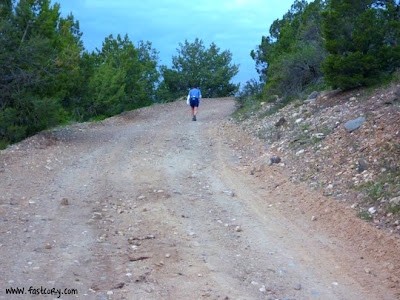 Thankfully the incredible scenery made up for the beating my knees were taking. 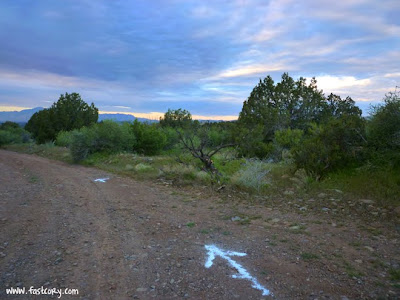 At one section of the trail I paused to watch the sun rise over the hill. This was one of my favorite pictures of the day. 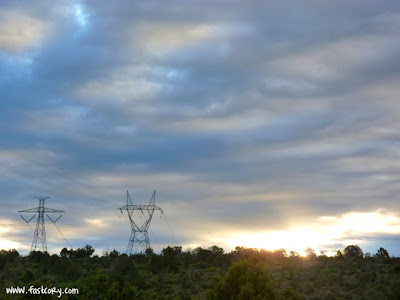 A few minutes after I passed the Mile 9 aid station I reached a river. The only runner I had seen for a few miles was this guy who charged right through the river. 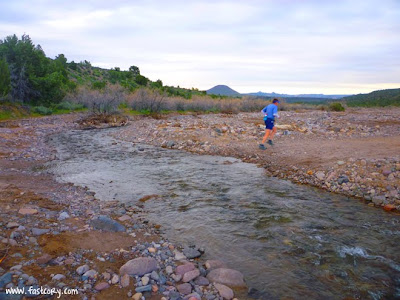 There was the option to leave a change of shoes for the Mile 12 aid station but I chose not to because I didn't know we'd be crossing a big river. I walked up the river to find a shorter distance to cross. No luck going down river either. I didn't want to run through it and have wet shoes for the next 22 miles so I sat down, took my shoes off, and waded to the other side: 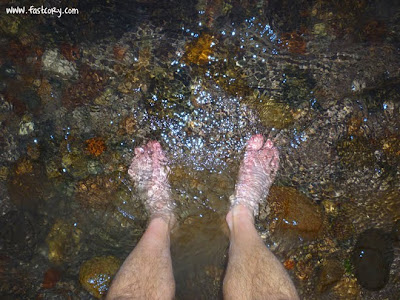 After I put my shoes on again I started running up another ultra-hill. I had run a mile past the river when I thought I saw a group of around 15 runners charging toward me! I figured it was too early in the race to start hallucinating. Sure enough, they were running the other direction. Apparently they had gone farther up, hadn't seen any course markings, and realized they had gone the wrong way! 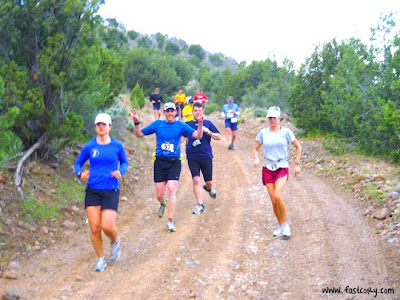 We ran a mile back to the river and had a pow wow about what to do. Someone concluded that we took a wrong turn and needed to go BACK across the river! So.......I took off my shoes AGAIN and waded back to the other side. Apparently a prankster sabotaged the course by changing the direction of the arrows. Standing at that river again with everyone was the craziest thing I have ever seen during a race. 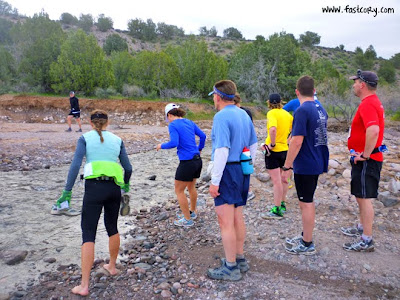 When we got to the next aid station I realized that I had run almost two miles extra. That made me nervous. My knees were feeling ultra-terrible from the loose rocks of the trail so I was ultra-thankful to finally reach pavement. 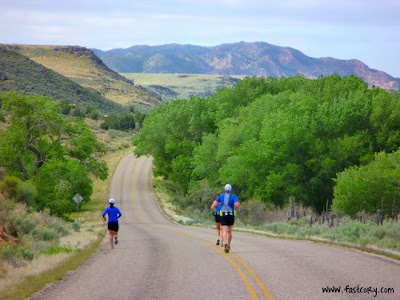 And then things got ugly. I met up with my friend Jason Smith at Mile 15 and neither of us were feeling too hot. I tried to stay with him for the next couple miles but I just couldn't do it. 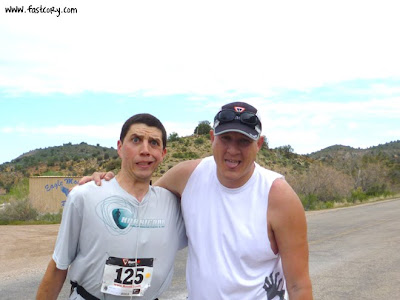 After this I reached a really low point. My knees just would not allow me to run for more than a minute or two. In my 33 years of life my knees have never hurt so bad. When I bent my left knee, it sounded like a bag of chips being crumpled. That wasn't too comforting.

I ran many miles by myself without another runner in sight, either in front of or behind me. By this point the extra two miles I had run from the detour were killing me mentally. It was so frustrating to arrive at the Mile 24 aid station as my watch showed that I had run 26 miles. Normally a few extra miles would be no big deal, but with my knees in dire pain, I was very concerned.

Eventually I could see a few runners creeping up behind me. I realized that I was part of the "Who Is Going To Win Last Place" competition. It was powerful and humbling to be part of a group of people who were experiencing such intense suffering. 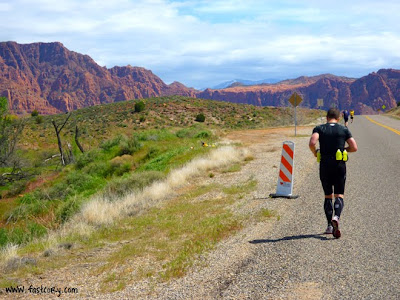 Sometimes I was able to run 30 seconds before walking. Sometimes I managed to only get a few steps before being slowed to a walk. Want to see what it looks like when you try to smile at the same time your knees feel like they've been run over by a train and your flesh feels like it's melting off your bones? This is what it looks like: 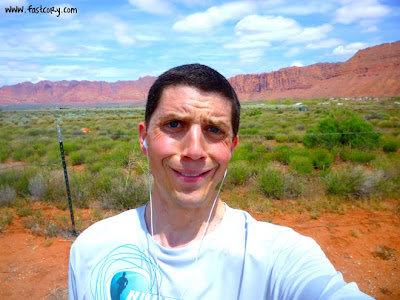 The scenery during the last mile of the race is amazing: 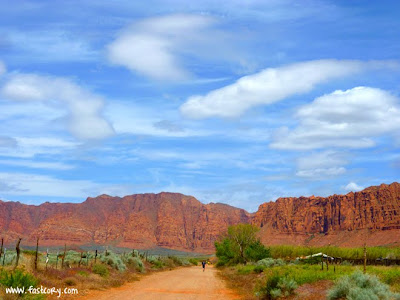 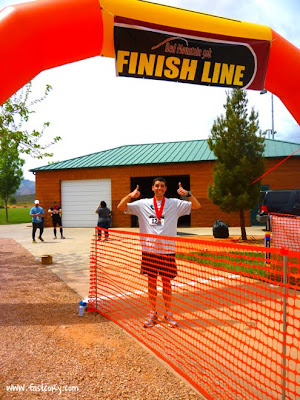 Now that I've had a day to digest everything that happened, thinking back on that experience brings tears to my eyes. I can't describe how bad my knees hurt during those 33 miles. I am so thankful God forgave my swearing and helped me make it through. I certainly didn't feel his help then, but I see it now.

Despite how I felt yesterday, I think this race did change me. This was the hardest thing I have ever done. I was shown again that I can do hard things. From now on, when I finish a race, I'm going to stick around and cheer for those people at the back of the pack. I have a new understanding about how people persevere amid suffering. I'm thankful I have a cool medal to remind me of the lessons I learned during this race. 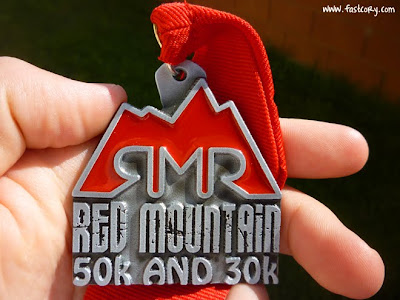