When I showed my new Hoka Mafate shoes to my seven year old daughter her eyes lit up. She said "Dad! You can be a clown for Halloween. And you can wear those shoes!" She has a point. 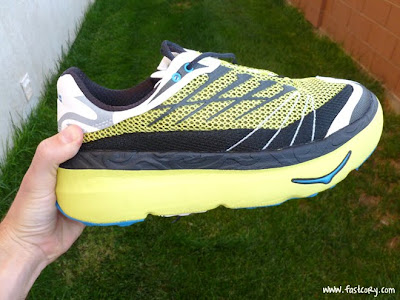 I had been intrigued by the Hoka shoes after seeing lots of top ultrarunners wearing them. They are the complete opposite of minimalist shoes. I love the book Born To Run. I've read it at least four times. I admire people who wear minimal shoes. But I'm very nervous to do anything that puts me at a higher risk for stress fractures. I ran 20 miles in the Hokas right out of the box and was in heaven.

The best way I can think of to describe running with Hokas is like running on bubble padding. Your feet still have support but more cushioning. Compared with other shoes, Hokas look heavy and bulky. 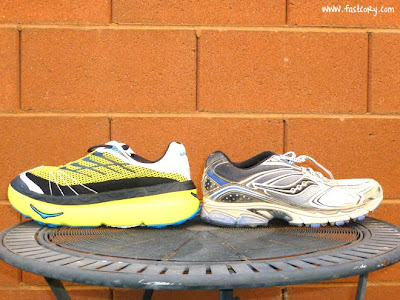 So I weighed them. My Saucony TR4 trail shoes weigh 12.8 ounces each. But the Hoka Mafate only weighs 12.3 ounces each! I was surprised by that.

I was also worried that being higher off the ground would make an ankle sprain more likely. I actually haven't had any more trouble with that than I normally do running trails. The Hokas run a little small so I bought a half size bigger than I normally wear.

I have been running in these for a month now. I wanted to have plenty of experience with them before I told you about them. I have experimented with them a lot. I have run 10 miles in my Sauconys then switched mid-run and wore the Hokas for 10 miles. Another time I ran 10 miles in the Hokas then switched mid-run to Sauconys and ran another 10 miles. Doing this showed me how dramatically different the shoes are.

My biggest hesitation in buying the shoes was the $170 (gulp) price tag. When I found them on sale I decided to take the plunge. That was one of the best decisions I've made all year. (They have a road version called Hoka One One Bondi B.) Plus the Hoka Mafate has more cushioning if your legs spontaneously jump into the air. 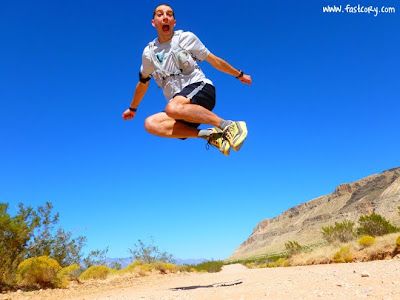 I can't minimize the enormous price tag. That is a crazy price to pay for shoes. And if I didn't have a discount and wasn't running high mileage I'm not sure I could justify the cost. But in training for my first 100 miler, these shoes have positively saved my feet and knees enabling me to do lots of high-mileage training.

Now I just need to add a wig and big red nose to my clown costume.
Posted by Cory Reese at 7:02 AM