Most Miles Ever - 75 This Week

Monday, October 3rd 2011: Rest. The benefit of doing the St. George Marathon on Saturday at mock-turtle pace was that I didn't feel one bit sore afterward. I took a rest day just to be safe.

Tuesday, October 4th 2011: 5 miles @ 10:25 minutes per mile. I ran so early in the morning that I must have still been asleep. I don't remember anything from this run.

Wednesday, October 5th 2011: 30 miles @ 11:56 minutes per mile. I ran on the Warner Valley dirt road. I heard that a storm would be coming into the area. Even though it was overcast when I started, it kind of looked like I would miss it. 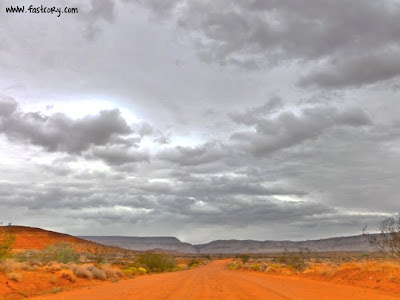 During the long run I listened to talks from the recent Church of Jesus Christ of Latter Day Saints conference which kept my brain occupied. I had two destinations that I had never run to: the Warner Valley Dinosaur Tracks and Fort Pearce. The trip to the dinosaur tracks (around 10 miles) was fairly uneventful. I kept an easy pace and focused on never getting out of breath. I was happy that I took it slow enough to not break a sweat until around 10 miles. 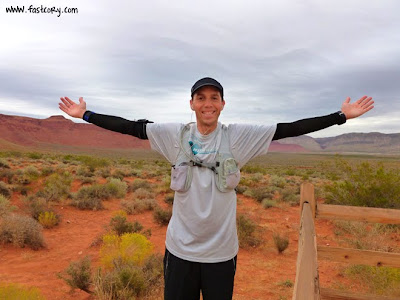 The dinosaur tracks were okay, although probably not worth making the trip again. The coolest part was knowing that I was standing in the same spot that I dinosaur had stood thousands of years ago. 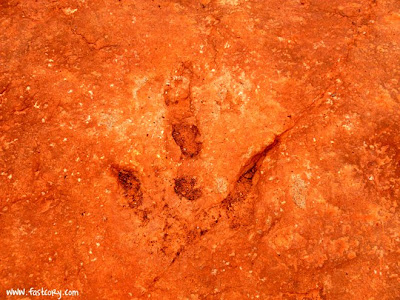 On to the highlight: Fort Pearce. I took a wrong turn and ended up wandering around for a few miles but finally found the fort after running about 15 miles. It was built in 1866 during the Black Hawk War. I've been reading a lot of local history lately so I was excited to check this place out. 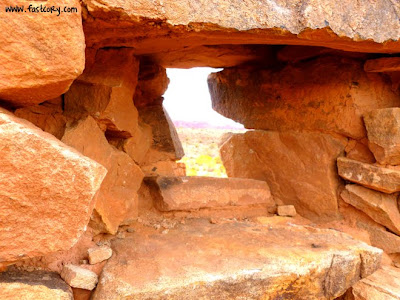 I only stayed a few minutes then headed for home. There were darker storm clouds rolling in which made for good pictures but also made me nervous. 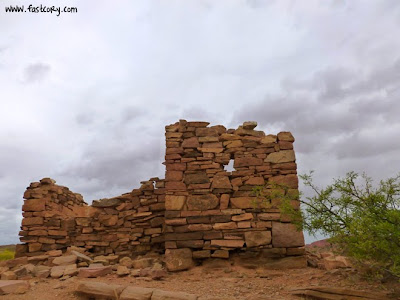 I started to feel a bonk coming on at about mile 20. I knew why. I wasn't sticking with my fueling plan. In ultras they say to eat 200-300 calories per hour. I wasn't even close to that. In my whole 30 miles I only had:
4 Gu packets
2 Vespa packs
1/2 peanut butter sandwich
60 oz. water
and then my saving grace at mile 20: 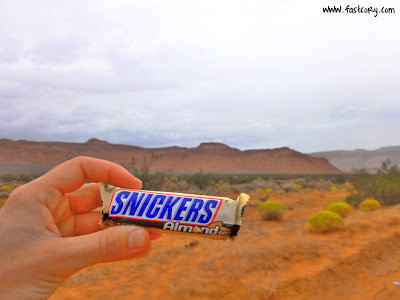 I also didn't drink much because I was nervous that I would run out of water. After I ate the Snickers my stomach tied up in knots but thankfully eased up after I walked a few miles.

At around mile 21 the skies opened up and the rain started pouring. Within minutes I was soaked to the bone and freezing cold. Those were a long couple hours sliding around in the mud before getting back to my car. When I got back to my car I had run 27 miles. I was frozen and desperately wanted to be done. But even more than that I wanted to accomplish my goal of 30 miles. So I kept running. I'm glad I didn't give up.

Thursday, October 6th 2011: 10 miles @ 10:53 minutes per mile pace. I ran crazy early in the morning so I could be home in time to get the kids ready for school. It was cold enough that I could see my breath. It feels like we went right from summer to winter.

I decided I wanted to take a rest day Friday, so on Thursday night I did 4 miles slow and easy. Here is proof of how cold and miserable it has been the last few days: I RAN ON THE TREADMILL. Doing 4 miles on Satan's Sidewalk was so boring that I almost started crying. For much of the run I practiced fast walking since I'll be doing plenty of that during the ultra. Even watching a baseball playoff game didn't make the treadmill any more enjoyable.

Saturday, October 8th 2011: 13 miles @ 12:12 minutes per mile. I ran around the Red Cliffs Desert Reserve and left really early while it was still dark. It was cold and windy and I didn't get into a groove until the sun came up: 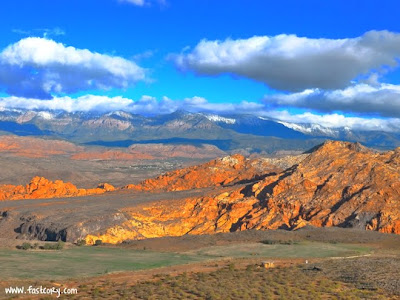 This week I got good training for the upcoming ultramarathon by running on tired legs. I figured out that starting last Saturday, during a six-day stretch (which includes two rest days) I ran 75 miles. That is the most miles I've ever done in one week. Not a single one of those miles was fast, but I'm thankful my body seems to be holding up well.

Do you like running in the rain?
Normally I love it, except on trails when it gets muddy.

Is the treadmill the most evil invention ever?
Why, yes. Yes it is.
Posted by Cory Reese at 6:37 AM