Dear Right Knee: Hey, how's it going? Did you watch Hoarders last night? Yea, me neither. Who wants to watch a bunch of people living with cockroaches? So I have this awesome idea. Let's be friends again! You can stop feeling tight and then we can go hang out and eat some Twinkies or something.

Wednesday, February 29th 2012: 15 miles @ 12:50 minutes per mile. I ran the first 6ish miles with Mel on the Gould's Rim trail. We didn't prepare very well. When we got out of the car it was really windy and freezing cold. We both looked at each other and could see that each of us was thinking "Ugh. What have we gotten ourselves into?" We rummaged through the car and found some of the kids jackets and socks that we wrapped around us to keep warm. 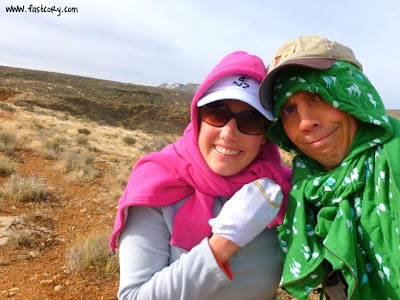 The highlight was taking Ace on his first real trail run. He was so fun to run with and thought he had died and gone to heaven. 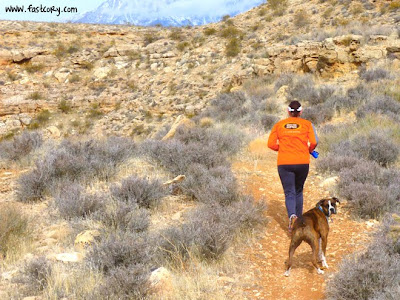 We just ran nice and slow, took plenty of walk breaks, and admired the views. This was the first time Mel had been on this trail and she said she really liked it.

I carried a hand-held bottle for him which worked perfectly. Fear not, I didn't drink out of the same bottle as my slobbery four-legged friend. 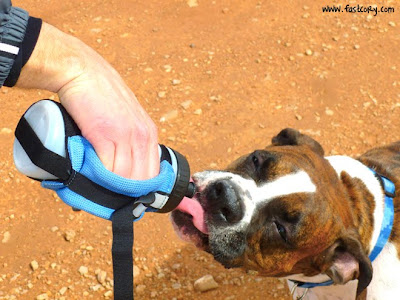 After Mel and Ace left, I finished the rest of the 15 miles by myself. I did a few out-and-backs on Gould's and the scenery is just so amazing. 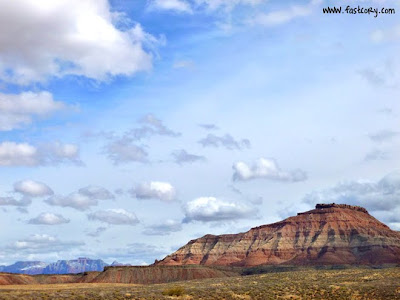 This is at around mile 90 of the Zion 100 coming up in May (or mile 40 of the 50 miler). I'm fortunate to enjoy the scenery now, because at this point during the 100 miler I probably won't be able to see the scenery through my tears. 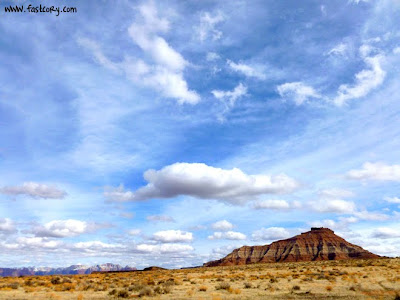 Have you seen that movie called The Horse Whisperer where a guy has an amazing connection with horses? Yea, me neither. But I have good news: Columbia Motion Pictures has contacted me to star in a new movie called The Cow Whisperer.

I came across a herd of cattle and spent a few minutes wandering around the crowd taking pictures. I walked slowly and they didn't run away. I was one with the cows. (Notice the failed snot rocket. Don't worry buddy, happens to the best of us.) 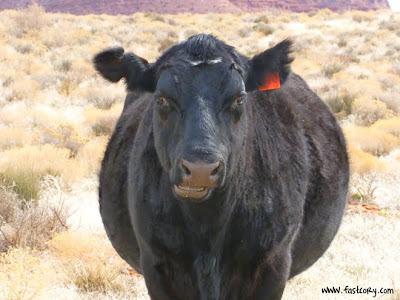 I figured out that my total mileage for the month included 154 miles on trails and only 35 miles on the road. If you don't mind, I'm going to use this to justify my turtle-esque pace.

Saturday, March 3rd 2012: 12 miles @ 11:34 minutes per mile. I did this run on the road. My knee felt a little tight for the first four miles and then something crazy happened. It's like I got a knee transplant in the middle of my run. I didn't notice any soreness or tightness and my knee actually felt normal! I tried using a dual action Cho-Pat strap, maybe that's what helped.

Dear Right Knee: I forgive you for your temper tantrum after the 30 miler last week. I will take better care of you. Lets be BFFs.

That night I did 4 more miles @ 10:46 minutes per mile. I got chased by a little chihuahua. Good times.

Guess where we'll be in one week from today.....The Virgin Islands! We've been planning this trip with a few friends for two years now. Bring on the jet lag, sunburns, and food poisoning!

Do you still go running when you're on vacation?
Probably won't run a ton but we're definitely packing the running shoes.

Any experience using knee straps?
I don't think it will be a long-term thing, just going to let the ol' knee get back to normal.

Do you watch Hoarders or The Horse Whisperer?
No, and no. Although I have seen Hoarders before. It is kind of entertaining and highly disturbing at the same time.
Posted by Cory Reese at 7:11 AM

Email ThisBlogThis!Share to TwitterShare to FacebookShare to Pinterest
Labels: http://www.blogger.com/img/blank.gif