On Saturday morning I found myself surrounded by scenery that took my breath away (unless that was the altitude). I was running Moab's Alpine To Slickrock 50 miler, and didn't realize at the time that my day wouldn't have a very happy ending. 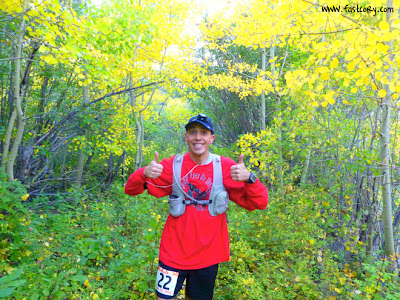 We met at the Slickrock Trail bright and early in the morning to take shuttles to the starting line. Moab is one of the most amazing places in the world.....even in the dark. 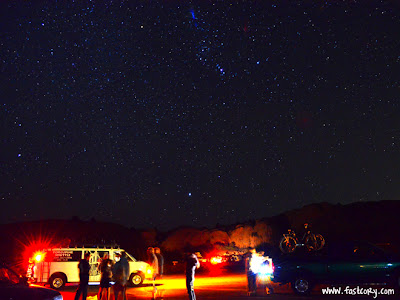 It was chilly at 5:30am as we waited for the race to start. I stood at the starting line with 30 other runners nervous and anxious. We all pushed to the back of the pack. Nobody wanted to take the lead. 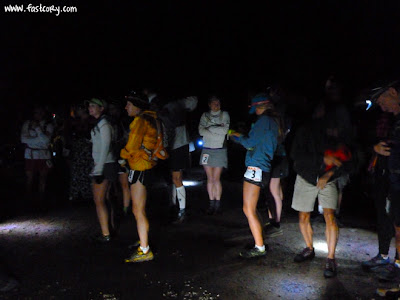 Within three miles the excitement had started. We were climbing up the first of what would be many huge mountains. And then we saw runners heading back down. Some course markings got sabotaged so the trail we were on came to a dead end. As a group we held a tribal council (we didn't vote anyone off the island) and decided to follow the ribbons showing the wrong way to go. (The Wrong Way ribbons ended up being the right way.) We only got a few bonus miles. 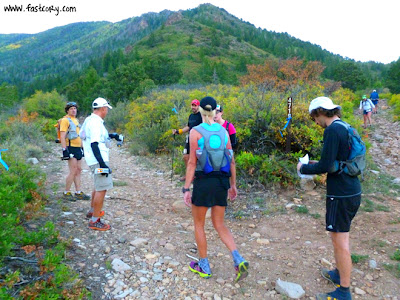 A quote from the race website says this is "an ultra that will leave even the most seasoned runner wishing he had trained harder!" (Note to self: they weren't lying.) 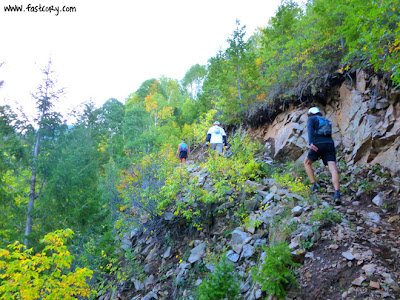 One area I loved was a long stretch of rocks just begging to twist an ankle, but well worth the risk to enjoy the scenery. 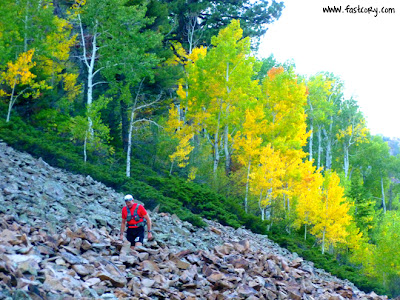 Not surprisingly, the pace around these parts was not too speedy. 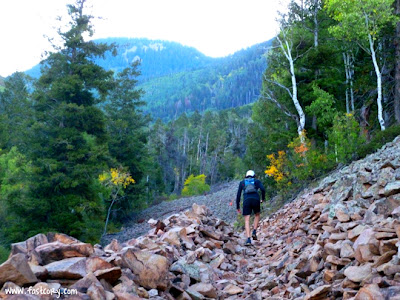 One of the things I enjoyed most was being able to run the whole time with my friend Jared Thorley. Jared is optimistic, funny, and can tackle steep, technical downhills like a bushy haired mountain goat. 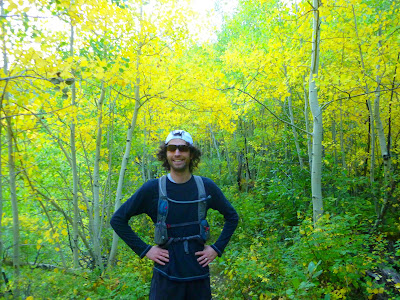 The timing of Moab's Alpine to Slickrock (MAS 50) could not have been better. The aspen leaves were changing and the hills looked like they were on fire. 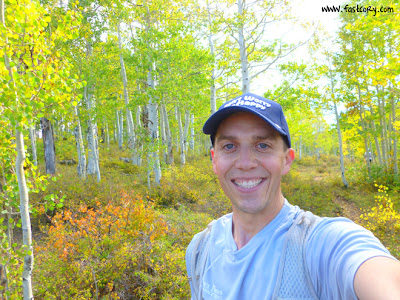 We knew the first half of the race would be grueling so we planned to be conservative and save our legs for the second half. We kept a steady pace, but with the relentless steep climbing, the energy slowly seeped out of our legs and was replaced with cement. 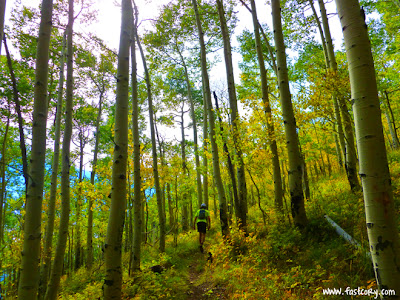 After seven or eight hours my stomach wasn't feeling tremendously awesome. With each Gu packet I ate, I was sure it would bring on barf. I was also a tad concerned about my heart rate. My heart had been pounding the whole time. It was that heart pounding that you can feel in your head. Jared mentioned that he was feeling the same. All the while, the scenery was nothing less than spectacular. 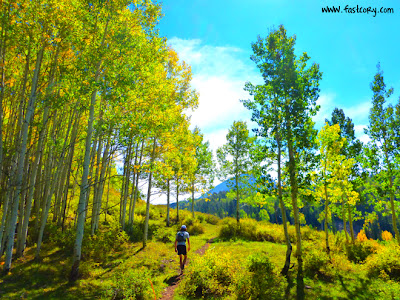 The mountains were intense. In the first thirty one miles of the course we climbed 14,778 feet! To put this in perspective, the Javelina Jundred climbs 5,200 feet over one hundred miles. This race climbs 14,778 feet in thirty one miles! 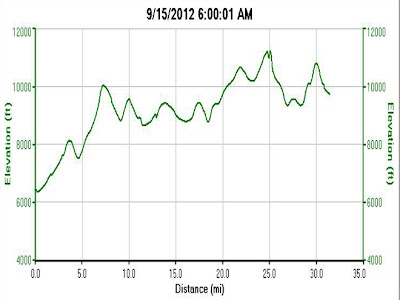 Despite stomachs not feeling good, hearts pounding in our heads, and legs full of cement, I noticed that there was never any complaining. Only optimism and gratitude to be where we were in that moment. 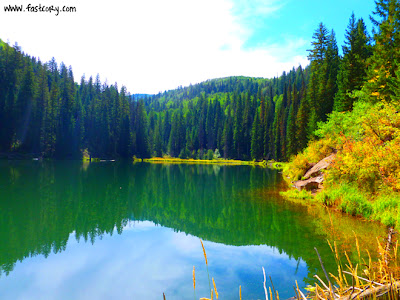 Along with plenty of steep uphills, we also had our share of steep downhills. At one point my foot caught a rock and I ended up pretending to be Superman flying through the air. Except my landing was much less graceful and resulted in a mouth full of dirt (plus a great view looking up). 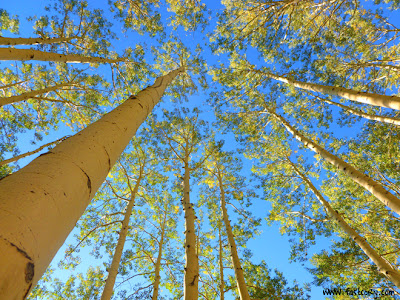 Our climb from mile 28 to 30 ended up being the nail in the coffin. We climbed almost 1,500 feet and one of those miles took 46 minutes. Nope. Not a typo. We had a 46 minute mile which included sitting on the side of the trail after realizing that we couldn't make the cut-off. It was discouraging to realize that today would be my first ever Did Not Finish. 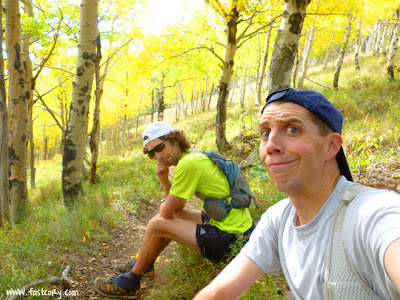 We finally reached the aid station after 11 hours and 31 miles at 5:00pm. We had exactly 30 minutes to be at the next aid station around 9 miles away or else we would miss the deadline and be pulled from the course. Our day was done. Then we had the dreaded drive of shame to get back to the finish line. 16 runners made it to the finish line.

Moab's Alpine to Slickrock was every bit as grueling and epic as it is billed to be. The course will put you through the meat grinder and make you thankful that you bought life insurance. And the aid station workers will be incredible. And the course will be very well marked. And you will be surrounded by some of the most amazing scenery your peepers may ever see.

And what about that DNF I have next to my name? Well, that sucks. I hate those three dumb letters. But I'm at peace knowing I gave 100% and did the very best I could. It's humbling to know that sometimes your 100% won't get you exactly where you hoped. Sometimes everything doesn't go according to script. Sometimes you will fly through the air like Superman, and end up chewing dirt while you stare at the sky. Sometimes life will remind you that the journey is more important than the destination. And what an awesome journey it was!
Posted by Cory Reese at 7:51 AM