Last week was the first time I have ever run 100 miles in a seven day stretch (not counting races), going from the past Thursday to Wednesday.

I would have never, ever believed that this was possible. I feel so thankful for the body my Heavenly Father has given me. The breakdown from the past week was:

The 15 miler on Monday was spent running the Guacamole Trail, a new section of the Zion 100. This is a highly beautiful but very challenging area to run in. There are very few short spots that are smooth and runnable.

Very few short spots that are smooth and runnable and jumpable. 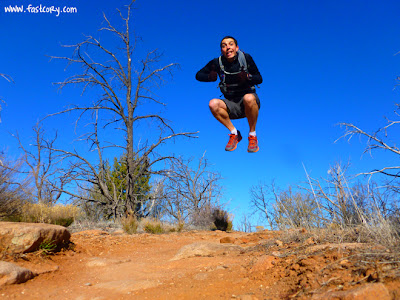 Most of the trail is very technical with lots of rolling slick rock. It's easy to lose the trail and hard to get into a groove.

The scenery up here is awesome. You just have to let your pride down a little on this section because pace will undoubtedly be slower. (Especially if you set the camera down a few times with the self timer.)

The 33 miler later in the week was, in a word, miserable. Not because of the distance, but because of that miserable Winter Storm Warning. I ran around Gould's Rim, starting the run at 5:00am which gave me a few hours running in the dark. It was so cold and windy. These white dots aren't stars....they are snow flakes. 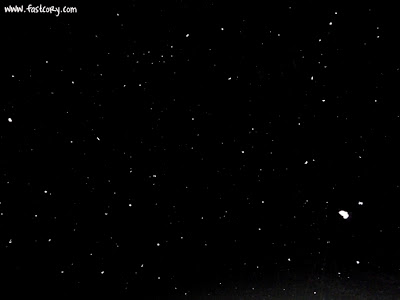 I was soaked and frozen solid. On a scale of 1 to 10, the amount of fun I was having was -48. I would have rather eaten a hair sandwich. As it started to get lighter outside, the snow started falling even harder.

I am praying to the running gods that it doesn't snow like this during the 100 miler next month, which is certainly a possibility. I was even desperate enough during this run to break out the bank robber mask. I've only had to do this one other time. Ugh.

I ran up there for around four hours before driving back home to a lower elevation and finishing the run on the road.

When I got home I added up how many miles I had run over the last week and realized I was at 95 so I did five more miles on the dreadmill that night. I feel so thankful that I was able to get this high before the Buffalo Run in March. I feel like the people in this awesome video about Thanksgiving.
Saturday's 22 miler was an group training run for the Zion 100. I'll give you that run down in the next day or two. Run on my friends!
Posted by Cory Reese at 8:01 AM