Stranded On The Trail

I had a bit of a cut back week with 52 miles, and am so, so thankful that I continue to feel good. I'm feeling more and more prepared for the Buffalo 100 coming up next month. The breakdown:

The 24 miler was certainly the most eventful run of the week. I started on the Prospector Trail in the Red Cliffs Desert Reserve. The first hour or so was in the dark. It was beautiful to watch the sun come up and make the red mountains glow:

I was thankful when the sun came up because wowzers, it was brisk outside. 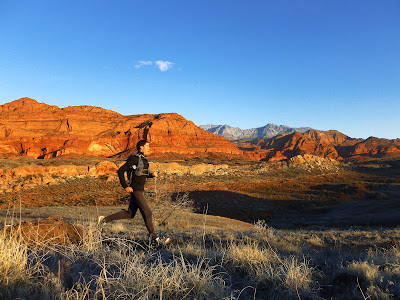 The Prospector Trail connects to Church Rocks Trail. This is one of my favorites in the Reserve. Morning light isn't the best for this spot. In the evenings this place really lights up.

This was my first run with my newest pair of Hoka Stinson Evo shoes. Muy bueno.

On the side of the trail is this little arch. With a little crunching down you can get Church Rocks in the background.

I finished up with more miles on Prospector. It was a perfect day. (Until the wind kicked up.)

In the last hour it became INSANELY windy. Weatherbug said 55+ mph wind. Tumble weeds were flying everywhere. It would have been really funny to watch if I hadn't been running out there. It looked like it was horizontally raining tumble weeds. They were just flying out of the ground like a tumble weed apocalypse.

I got back to my car to leave and realized I had a huge problem. To get to the trail head you have to drive a narrow half mile dirt road. Well, this road was completely covered in 3-4 feet of tumble weeds. The entire road! I panicked. I knew the bag of peanuts and the last few Swedish Fish in my pocket wouldn't get me through a whole week before I could be rescued. Here is a picture of the road. That little dot on the horizon is an underpass, only about half the distance I needed to travel.

I spent about an hour in those 55 mph winds trying to remove tumble weeds. Spoiler alert: That worked about 0%. I called my wife to ask what she thought I should do. Mel became the hero of the day by coming to rescue me. She drove an SUV to clear a path for me and I was able to escape. Definitely one of the crazier things I've ever seen.
Posted by Cory Reese at 7:33 AM