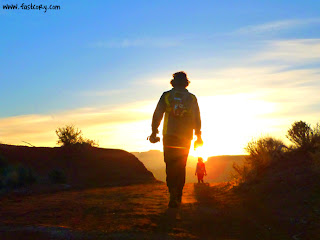 I ran my fourth 100 miler over the weekend, the amazing Zion 100. I would like to present some awards for the race:

And the award for Feet Most Closely Resembling Bruised, Blistered Vienna Sausages Goes To....myself. (I actually got lucky, I saw feet in way worse condition than mine.) I'll take you back to the beginning, when my feet were looking less Vienna Sausage-ish. 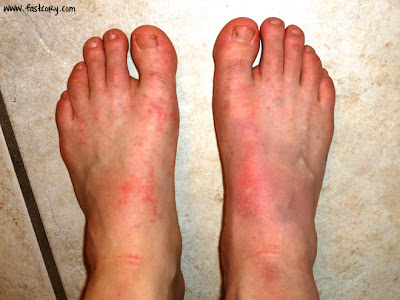 And the award for the Top Thing I Don't Want To Do at 3:00am goes to......waking up! I decided to take the early start option because I didn't want to be flirting with cutoffs. After a few hours of running in the dark I saw my first sunrise of the race. I ran every one of those miles with my friends Shacky and Vanessa who also took the early start. Here they are in that first awesome sunrise (one of my favorite pictures of the race): 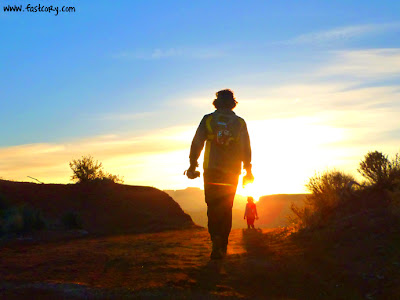 And the award for the Top Thing That Makes Me Insanely Jealous Of Someone goes to.......big, scruffy beards! This is Vanessa, Shacky, and our other running partner - Shacky's beard. I want one of those when I grow up. We kept a steady pace the whole time and I was having a blast running with these guys. 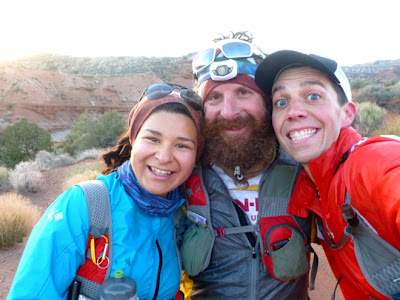 And the award for Most Likely To Make You Cry Like A Little Girl And Start Sucking Your Thumb goes to.......the trail to the top of Gooseberry Mesa! We reached this mountain around mile 18. It climbs around 1,200 feet in less than a mile. It is vertical. It is agony. For some perspective, this arrow is pointing to someone down below. 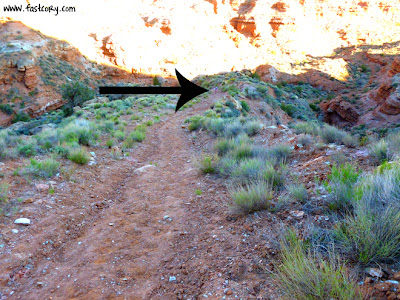 And the award for Most Likely To Almost Make You Forget That You're Curled Up In Fetal Position On The Side Of The Trail goes to.......the view halfway up Gooseberry Mesa. The views are breathtaking. Errrr, wait. That crazy steep trail was breathtaking. 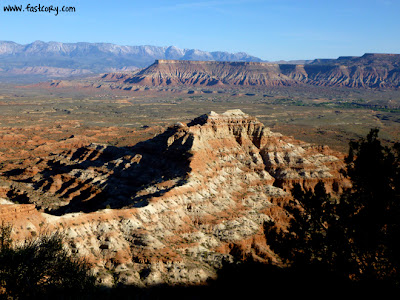 And the award for Most Likely To Fake A Smile While His Lungs Are On Fire After Reaching The Top Of Gooseberry Mesa goes to........Cory Reese! This is around mile 20. 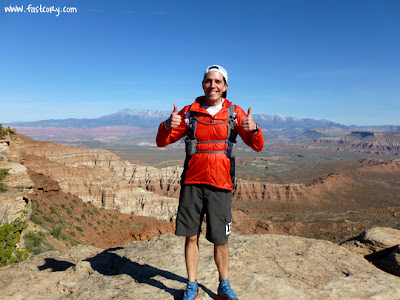 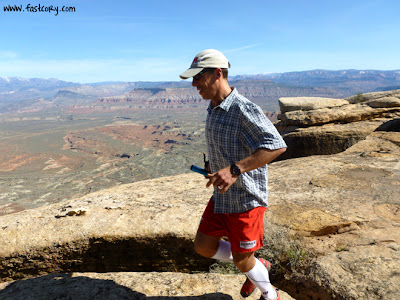 And the award for Best View Ever - And I Mean Ever goes to......The Point on Gooseberry Mesa. Although your legs definitely need to pay their dues to get here, the views are beyond description. This course is my backyard. I am blessed to be able to train here. It made me feel so happy to be sharing this awesomeness with so many other runners. 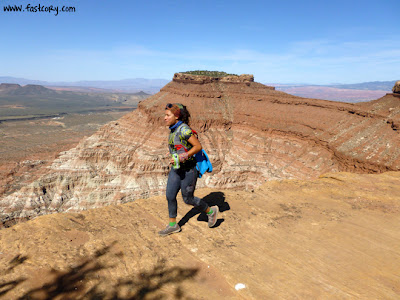 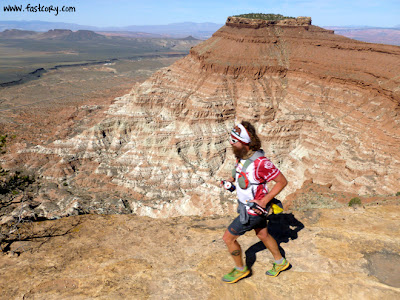 And the award for Most Likely To Suck Out Your Life, Soul, and Will To Live goes to.......the next 12 miles on Gooseberry Mesa. The rolling, jagged slickrock just shreds your legs. You ask anyone who ran this race and they'll tell you the miles up here were some of the hardest they've ever run. 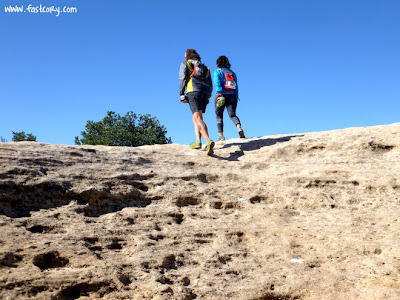 And the award for Best Wife Ever Who Has Already Earned A Ticket Into Heaven goes to........my wife, also known as Mel. She was my crew chief and came to give moral support and supplies at most aid stations. I was beyond happy to see her at mile 31. I am so thankful for her. I love her more than cinnamon rolls, naps, and Slurpees. COMBINED!

And the award for Most Encouraging Person Wearing A Pink Shirt At Mile 35 goes to.......Jill! After 33 miles Vanessa and Shacky weren't feeling so hot. (Those miles on Gooseberry destroyed their legs and they made the wise decision to drop at mile 52 to avoid injury.) So after 33 miles I headed out on my own. At mile 35 I came across my friend Jill, the world famous blogger at http://runwithjill.blogspot.com/ who gave me a needed boost to get to the next aid station. The value of seeing a familiar face can't be overstated. 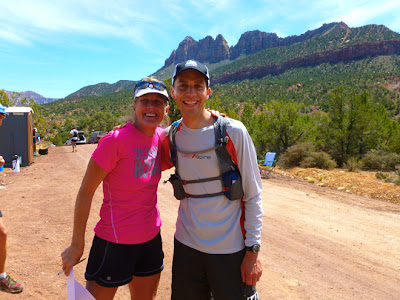 And the award for BSE (Best Sister Ever) goes to........Rudy from the Cosby Show. Man. That girl is funny! The other BSE is my sister Hollie who paced me from miles 41 to 61. I had been feeling pretty good up to this point but I could feel the engine starting to slow down. She kept me going. 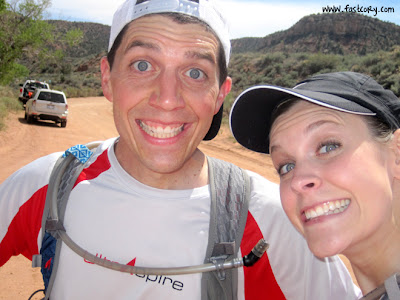 And the award for Most Likely To Make Your Stomach Revolt goes to......the climb up Grafton Mesa. I think I got a little behind on calories and fluid and felt so yucky. This was my first big wall of the race. I was pretty sure I was going to throw up. I was completely drained of energy. I was sore. Those are the times when you need to try to turn off your brain because your brain is yelling things like "If you already feel this crappy, how are you going to keep going for another 50 miles?!?!?" Still, you have to try to stay positive. 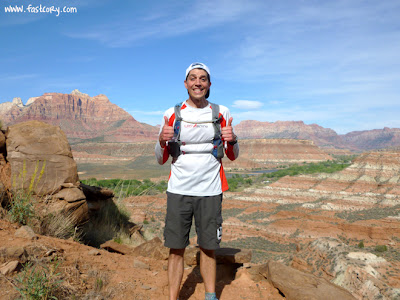 And the award for Food Most Likely To Be Found In Heaven goes to.......Nutella! I used Tailwind as my primary fuel which works awesome. I just let myself get behind. When I got to the next aid station I had three cups of Coke, two cups of goldfish crackers, two big pickles, some chips, and this little slice of awesome that will surely be available at all buffets in heaven: soft bread slathered with Nutella. After all that stuff, I was feeling much better.

And the award for Friend Who Is Questioning His Sanity After Volunteering To Pace For 20 Miles On A Difficult Trail In The Middle Of The Night goes to.......my friend Logan Murphy! Logan spent all night with me leading me through the Guacamole Trail. That section of the course is very challenging and it was freezing and the middle of the night. I'm so thankful for his help. 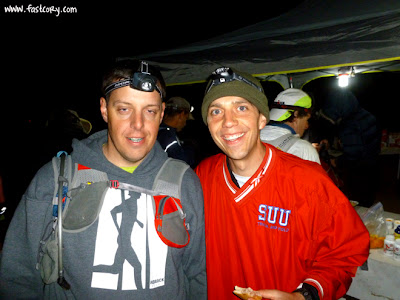 And the award for Best Deception In The History Of Running goes to........my friend Turd'l Miller and the crew at St. George Running Center who manned the aid station at the Guacamole Trail. Turd'l said "Hey Cory, do you want a cinnamon apple pancake?" Wow. That thing was seriously amazing. It was gone in three seconds flat. Then he said "How about a raspberry pancake?" My response - "Definitely! Wow, you guys have quite the food selection up here!" Then a girl walked up and whispered "You know that he's just pouring Hammer Gel on the pancake, right?" 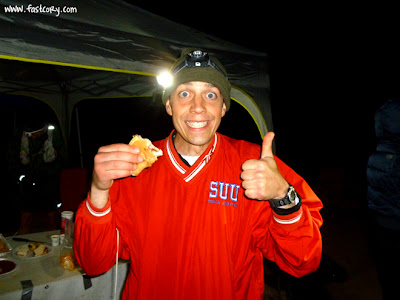 And the award for Best Crew Imaginable goes to........my crew! These guys followed my progress all over the course and got me through some dark times. I had another really low point in the middle of the night. I kept falling asleep mid-stride. I made sure to not let on that I was starting to feel discouraged. I just wanted to hurry and get to the finish line but I couldn't make my body go any faster. I still had 19 miles to go. I couldn't let these guys down. This is Mel, me, Logan, Hollie, and my mom who has also become a crewing expert after having worked the Buffalo Run last month also. 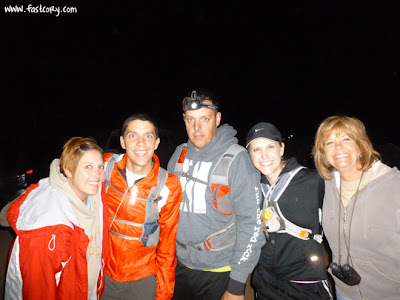 And the award for Most Thoughtful, Caring, Energetic Aid Station Ever goes to.........the Walsh's. At mile 83 I reached Whiskeytown, the aid station at the home of my friends George and Melissa Walsh. They told me at mile 10 that they had a cinnamon roll waiting at their house. I thought they were kidding. And yet when I got to mile 83 I realized they weren't kidding. Their kindness really touched me. (And that sugar rush got me through another mile or two.) This was the first time someone giving me a cinnamon roll ever got me choked up. 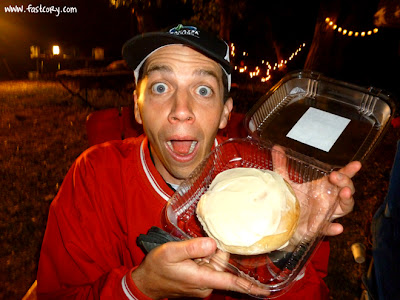 And the award for Most Likely To Have A Panic Attack On The Side Of The Trail goes to......Hollie! By this point Hollie had re-joined me for the last 18 mile push. (She ran around 38 miles total!) As I watched the second sunrise of the race (that sounds crazy) at mile 85, we were in the middle of the highly gnarly Flying Monkey Trail. We came to a point where we had to grab a rope to shimmy up a rock. She isn't a fan of heights but she survived.

And the award for Most Likely To Make Me Forget I've Run 89 Miles goes to........my boy Jackson! The crew met us at the top of Smith Mesa, the last big climb of the race. My son Jackson was there too. We had a little out and back section of three miles that Jackson joined me for. Those three miles were very special. I'm glad I was able to share that time with him. And the award for Hardest 5 Miles Of The Race goes to.......the last five miles. During the Buffalo Run 100 last month I cruised the last five miles. That definitely didn't happen this time. This was the lowest of all my lows. I was at that point where my knees were shot. My feet felt like I was walking on hot coals, and I was falling asleep again. In a marathon, most people hit the wall once. During 100 miles, you hit the wall hard multiple times. This one was a doozy. I didn't know until afterward that Hollie snapped this picture. It's slightly embarrassing, but pretty accurate about how I was feeling.

And the award for One Of the Happiest Moments Of My Life goes to.......seeing my family as I neared the finish line. A few blocks from the finish line I saw my family. My kids held my hands and ran me in to the finish. I will never forget this moment. 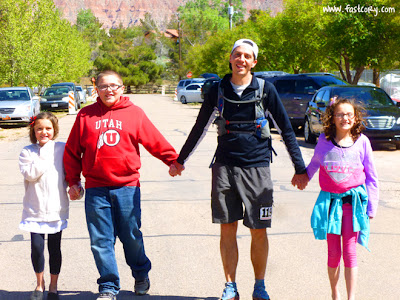 And the award for Best Thing That Has Happened In 31 Hours and 20 Minutes goes to.......reaching the finish line! I was so happy I knelt down and kissed the ground. (Note to self: it's much easier to get down than to get back up.) 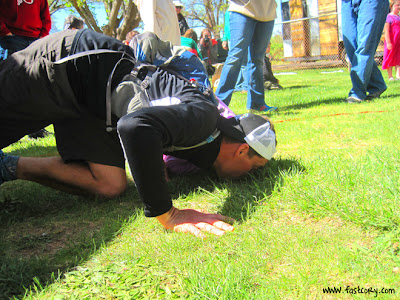 And the award for most uncoordinated jump at the finish line of a 100 miler goes to.......me. I managed to cut almost 4 hours off my time from last year, and the new course is much more difficult. I credit the faster time to simply PERFECT weather. I honestly don't know how I finished last year with temps that touched 100 degrees. Cooler weather is definitely something to jump about. 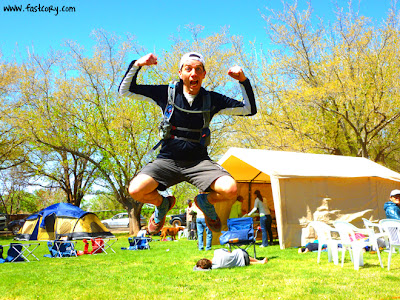 And the award for Top People Who Want Nothing More Than They Want A Bed goes to......me and my crew. I could not have made it to the finish line without each of them. They each played a critical part in the fact that I finished the race. 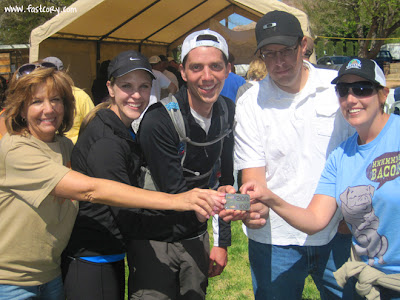 And the award for Best Ultramarathon Belt Buckle In The History Of Ultramarathons goes to........Matt Gunn and his race, the Zion 100. Each belt buckle was different and used materials from the course. I let my kids help me decide which buckle to choose. This was what we decided. 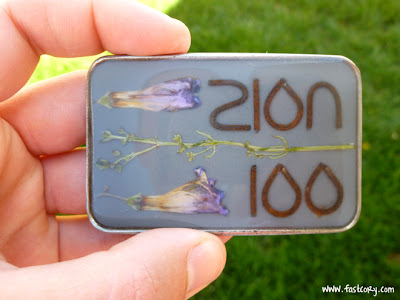 And the award for Most Difficult And Beautiful Race Cory Has Ever Run goes to........The Zion 100. There were a few kinks in last year's race with course marking. But this year the marking was flawless. The race organization was perfect. Matt has created a premier race in one of the most beautiful places in the country.

I got lots more pictures from the race which I turned into a fancy little video. You can watch the Zion 100 journey here:


"Rewards are on a level with the effort, and the effort is extreme." ~ Red Fisher
Posted by Cory Reese at 8:29 AM