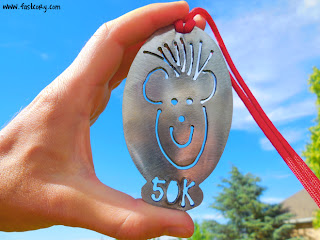 You want to know what is awesome? A race with a climb so gnarly that it is called "Widowmaker". Welcome to the Corner Canyon 50k! I ran the race on Saturday with my two friends and coworkers Clair and Catherine. Good news - none of our spouses became widows! 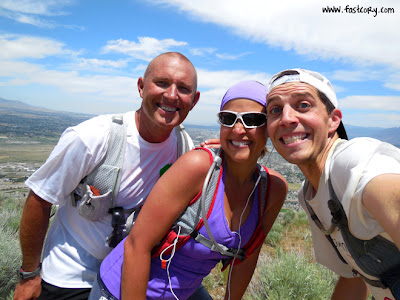 I ran the race last year and loved the great race support and beautiful, challenging course. This year some course changes made the race even more challenging. Standing at the starting line, you can see Widowmaker in the distance mocking and taunting you. Challenge accepted Mr. Widowmaker. 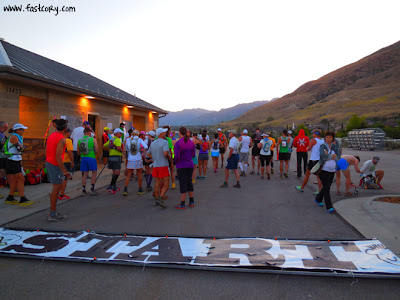 I was excited to run with Clair and Catherine who work with me. We agreed to start together but would have no hard feelings if someone was feeling good and wanted to go ahead. Catherine is a fellow social worker. 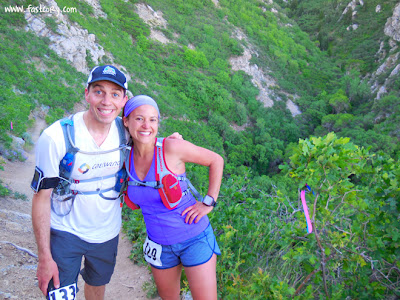 It was nice and cool in the morning though we knew we would be in for some warm weather when the sun came up. 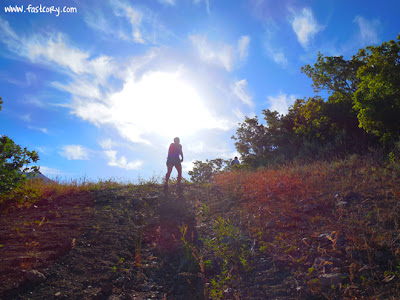 My absolute favorite part of the entire race is the beautiful miles that wind through the trees. Miles of smooth, rolling single track covered by a canopy of green. Trails don't get better than this. 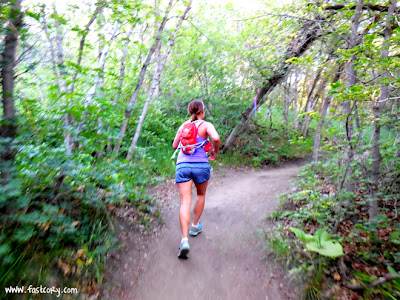 I was thankful to not be feeling any after effects from the Bryce 100 and we glided through the miles having a blast. These were the easy miles. The hard work was yet to come. 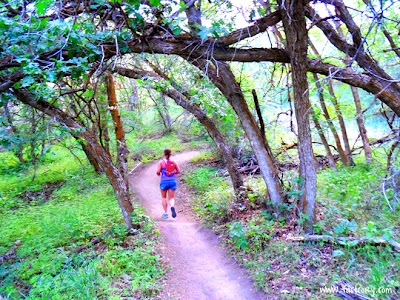 I didn't wear a Garmin so I don't know for sure, but I think it was around mile nine the climbing began. Real climbing. The kind of climbing that you will tell your grandkids about. We reached the top of one ridge and were rewarded with great views of the surrounding mountains. 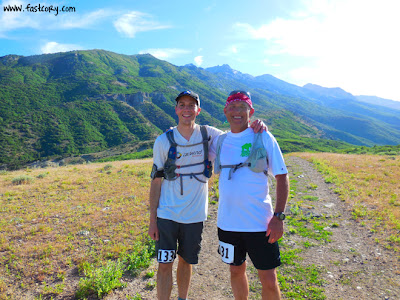 After a hefty dose of climbing we gave back all that elevation with some steep, rocky descents. I stayed in the back of the train and let Clair and Catherine determine the pace. I was so impressed with how strong and steady their running was even on technical trails. 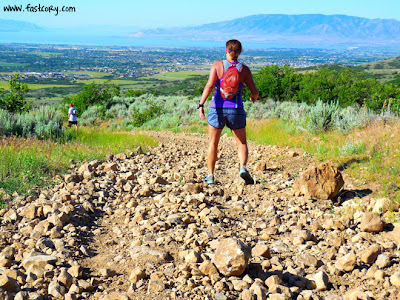 Over the last few months I have gotten used to a slow but steady 100 mile pace. This race was a great opportunity for me to go faster. I liked that feeling of pushing a little beyond what was comfortable. Eventually we reached Widowmaker - where legends are written. In all the races I've ever done, Widowmaker is the longest, steepest I've ever set foot on. 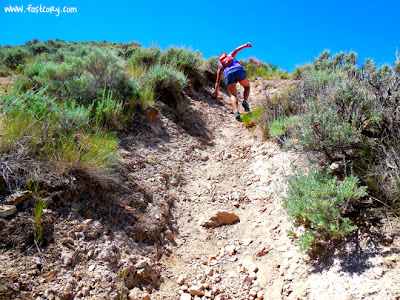 I'll bet these next two miles took us an hour. The key was to not look up and see how far there was to go. You have to try to ignore the fact that there is a chemical fire going on in your lungs while your legs are full of cement. Just. Put. One. Foot. In. Front. Of. The. Other. I was so happy to be with my friends. We seriously laughed the entire race.

And then just to keep things interesting, when we got to the top of Widowmaker we were welcomed with this little bump. Look closely and you can see little dots of runners going up. 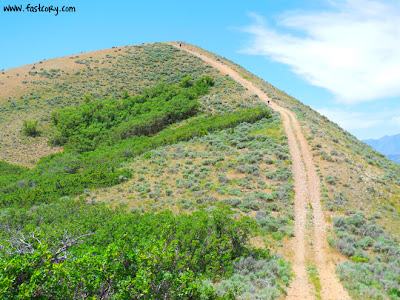 Good news - we made it to the top! No widows were made during the running of this race. 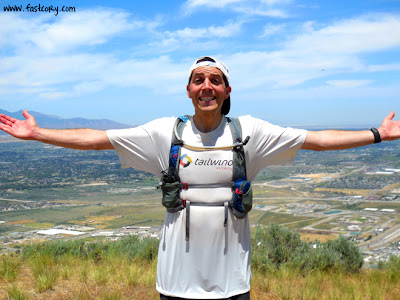 Hard work earns you big rewards. The views of the valley down below were beautiful. 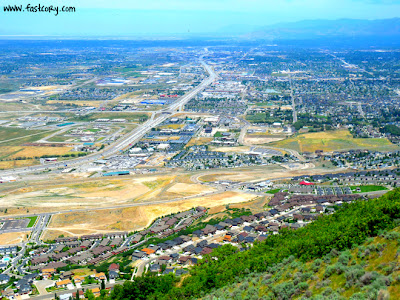 It was scorching hot as we made our way down the trail. Catherine said "If I had a pack of Ramen noodles I could put it in my hydration pack. The water is so hot that it could boil the noodles." At the next aid station the kind volunteers loaded us up with all the ice we could have asked for. 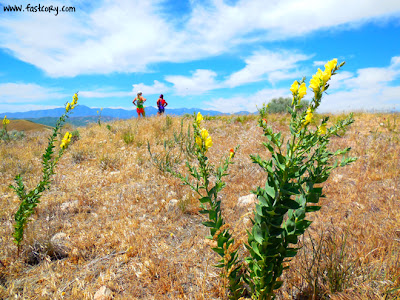 Speaking of volunteers, this race had the best of the best. They don't get any better. Each aid station was plentiful and well-stocked with anything you could hope for. The last aid station is literally the light at the end of the tunnel. 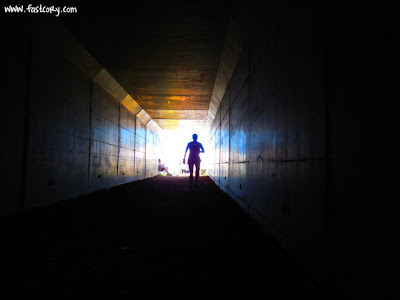 The last three miles were smooth rollers through a sea of green. 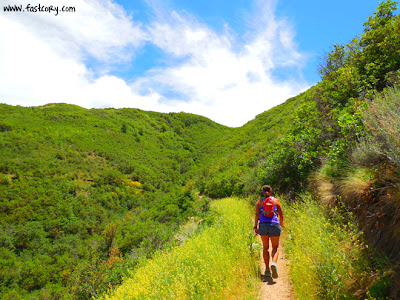 We were so excited to arrive at the finish line. And though nobody said it, I think a little part of each of us didn't want the race to be over. We had so much fun together over those 32 miles that I didn't want it to end. I caught this finish with Clair and his grandson. Priceless. 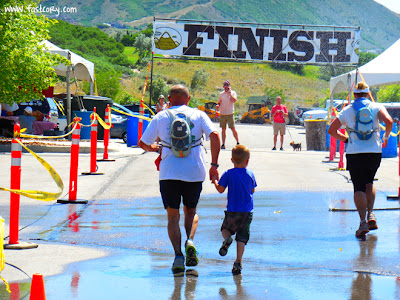 What meant so much to me was running the whole race with Clair and Catherine. We were able to help each other through our low points and have fun the entire time. I would not change a single thing about our adventure together. 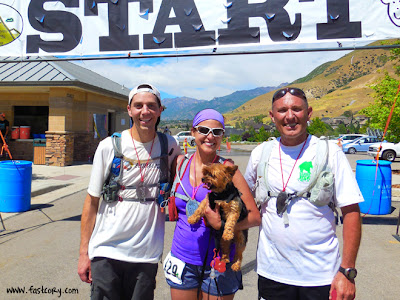 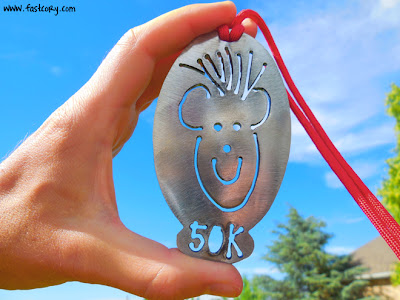