On Saturday I ran the Ultra Adventures Bryce Canyon 50 miler. In the days leading up to the race I was as nervous as a dachshund in a hot dog bun factory (thanks for the joke Jenny!). (Or as nervous as Milli Vanilli before an acoustic concert. You choose.) The weather forecast suggested getting your ark out of the storage unit. It was going to get messy. When the race started, the forecast of a downpour seemed accurate. 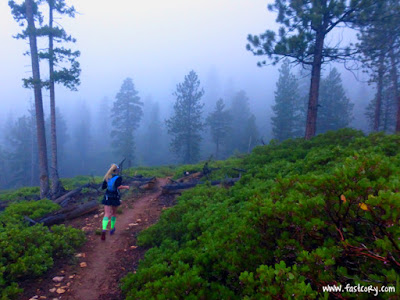 The trails were surrounded by a thick, billowy blanket of fog. It created views that I suspect few people have ever seen around here. 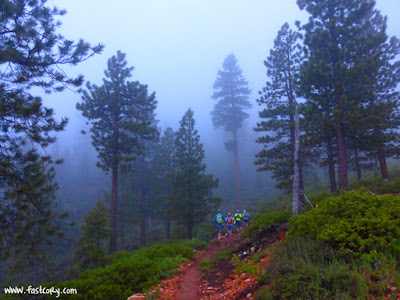 As we neared the first aid station at mile six the route got wetter and muddier. The trees and fog made it feel like I was running through a watercolor painting. 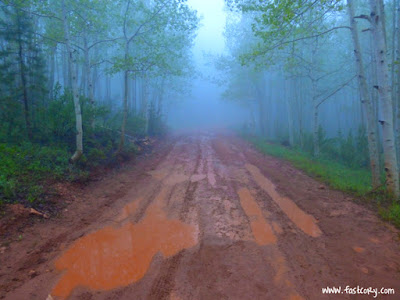 One thing I really loved was to look behind me and see the faint shadows of runners pressing through the dense fog. 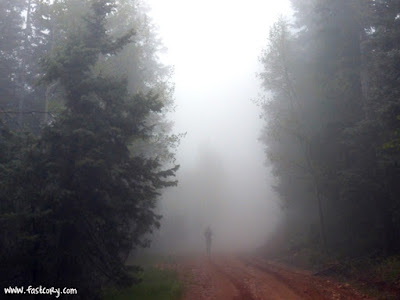 These same foggy views continued mile after mile. And then we descended a long, steep ridge taking us 1,000 feet below the summit. Almost instantly the fog lifted! The skies were clear, the views were incredible, and I was almost positive that we had passed the worst of the weather. 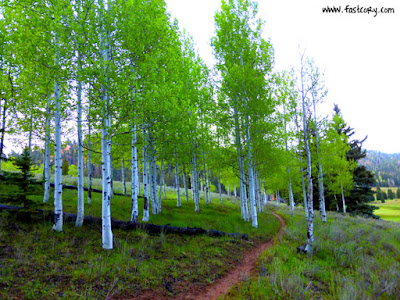 As I was going down the trail I popped a salt tablet in my mouth then started sucking on the tube of my UltrAspire pack for a drink. The Tailwind that was in my pack went down the wrong pipe and made me choke. I started coughing and that salt tablet went rocketing across the sky. In your mind's eye imagine a gun shooting a bullet. And then replace the gun with my mouth. And replace the bullet with a salt tablet. That's how the scene played out. Then more running. More RIDICULOUSLY amazing scenery like this: 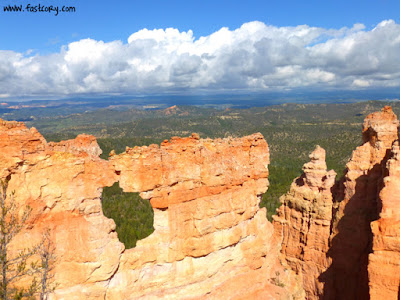 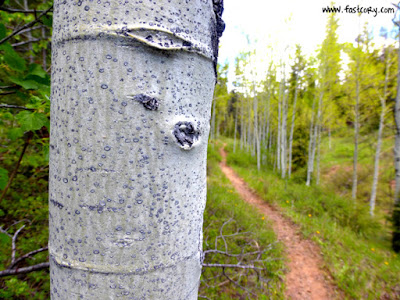 When I was around mile 25 dark clouds started to roll in. Big, dark, grumpy clouds. And then thunder started. Soon the thunder was so loud that it sounded like the sky was cracking apart. Flashes of lightning flickered around me. It was a tad scary. And by "a tad" I mean that I almost needed a clean pair of shorts. 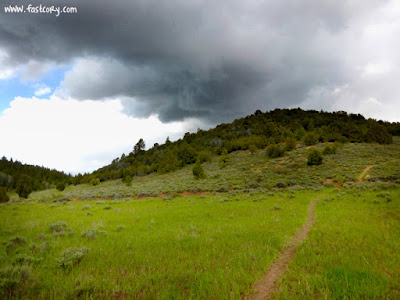 I was all alone. Then the sky opened. Waves of rain showered down. It was relentless. Then it turned to hail that felt strong enough to leave bruises. The trails were flooded. I was miles away from the next aid station. Suddenly another runner caught up to me. We ran as fast as we could. Selfishly I was thankful to have someone to run with so people would know where to find my body if I got struck by lightning. But truly it was comforting to have him there. The scene was so hideous that all we could do was laugh.

Finally, FINALLY the clouds ran out of water and the skies cleared. But then we ran into our next obstacle in the form of a mud wrestling match with Mother Earth. We reached a super steep trail going down and the rain turned the trail into slick Crisco. If you lost your footing (which many people did) you slid down a steep 30 foot cliff of Crisco. Yep. Happened to me. Half of my body was completely covered in mud. It got in my underwear. (No bueno.) BUT THEN once you got to the bottom you had to climb a super steep 30 foot trail of Crisco back to the top of the ridge on the other side. I might as well have been climbing a vertical, Crisco-covered Slip And Slide. I deeply regret being covered from head to toe in mud. Because otherwise I would have taken a video of this absurdly funny scene and won $10,000 on America's Funniest Videos. Here is part of my mud-coated body: 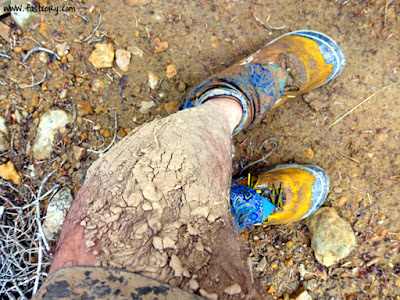 All too soon the sky got dark and started grumbling again. More lightning. Ugh. I don't want to go on anymore Crisco Slip And Slides. It was around mile 40 and I figured I better take a quick jumping picture because if the rain started, I might not get another chance. 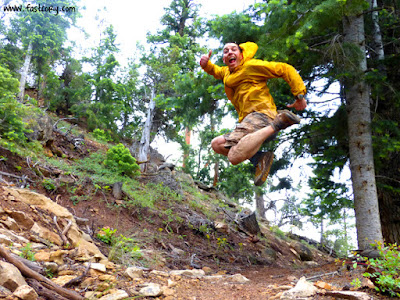 I kept running with that stranger I met in the thunder/rain/lightning/better-get-your-ark storm. I think we both felt a bond because we stuck with each other when things got really ugly. In talking with him I learned that his name was Clint Lamb and this was his first ever 50 miler. I was faster than Clint on the uphills. Clint was faster than me on the downhills. So we just stuck together. Mile. After. Mile. 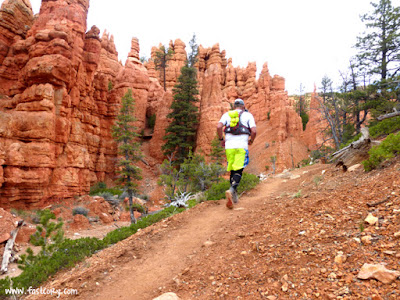 Thankfully we didn't get pounded by anymore rain. We talked about life and families and running. Clint said he had some family training to qualify for the Boston Marathon. But this race, the Bryce Canyon 50 was the big race he had been dreaming about. He was in the middle of his Boston. 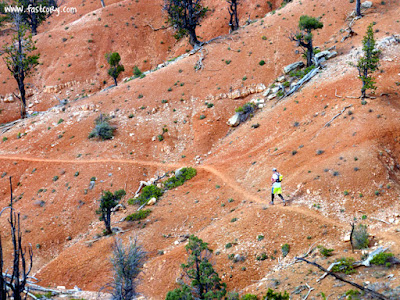 The last 10 miles of the race were undoubtedly my favorite. The views are simply indescribable. It's the kind of area I imagine God spent a little more time on so he could make it just right. 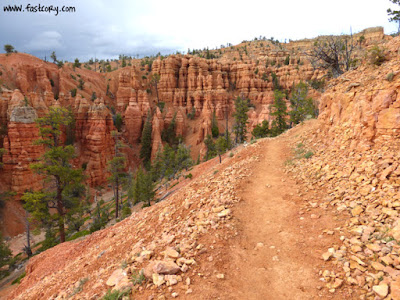 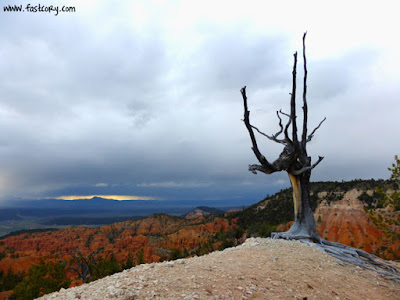 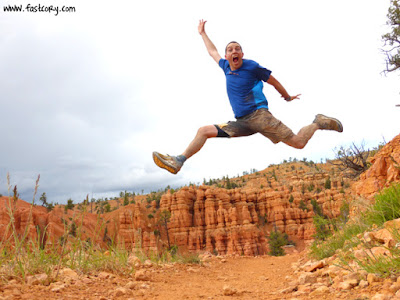 Toward the end I was definitely tired and out of gas but otherwise felt okay. I bought some 2Toms SportShield to try on my feet and it worked AMAZINGLY well to prevent blisters, even with soggy feet (Amazon link HERE). I wore two pair of socks (been doing that for the last year or so): Injinji socks covered by Feetures socks. Used the Altra Lone Peak shoes (probably my all time favorite running shoes), UltrAspire Omega pack, Tailwind Nutrition and a delicious Snickers bar for calories, the trusty St. George Running Center shirt, and a pack of Hostess cupcakes waiting for me in my car once I finished. 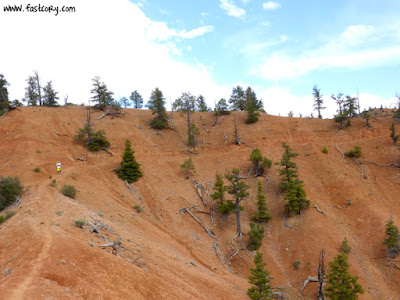 Clint and I neared the finish line. We had become good friends over the last 24 miles. Trails have a way of doing that. When you see people through the good times AND the bad times, trust and admiration grow stronger. I treasure the friendships that have been born as the result of running with so many amazing people over the years. 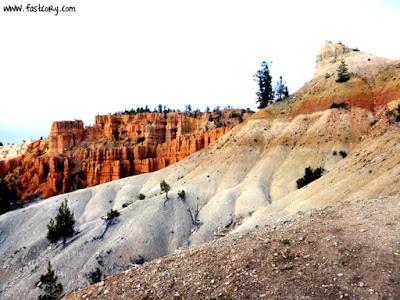 As the sun was setting on an insanely difficult and insanely beautiful day we arrived at the finish line. It was definitely the most challenging 50 miler I've run. I slowed down and told Clint to cross the finish line first. He refused. He said we had to cross together. Class act right there. 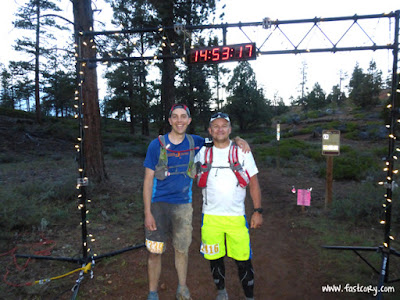 Props to Matt Gunn, Rick Whitelaw, Turd'l Miller, and the Ultra Adventures crew for putting together yet another amazing race. The scenery, the adventure.......and the Crisco Slip And Slide are things I will never forget. 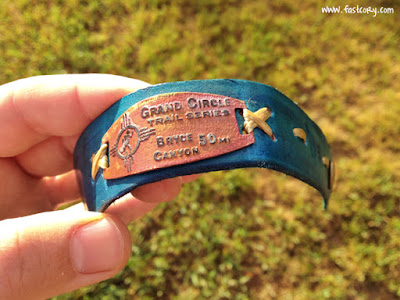