A 33 Mile Triple McDonald's Run - My Preparation For Badwater 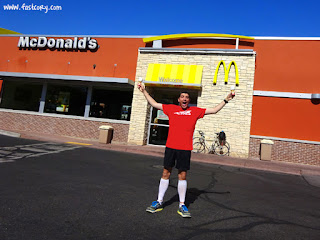 I've been working on stepping up my training to get ready for Badwater coming up next month. In case you're unfamiliar with the details, Badwater is:

1) A 135 mile run through Death Valley...in July....in less than 48 hours.
2) Described by National Geographic as "World's Toughest Footrace".
3) A prime staging ground for wild hallucinations of unicorns, leprechauns, and Oprah Winfrey pulling up beside you in the Oscar Mayer Weinermobile asking if you'd like a nice, cold cup of Sunny Delight.

Only 100 runners are selected after a rigorous application and resume process so I'm not taking this lightly. I'm hoping my training will leave me prepared to tackle the hardest race of my life on July 18th.

To prepare, I've been running in the heat of the day when possible. When I run near the Virgin River, I get a guaranteed speed workout as I try to outrun swarms of vampire, flesh-eating deer flies.

A week or so ago I planned to run from the Hurricane, Utah McDonald's to the Washington McDonald's, then back, of course stopping each time for an ice cream cone. 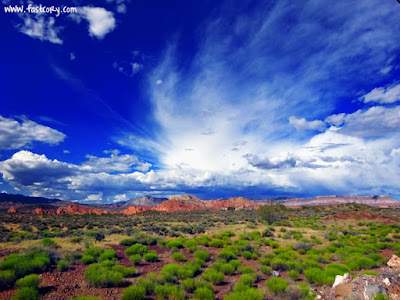 The entire route was 33 miles. After the first McDonald's I began a long, steady climb out of the Hurricane Valley. Despite the heat, I was feeling pretty good. 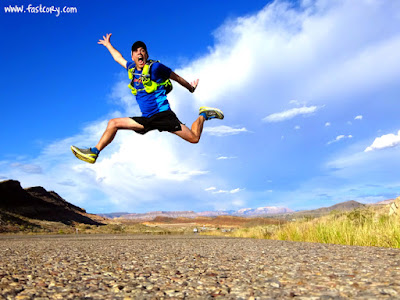 Unfortunately, when I arrived in Washington, Utah many hours later, I walked into the second McDonald's and realized that I lost my debit card somewhere along the way. I almost started crying. (No worries, I would have just blamed it on sunscreen in my eyes.) I ran the 16.5 miles home in calorie-deprived sadness. 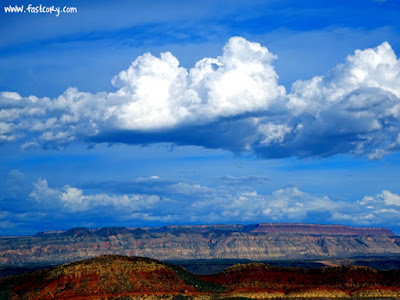 A few days ago I upped the ante and ran on a hotter day. I left work in the evening and started my run at the St. George, Utah McDonald's with a celebratory double-handed ice cream cone pose. 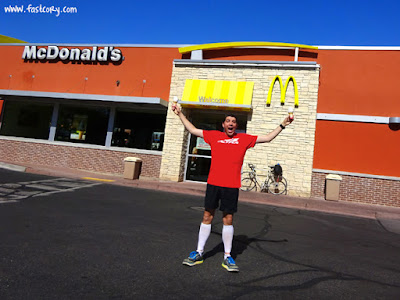 It was 93 degrees when I started running. On one hand, that seems pretty warm. But on the other hand, that is nowhere NEAR the 8,000,000 degree temps we'll face at Death Valley. On her way home from work Mel stopped to say hello and gave me a loooong hit off her Dr. Pepper. 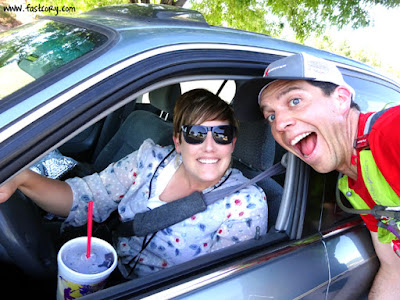 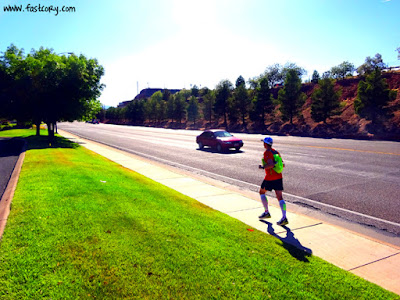 It didn't take long before I arrived at the Washington McDonald's. I went inside for a few minutes to get another ice cream cone and a Spicy McChicken Sandwich. Now this isn't going to come as a gigantic shock to most of you, but a mid-run Spicy McChicken Sandwich is just about the worst idea in the history of mankind. My stomach had 0% appreciation for my kind gesture. 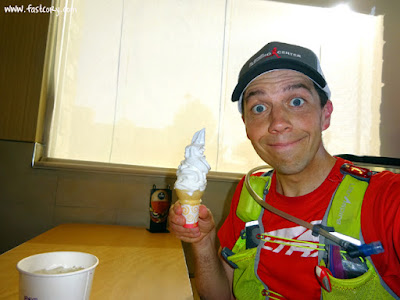 A few years ago I ran a solo 100 miler across the Salt Lake Valley just using gas stations as my aid stations to refill calories and fluid. I planned to do the same thing for this 33 mile run. I feel embarrassed about the way I abused my stomach on this run. I don't normally eat like this, and I assure you that I paid a price for it, but my gas station stop included a donut and a Mountain Dew. 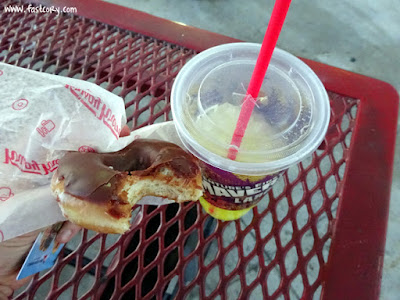 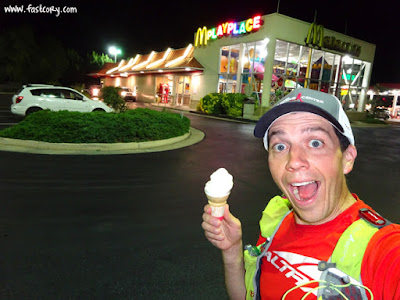 When I made it back to the gas station, the same worker was there. He said "So you made it all the way to Hurricane and back? I bet that really humbled you." I refrained from telling him that I've run a handful of 100 milers in the past, so in the big picture, this run wasn't all that bad. I just nodded and said "Yeah, it humbled me for sure." I wasn't lying. I had indeed been humbled by the Spicy McChicken brick that was sitting in my stomach.

Yesterday I did my hottest run of the year - 20 miles in 100 degree heat. I think my body is starting to become acclimated to the heat, so with patience and focus, I was able to manage the temps fairly well. I guess you wouldn't exactly be able to guess that this was the case considering that my face looked like a ripe tomato. 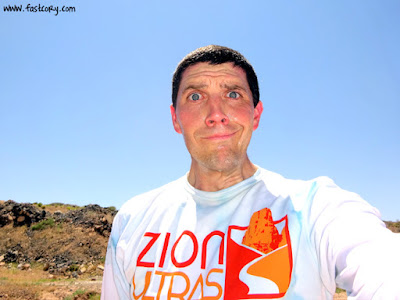 It won't be long before I'll find out if my training has left me prepared for the race. July 18th will be here before I know it. I can't wait to meet Oprah! 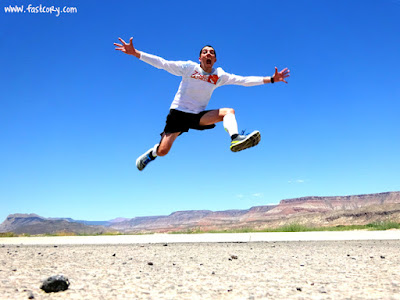