Ideally, this would have been the annual Reese Family Christmas Letter. But, like everything else in 2020, those plans went up in flames like a fire in the dumpster behind Denny’s. Then I thought, “That’s okay, I’ll just make it a ‘Happy New Year’ letter.” At least I finished it by January 21st, National Squirrel Appreciation Day. (Nope, not making that up.) Here’s a summary of our crazy year:

AUNT JACKIE and LITTLE DEBBIE
For those of you not following along, Jack is our senile poodle. Debbie is our Great Dane, and resident food thief. If you’re eating dinner and turn your head for a split second, Debbie will have your piece of pepperoni pizza in her stomach faster than you can say “Seabiscuit.”

KYLEE
Ky got her driver’s license this year, which required lots of time driving with a parent. On a related note, my blood pressure medication was increased this year. She worked at the city pool over the summer, and has been busy with school. She continues to excel with art, and made some amazing screen printing designs for tee shirts in one class. Ky got her wisdom teeth out, which led to an interesting ride home from the surgeon afterward. Through uncontrollable sobbing, she begged for a penguin and a baby koala bear. When I asked why she was crying, she said “Because baby kola bears are just so, so cute.” She recently started working at Papa Murphy’s Pizza, and now we get a family discount. #blessed A few months ago, she bought a fish, and fish tank, then snuck it up to her room hoping we wouldn’t notice. He only looks dead 60% of the time, but comes to life whenever we think it’s time to scoop him into the toilet.

DANI
Speaking of fish, Dani must have rainbow trout somewhere in her family tree. She is happiest when she is in water. On the evolutionary chart, she is dangerously close to growing gills. Over the summer, she worked at the pool as a lifeguard and taught swim lessons. As a high school Senior, she remains active on the swim team, and keeps getting faster and faster. She has also continued playing water polo, the equivalent of WWF Wrestling in water. Her team even moved up to Gold Division this year, and she received the team’s Sportsmanship Award. She loved going on a white water rafting trip. She passed the college courses she was taking in school, and completed medical coursework to earn her CNA certificate. But these things pale in comparison to her proudest achievement: sitting down to binge watch a whole season of Impractical Jokers. The show is basically like a weak attempt at Candid Camera for millennials.

JACKSON
Jackson returned home from his Mormon mission to Oregon in March. It was the time when Coronavirus was just taking off. Because of issues with his immune system, and weekly infusions, there was a collective decision that it would be best to return home after six months of service. Since then, he completed an advanced EMT course. One of the course requirements was to start 30 IVs on friends and family. To me, the idea of sticking IVs into people sounds worse than attending a Nickelback concert, but he loves it. He has volunteered at a few veterinary clinics in Shiprock, New Mexico, and Chinle, Arizona. He moved to Cedar City, and finished his first semester at Southern Utah University. He works at an assisted living facility in Cedar City, and loves to destroy me at pickle ball in his spare time. He is taking his brilliant piano playing abilities to the next level as he finishes up work on a new album of piano music.

MEL
Mel has managed to sustain her 42 year-long streak of being awesome. She continues her work as a nurse practitioner at Intermountain Healthcare. She works in a rehab facility, directly with COVID patients who aren’t sick enough to require hospitalization, but are too sick to go home. With all her protective gear, and tubes connected to a ventilation system, she looks like the 2020 version of Inspector Gadget. In February, we went to New Orleans with a big group of friends to enjoy amazing music, amazing tours, and amazing food. February feels like twelve years ago. Before putting our house up for sale, Mel did most of the work remodeling our bathrooms. The force and precision with which she used a gigantic sledge hammer was equal parts inspiring and terrifying. This year she got shingles which she gave a Yelp rating of 0/10. She also just received the COVID vaccine. Her proudest achievement was completing the Great Virtual Race Across Tennessee 1000k, running 621 miles in less than four months.

CORY
I just finished my 16th year working as a medical social worker with the University of Utah. In May I ran a solo 100 miler doing loops around the block that I called the Co-Run-A-Virus 100. This is proof that social isolation warps mental capacity and makes you do dumb things. Mel and I went to Virginia where I ran the Yeti 100, then we headed to Nashville for a few days. If someone abducted me and moved me to Tennessee, I don’t think I would try to escape. I have the Headspace app, and have tried to be more consistent doing daily meditation. This helps me manage the intense rage that gets triggered when Little Debbie steals my food. I read/listened to 77 books this year. I continue writing a monthly column for UltraRunning Magazine, and have been devoting lots of late nights and early mornings to working on a new book.

FAMILY
In January, before COVID shut everything down, we took a family vacation to Calgary, and Banff, Canada. We happened to arrive during one of the worst cold snaps in history. It was -29 degrees Fahrenheit when we arrived. I can confidently verify that absolutely nothing is enjoyable when it is -29 degrees. Then COVID hit, which was particularly concerning for our family, considering that Jackson and I both need weekly infusions for nonfunctioning immune systems. We’ve been conscientious of social distancing, but you know you’ve been cooped up too long when you realize you’re having conversations with the toaster. We also have COVID to blame for watching Tiger King. I’ve never been so tempted to grow a mullet. Our family did lots and lots of hiking together during the year. It was fun to show the kids some of the trails that we’ve been running for many years. In our most spontaneous activity of the year, we drove to Page, Arizona. The night before, we learned that illusionist and TV star David Blaine was planning to hold on to 43 weather balloons that would carry him 25,000 feet into the sky, before he would disconnect from the balloons and parachute down.

2020 welcomed in a new chapter for our family. After living in our home in Hurricane, Utah for 17 years, we moved to St. George! The move happened right before Christmas, which is why this became a Happy New Year letter. We had planned to build a house, but things kept falling through. Then we found a stunning house that was almost done being built. The house stood at the base of a towering mesa that glowed red in the sunset. The neighborhood was quiet and established. The front door was modern and stylish. And it would turn our 30 minute commute to work into a 5 minute commute. We immediately fell head over heels in love. We made an offer that night, and were ecstatic when it was accepted. So here we are in St. George, in the process of turning a house into our home.

Despite all the challenges of 2020, we still have so much to be thankful for. May the New Year bring you and your family happiness, peace, and a new season of Tiger King. Love, the Reese Family 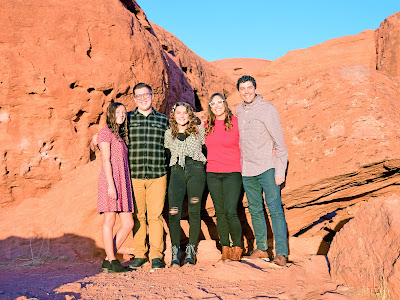