Monday, August 24th 2009: 30 minutes on exercise bike followed by throwing up for the next 20 hours. I'd like to say that the exercise bike was so boring it made me throw up. I don't think that's quite true. Close though. My stomach wasn't feeling good whether I was riding the bike or not, so I figured I might as well ride.

Tuesday, August 25th 2009: The only part of my body that got any exercise was my abdominals which got a good workout from all the throwing up. I had black eyes from the veins above my eyes bursting from all the vomiting. Click HERE to read about my partner in crime. 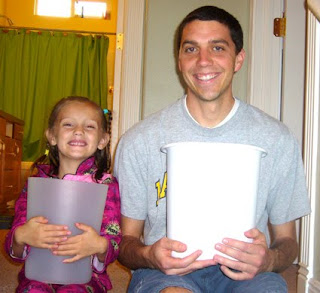 Wednesday, August 26th 2009: 2 miles in 20 minutes. I thought I was feeling a little better so I tried a few miles on the treadmill. Probably not the smartest thing I did during the week. Mel wasn't home or I would have been chastised and not allowed on the treadmill. For good reason.

Thursday, August 27th 2009: 3 miles at the track. I did a little speed workout and actually didn't feel too bad while I was running. I didn't feel so swell afterward though. Ugh. 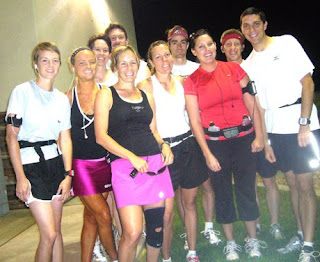 We started at the Walmart in Hurricane and headed up the enormous hill toward Coral Canyon. This is one long, steep hill but Mel and I took it slow and I was surprised how good I felt. Here's Mel before we started up the hill: 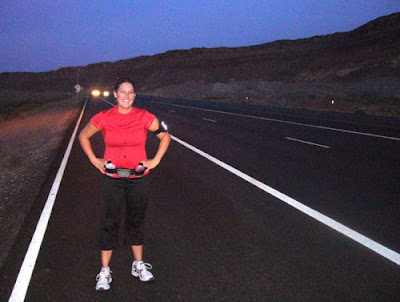 Mel planned to run 8 miles so she turned around at the 4 mile mark to head back. We were averaging 12 minute miles which felt good especially heading up the hill. I kept going a little while longer before heading back. My fastest time on the run was an 8 minute mile, and I averaged about 10:20 miles over the whole run.

My Achilles hurt much less on this run which I was so thankful for. I felt surprisingly good today. I really needed that after the long run last week when I felt so terrible. It was fun to have Mel along for the first section. Good job Mel! 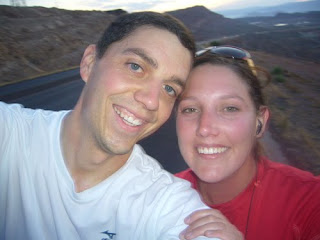 “Some seek the comfort of their therapist’s office, others head for the corner pub and dive into a pint, but I choose running as my therapy. It was the best source of renewal there was. I couldn’t recall a single time that I felt worse after a run than before. What drug could compete? As Lily Tomlin said, ‘Exercise is for people who can’t handle drugs and alcohol.’” ~ Dean Karnazes