I am beginning to feel as uncomfortable as a cow who accidentally stumbled into McDonalds. Less than 7 weeks to my first marathon. I'm nervous.

I truly don't know where I stand. I've been training for almost a year, but I don't know if I have under-trained or over-trained. I'm not sure what I should be expecting from my body at this point in the game. I read an article today about the shirts that people wear during marathons. One shirt said "This seemed like a good idea 3 months ago." I think it's a safe bet that I'll be feeling that way around mile 21.

Monday, August 10th 2009: My ankle was really hurting and I didn't think it was a good idea to run. When I was younger I told my dad I had a headache. He said "Do you want me to kick you in the knee?" I didn't see how that had anything to do with my headache and I had a puzzled look on my face. He said "If I kick you in the knee you'll stop thinking about your headache." I needed a kick in the knee.

Tuesday, August 11th 2009: The one-month anniversary of spraining my ankle. It has been throbbing all day. I'm not a fan of doctors but I was worried and set up an appointment with a sports medicine doctor, Dr. Millward for the next day. No running.

Wednesday, August 12th 2009: No running. I met with Dr. Millward who said nothing was broken but literature shows that it takes 6-9 months to completely heal the ligaments of a sprained ankle. He said as long as I'm careful I should be okay to keep running. Good answer.

The advice of most doctors would be "Are you serious? Stop running you idiot!" They don't understand runners. Dr. Millward runs so he understands the obsessive insanity of the lifestyle. His answer is always "Keep going."

Thursday, August 13th 2009: 3 miles at the track. I did a few speed laps but after 2.5 miles my ankle and Achilles were throwing a tantrum. Will someone kick my knee?

The fact that I ran 16 miles (at a 10:19 pace) is a small miracle considering how my foot felt. It convinced me that I can do anything I put my mind to. I could run for about 5 minutes before the ache would force me to walk. But then after walking for 20 or 30 seconds I could go again for another 5 minutes. Except for my foot I felt pretty good. Here's a picture along a section of the road I ran: 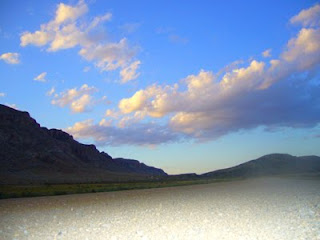 Whenever I run past about 13 or 14 miles I get insanely hot. I live in southern Utah - we know 115 degrees in the summer. But the hot I feel isn't like anything I've felt before. It feels like my innards are melting from the inside out. I am a soft, precious flower that is wilting in the barren desert. (Yea. Me. A soft, precious flower.) 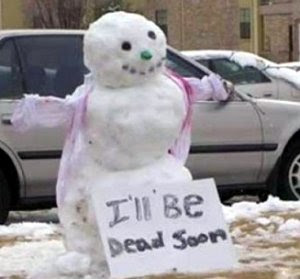 Saturday, August 15th 2009: 1 mile at Fun Run with Jackson. Mel rocked at the Washington Fair 5k race. Rocked. And Jackson ran the 1 mile run. He decided a few weeks ago he "wanted to train for the race" so he has been consistent with walking/jogging. 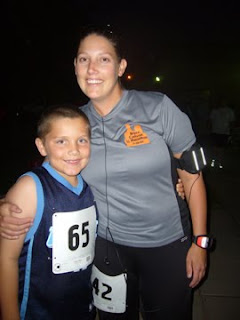 I jogged with Jackson and pushed the girls in a running stroller. Jackson won his age division and received one of these cool ceramic prizes. It was a happy moment. 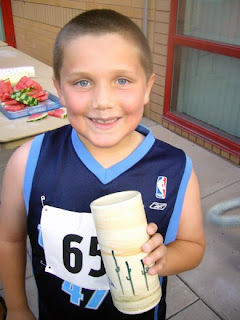