Monday, November 7th 2009: 4 miles in 37 minutes. Mel said she needed some frozen broccoli for dinner the next night. It was snowing pretty hard outside which happens nearly never so I thought I'd truly experience the weather by running to the grocery store for the broccoli. Holy Moses, it was so cold outside. I was soaked. But now I can say I've run in a blizzard. 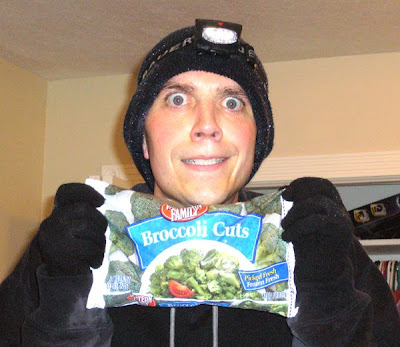 Wednesday, November 9th 2009: 2 miles in 20 minutes. It was a busy day so I only had time for 20 minutes on the treadmill. I'm thankful for the strategic placement of our treadmill right in front of the television.

Thursday, November 10th 2009: Rest. And Taco Bell. And a huge cookie from the gas station.

Friday, November 11th 2009: 11 miles in 1 hour & 52 minutes. We were supposed to get a big snow storm on Saturday so I decided to do my long run on Friday. I still managed to have a few snow flurries along the way.

I wasn't able to leave until later in the evening and didn't want to be running that far away from home in the dark. So.....I ran around the block again for 11 miles. I thought the muscle in my thigh was getting better, but it started to act up again during my run. Grrr.

Something bad happened over the last two miles. My calves got the really painful cramps / charley horses that I experienced for the first time during the St. George Marathon. It hadn't happend before the marathon, or since then. But it happened on Friday. My legs knotted up and it was impossible to run.

That was the most helpless feeling during the marathon when my legs started doing that. I so vividly remember being so close to the end that I could see the balloons at the finish line. But my legs were cramped so tight that I couldn't walk. There was a lady in the crowd next to me to had already finished the race. She yelled "You can do it! You are almost there!" But my legs wouldn't move.

I eventually managed to trudge the final stretch to the finish line. The last .2 of the 26.2 marathon was a killer. I regret that I didn't ask that lady from the crowd if she would mind carrying me to the end.

Saturday, November 12th 2009: 30 minutes on exercise bike. I helped pass the time by watching the Jazz beat the Lakers.

The Painter's Half-Marathon in St. George is coming up on January 23rd. Mel has been training for it too, but hurt her foot last week and the doctor thinks she may have a stress fracture. She has an MRI scheduled for tomorrow to check it out. I hope she gets feeling better soon enough for the race. Keep your fingers crossed!
Posted by Cory Reese at 7:25 PM