We have had an incredible year at the Reese house. Looking back at 2009, I’m surprised at how much we were able to pack into the year. Here are a few journal entries and a recap of our 2009 adventures. You’ll notice that the theme of barf pops up just a little too often. My apologies. It’s just that barf is pretty funny.

January 8, 2009
We hung out at Mel’s mom’s house for New Years Eve. The festivities and fun of the evening ended promptly when Kylee launched barf all over the floor. Then she launched again. Then as I was helping her move toward the bathroom she launched again, all over me and my leg. I felt bad for her. I don’t know what got into her.

February 10, 2009
This morning when I was getting ready for work Kylee came into my room with a church dress, tights, shoes, and a matching flower in her hair. She was so proud to tell me that she chose her clothes and combed her hair. I told her how beautiful she looked and she said “You should marry me when I get bigger.” I had a smile on my face and she said “You’ll have to buy me a white dress though.” I said okay. Then she got an excited look on her face and said “You can get it at Wal-Mart!”

March 2, 2009
In the evening Mel ran in to the living room laughing hysterically. It took a few minutes before she could say what she was laughing at. Apparently when she was tucking the girls in to bed, Danica climbed up on her bunkbed and said “What the helllllll happened to my bed? (very drawn out).

August 17, 2009
Kylee said something funny to me yesterday. We were sitting at the table eating breakfast and she said “Dad, when we go to heaven will we have to eat our food storage?” I told her I didn’t think we’d have to do that in heaven. I told her I thought there was every kind of food we could ever want and we could have as much as we wanted. Her eyes got so big and she was really excited. Then she said “Ooohhh! I want to die right now! Then I can have as many candy corns as I want!” More proof that she’s my daughter.

August 27, 2009
When I got home from work Monday evening, my stomach felt terrible and I told Mel I wouldn’t make it through the night without throwing up.

So at 9:40pm the barfing began. I threw up a ridiculous amount of vomit. I was kind of surprised my stomach had that much in it. As I was walking to the bathroom to empty my garbage can full of barf, Danica came running in from her bedroom and launched right into the garbage can before I even had a chance to empty it. It was miserable and funny at the same time. We spent the rest of the night on the couch taking turns upchucking.

In March Jackson and I went to Las Vegas to watch two Cubs spring training games. The first night we enjoyed $18 worth of nachos, popcorn, and soda at the game. I dearly regretted that decision. I was so nauseous a few hours later. I spent the rest of the night with a nasty Vegas motel garbage can on my lap begging to throw up, but to no avail. Grrrr.

In April Kylee got her tonsils out. Thank goodness for the barf basins at the surgery center. Otherwise I would have been wearing stomach acid.

Also in April, Mel and I spent a week in Washington DC with my parents and my brother’s family. We had an incredible trip. We saw the White House, Smithsonian museums, all the monuments, the Constitution and Declaration of Independence, and George Washington’s house. Over the course of that week I ate an absolutely obscene amount of Dunkin’ Donuts. God bless the USA. And Dunkin’ Donuts.

Mel and I were put in charge of Youth Conference this year and took the kids on a Pioneer Trek in July. We had an amazing experience and couldn’t think of anything we’d rather do with sweaty teenagers. Our feast on the final day was a true celebration of our rich heritage: large amounts of Little Caesar’s Pizza and countless boxes of Twinkies and Ding Dongs.

Jackson got baptized in August. We also got a phone call from the school district in August. They said that Jackson read the most books of anyone in the school over the summer. Because of this, they asked him to throw the first pitch at the St. George Roadrunners baseball game. It was a Proud Father moment. I’m hoping someone from the Cubs organization will call next.

Mel and I have taken up the hobby of running over the last year. In July we ran the Bryce Canyon Half Marathon. For those of you who haven’t experienced the pain of a marathon or half marathon, let me explain how it feels. Imagine the most painful things you can think of. For example, 1) Getting paper cuts on your eyeballs, or 2) Reading Shakespeare, or 3) Listening to Celine Dion music. Now…put them all together. Celine Dion is giving you paper cuts on your eyeballs with pages from Shakespeare while she sings the National Anthem. Now you have an idea of the torture of running a long race.

In October I ran my first marathon, the St. George Marathon. I can’t think of a logical explanation for why someone would willingly pay $75 to suffer through something like this. It’s as puzzling as why some people like Celine Dion music. Despite the pain, it was an incredible experience and I felt a huge sense of accomplishment. I plan to do it again. To read about the experience visit fastcory.blogspot.com (FYI: I have no Celine Dion music on my iPod.)

We feel so thankful for our family and all of our blessings. We sometimes have to pinch ourselves and wonder why we got so lucky. We hope your family has an awesome Christmas and New Year. And we pray that no Celine Dion CDs will end up in your stocking. Sincerely, The Reese’s 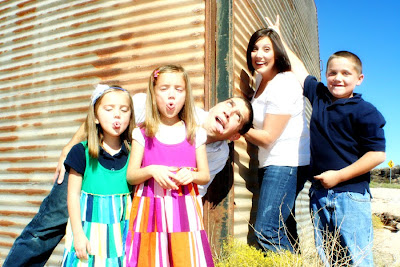