This was my 3rd half marathon and I was nervous in the days leading up to the race. Mainly because it had rained non-stop. And the weather report said it was supposed t0 be 33 degrees with snow at start time. That sounded, hmm, whats the word,......miserable.

Shortly before leaving for the race, it was still so dark, overcast, and foggy outside. This was the view out our front door. Miserable. 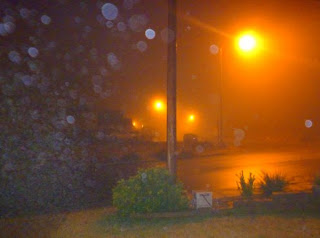 We saw some of our neighborhood running buddies at the Dixie Center before the start of the race. Everyone was packed in there to stay warm and prevent runny noses from turning into icicles. 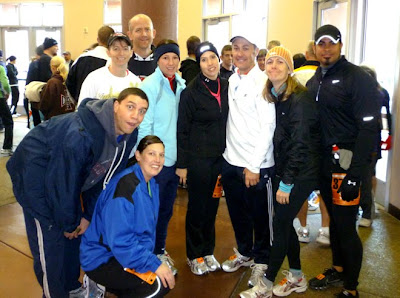 Miraculously, the weather started to clear up before the start of the race. It was still cold outside but not the bone-chilling cold that makes you wish your life would end. Actually, the weather and temperature were absolutely perfect. Perfect.

I told Mel months ago that I would run Painter's together with her. This was our first race where we ran with each other. It was fun to have someone with me the whole time. 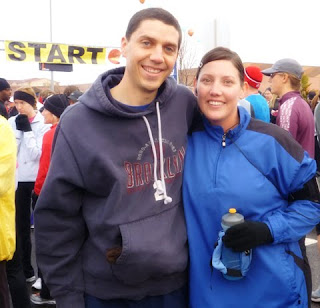 I LOVE doing races. I feel a kinship with all the other crazies who have allowed the pain and triumph of running to become part of their lives. My knees started to hurt over the last few miles and it started to feel like a buzz saw was slicing through my kneecaps. It wasn't bad enough to make me curl up in fetal position and cry like a school girl though. 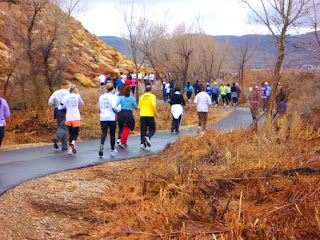 This was the hardest of the three half marathons I have done because there were lots of uphill stretches throughout the course. But the scenery was amazing. The trail winds along the Virgin River, and I had to stop to take this picture with the temple in the background. 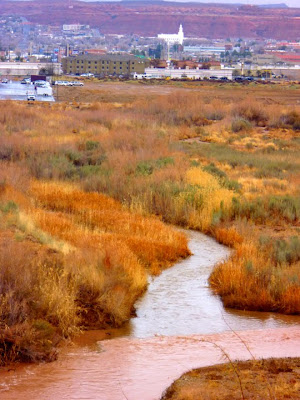 I really liked running with Mel. We did a little bit slower pace than I usually do, so it was nice to never feel out of breath or worn out. It is awesome to still feel strong at the end of the race instead of feeling like hyenas ate your muscles for dinner. 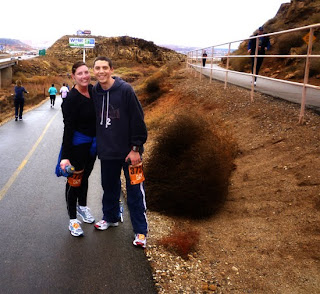 Around mile 9 we arrived at an awesome water station. In addition to drinks, they had donuts, hard candy, pretzels, and gummy bears. Awesome. Mel grabbed a handful of gummy bears. I started laughing because I remembered Kristin's marathon story. She said she got gummy bears at a race once also. But then realized that some people apply Vaseline in "nether regions" to prevent chaffing......and probably used those same hands to dig into the bowl of gummy bears. I was giggling as I told Mel this story. She promptly launched a gummy bear right out of her mouth. Good times. Good times.

We finally saw the finish line and finished strong. We averaged a 12:12/mile pace. We held hands and raised them up in the air as we crossed the finish line. I felt so thankful to have her there. I felt thankful that we had that experience together. It was an amazing, challenging, difficult, inspiring, painful, and rewarding experience. The pride and happiness you feel after accomplishing something like that is hard to describe. Moments like today make me happy to be alive. 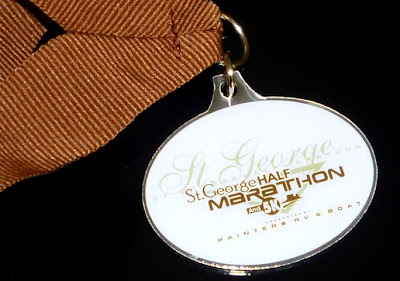