Monday, March 22nd 2010: 20 minutes on exercise bike. It was late at night before I had a chance to get on the bike. 20 minutes was all I could muster before I almost fell asleep.

Tuesday, March 23rd 2010: 3.6 miles @ 9:43 per mile pace. I woke up early to go to the track with Jackson. Too early. But I am tough. I have will-power. And we got as far as the car. It was cold. It was dark. It was windy. So I made an executive decision: cancel the workout. Unsurprisingly, I didn't find any resistance from Jackson.

That night I ended up going out late after everyone went to bed. I'm sure it was exactly zero degrees warmer. And zero percent less windy. I was thankful to get home to my warm bed.

Wednesday, March 24th 2010: 6 miles @ 10:59 per mile pace. I did a jaunt through Red Cliffs Desert Reserve. Following this, I erased every shred of healthy behavior by consuming a Big Mac combo meal from McDonalds.

Thursday, March 25th 2010: 20 minutes on exercise bike. Yet another late night. This week really tested my ability to fit exercise into a crazy life. Even if it meant making little sacrifices - like a little bit of sleep.

Friday, March 26th 2010: Rest. And shockingly little junk food. (I made up for it after my run on Saturday: Chicken Basket with Fries and a Mint Oreo Blizzard from Dairy Queen. I believe I died and went to heaven.)

Mel and I decided to run the course of the upcoming Hurricane Half Marathon on April 24th. The new route starts at Sand Hollow Reservoir. I brought my camera when I drove around to drop water bottles before the run. This is near the beautiful start of the race: 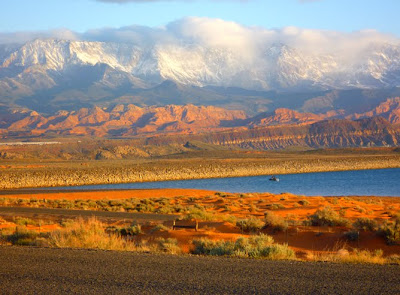 A really bad thing happened before we started running: the wind picked up. But this wasn't your average wind. This was Chuck Norris-esque wind. The kind of wind where you have to look out for low-flying trains. I really wasn't sure I could do it. But I knew I couldn't go home and do 17 miles on the treadmill. I would surely go postal. This picture was moments before the run as Mel and I sat in the car considering calling it quits: 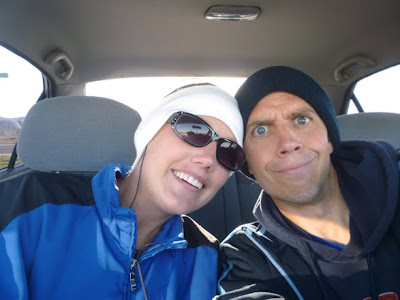 But we forged ahead. The first mile was actually easy because we were running with the wind. But then things got ugly when we turned to head into the wind. Earlier in the day I reached an area of the road where you are running between a sand dune, and the sand still blows onto the road. 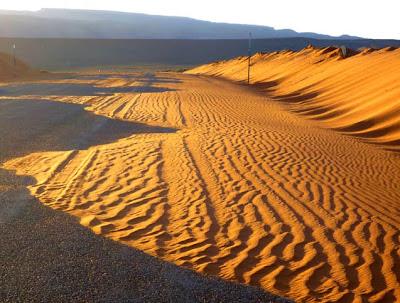 It was a different picture an hour later when we were running here. Sand was blowing so hard that you couldn't see in front of you. There was a bike race going on as well. Six or seven minutes later when we got through the sand dune we turned around to see the bikers going through the sand storm. It was a surreal thing to behold. Out of nowhere a bike would emerge from a swirling red cloud. We had sand in our eyes. Ears. Nose. Teeth. Everywhere.

Things I Learned From The Wind:
1) If you don't have sunglasses, you best be learning how to run with your eyes closed.
2) You must be acutely aware of wind direction when blowing a snot rocket. Otherwise you will be wearing a snot rocket.

As we were heading up a ridiculously steep mile-long hill (which our friends have named "Nemesis") I started laughing, mainly to keep myself from crying. The wind was howling so loud that we couldn't hear each other talk, let alone our mp3 players. It took tremendous effort just to get one foot in front of the other.

The website www.weather.com said the wind was 33 miles per hour with gusts much stronger. If you took my picture during this run, I SWEAR to you my face would look like this (minus the creepy moustache): 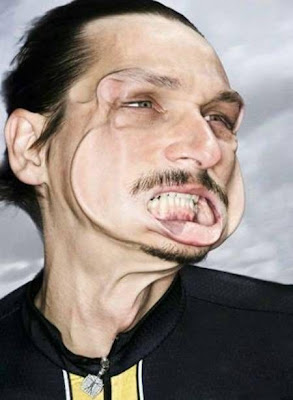 Mel ran 10 miles then I did 7 more. I was so grateful to have her there with me in the midst of the suffering. She is a trooper.

By the end I wasn't feeling real swell. I felt completely exhausted and my stomach was not thrilled with the amount of Gatorade and Gu packets I had ingested. But I survived, and I think every run I ever do will seem easier now after this experience.

"Our sport becomes not just what we do but an integral symbol - on all levels - of who we are."
~Gloria Averbuch
Posted by Cory Reese at 8:56 PM