Tuesday, April 27th 2010: 40 minutes on exercise bike. This was as exciting as watching ugly paint dry.

Wednesday, April 28th 2010: 10 miles @ 10:28 per mile pace. With the craziness of the week, I knew that Wednesday evening would be my only opportunity to squeeze in a long run. Unfortunately it was the usual weather for Hurricane: really, REALLY windy. I ran into the wind for the first half which was slow going.

But the run was awesome after I turned around to come home. The wind was blowing me so hard that I had a hard time keeping my feet moving fast enough. It was kind of like the feeling you get when running down a really steep hill where you are just cruising and there is no way to slow down. But I like that feeling. I made sure to not lift my arms, otherwise I would have launched into the air. 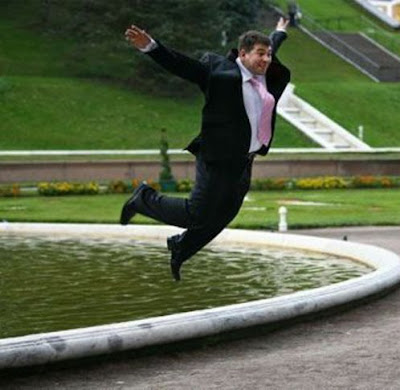 Just for fun I weighed myself before the run. When I got home I saw that I lost 1.8 pounds during the 1 hour & 45 minutes of running. (Fear not. I’m sure those 1.8 pounds were quickly replaced when I got home and stuffed my gut with lasagna and cake.)

Thursday, April 29th 2010: 4 miles @ 10:04 per mile pace. This one was not fun. At all. I regretted it immediately. Was it the fact that it was freezing cold and crazy windy? Or was it the two baked potatoes I ate right before the run? Maybe. Well, no. It was the freezing cold. By the time I got home, my hands and legs were starting to have rigor mortis set in.

Friday, April 30th 2010: Rest. And not a good day for my eating habits: a combo meal from Wendy’s, a large snickerdoodle cookie from Maverik, and a chocolate-covered donut. These are the meals that Champions are made of. Not.

The kids did the 1 Mile Ironman Kids Run and had a fun time. Except for the minor detail that Danica tripped in the first minute, scraped up her hands, then cried the rest of the way. But she finished the race! I figured plenty of other people would be crying there the next day. 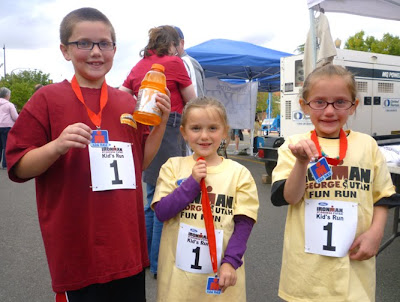 See if this Ironman video doesn't give you goose bumps:

Click Here to see the pictures of our race-day experience.
Posted by Cory Reese at 3:44 PM