I was so excited to watch the inaugural year of the Ironman St. George Triathlon in our home town. These incredible athletes swam 2.4 miles in Sand Hollow Reservoir, biked 112 miles over steep red hills, then ran a full 26.2 marathon.

Jackson was my companion for the morning swim. We arrived at the shuttles around 5:45am, and got to the reservoir with plenty of time before the 6:50am start. 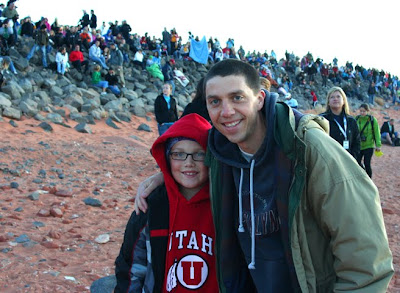 One of the canoes on the support crew was in a perfect spot to be part of a beautiful sunrise. 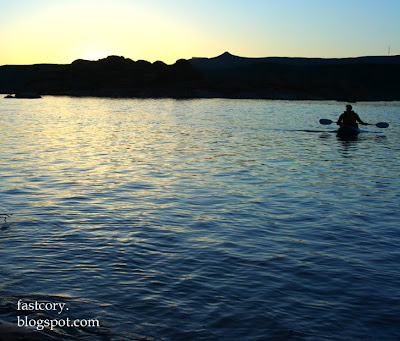 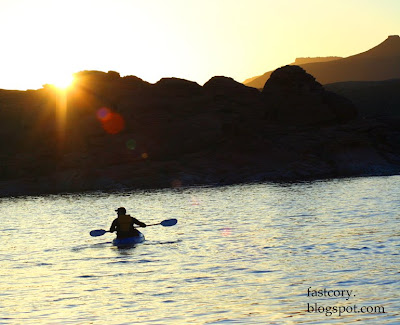 The start of the race brought a frenzy of splashing water. One athlete told me it was like trying to swim in a mosh pit. 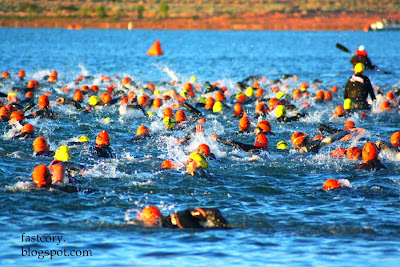 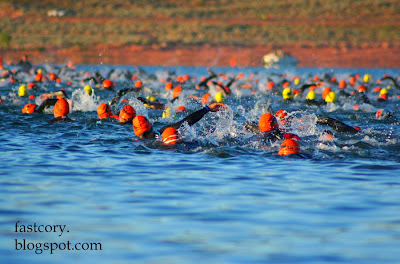 We moved to the area where athletes finish the swim, then grab their supply bag with their bike helmet and change of clothes.

It was an amazing thing to look into their eyes following the swim. I saw some fatigue. I saw some nervousness. But I also saw fire: their eyes were full of passion and determination. It was a really cool feeling to be cheering for them or yelling "Good job!" and then have one of them look up to say "Thank you!" I know how much the fan support helped me when I ran a marathon.

Just one of the amazing athletes was this man who cruised by with a prosthetic leg. I thought about what he must have felt in that dark hour when he lost his leg. And then to see him now competing in an Ironman triathlon was such an inspiration. 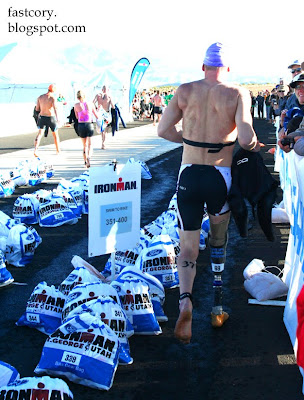 There was a specific moment when I realized just how challenging this swim was. It was when I saw my friend Ashley collapse and lay under a space blanket for a long time. I couldn't believe what I was seeing. Ashley is one of the toughest, strongest, fastest people I know. So to see how much she was struggling after the swim was an eye opener. 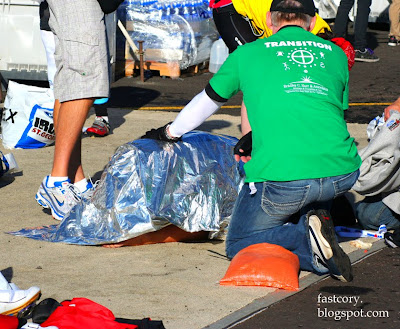 The water was so cold that the athletes just stood there quivering. They seemed to be frozen solid. I heard people saying that their hands, feet, and faces were completely numb. I could see the goose bumps on Ashley's legs when her body finally agreed to start moving again. I felt so proud of her. 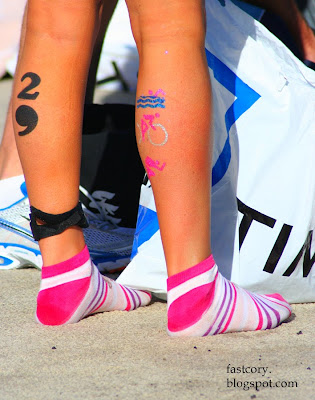 There was a huge area of bikes that athletes had to weave through, then find their bike before heading out on the bike course. 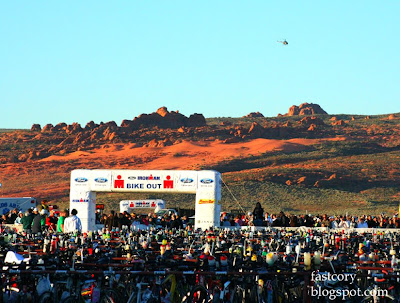 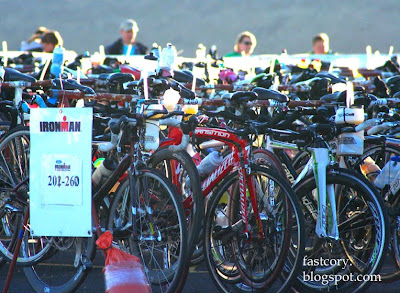 We moved again so that we could watch the athletes head out on the bike course. I talked with many athletes who said the steep, continuous, constant hills of the course were absolutely brutal. 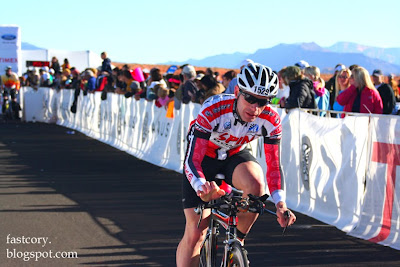 Later in the day Mel and I went to downtown St. George where the race ended. 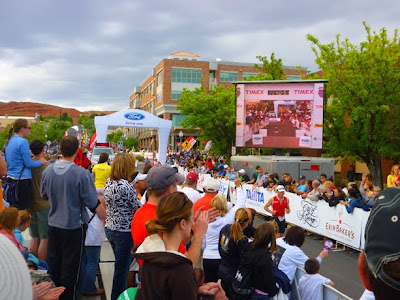 It was hard to imagine what these athletes must have gone through over the last twelve or fifteen or even seventeen hours (the time limit for completing an Ironman). 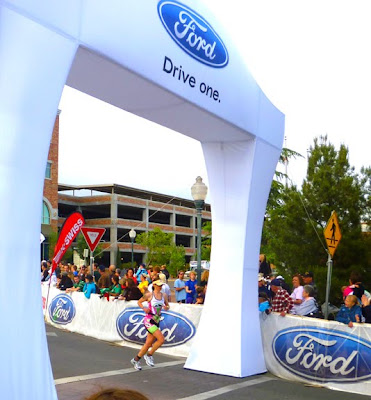 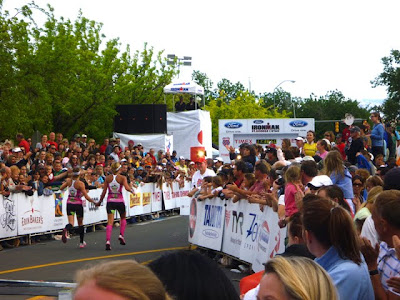 Mel and I were able to be part of the best volunteer crew for the whole race: we were "Catchers" at the finish line! We worked from 7:00pm until nearly 12:30am. Our job was to help each athlete who just finished the race. We met them right at the finish line, put a space blanket around them, and walked with them to get their medal, a drink, and escort them to the medical tent or meal area. This was our work area for five hours: 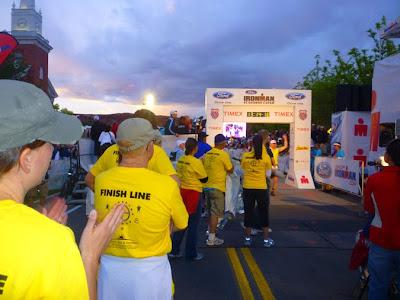 I felt truly privileged to be part of their journey and to help provide support after what they had accomplished. When we grabbed each athlete, their skin was so cold and clammy. They were dehydrated and completely exhausted. 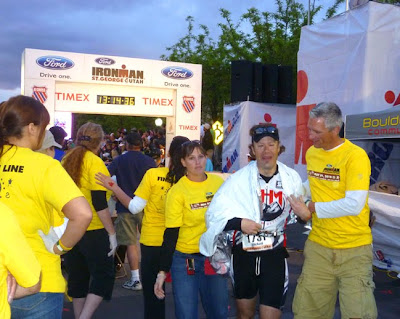 Over the course of our five hours, I saw three women completely pass out right at the finish line. It was a little scary to see them collapse unconscious. It proved to me how much the mind is involved in an endurance event like this. Once they got to the finish line, their brains had accomplished the needed task, then shut down.

One young lady I caught at the finish line seemed okay physically but not mentally. She kept telling me that she ran the whole way. Except for some parts. But she ran the whole way. She had really big eyes with that Dear-In-The-Headlight look. She said she felt spacey. I wasn't surprised. I said "Do you want to stop at the medical tent?" She said "Well, I don't know. What do you think?" I said "Um, yea, I think that would be a good idea." She said "Okay. I do too."

We worked hard. We walked a lot. We worked with urgency. We knew we had lots of people to help. Mel got thrown up on twice but didn't mind because it was part of the experience and it was part of helping someone else. I admire her. I got lucky to have the wife I have. She also had the opportunity to help this man: 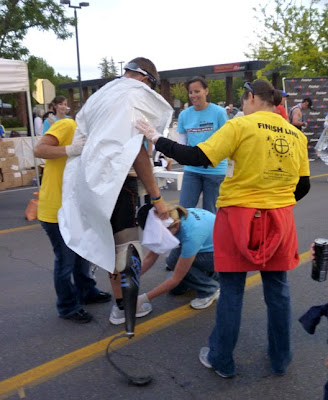 The thing I loved the most is that the athletes were so appreciative and kind. They kept saying over and over how thankful they were for my help, and said that all the volunteers they met along the way were amazing. I really cherished the few minutes I was able to spend with each athlete to get them where they needed to go. 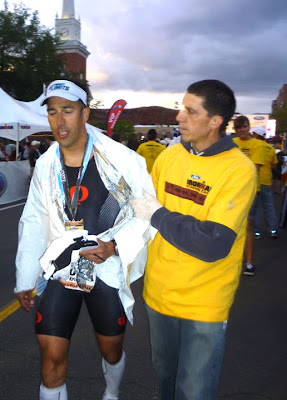 One lady I helped was 51 years old and said that this was her 21st Ironman! And she added that this was the hardest course that she has ever done. One guy who looked just like Jonny Fairplay from Survivor was so happy at the finish line. He kept thanking me and giving me hugs. I admired his enthusiasm. 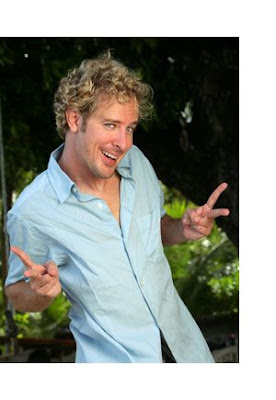 Being part of the St. George Ironman was such an amazing experience. I didn't want it to end. I'm so thankful I had this opportunity, and I'm glad I could share the experience with Mel. 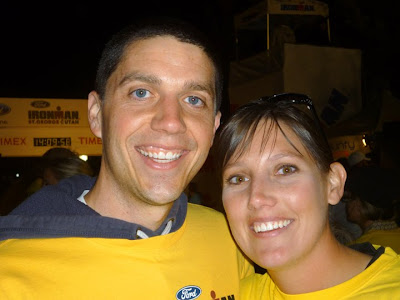