Monday, July 26th 2010: 5 miles @ 12:11 minutes per mile pace. Mel and I went out early in the morning. Maybe it was too early and we were still half asleep. Or maybe it was just too hot outside, but we ended up walking the last mile.

Tuesday, July 27th 2010: 5 miles @ 10:39 minutes per mile pace. I couldn't bring myself to wake up early and figured it wouldn't be too bad to run in the evening. Boy was that a dumb decision. When I got a chance to leave, it was still 97 degrees outside and the run wasn't very fun. Actually, the heat made this 5 mile run harder than a 15 miler a few days later.

Thursday, July 29th 2010: 15 miles @ 11:47 minutes per mile pace. When Mel and I walked out the door at 5:00am it felt like walking into a sauna. The storm clouds trapped the heat so it was warm and muggy. A few miles down the road we reached this sign which caused Mel to scowl in disgust: 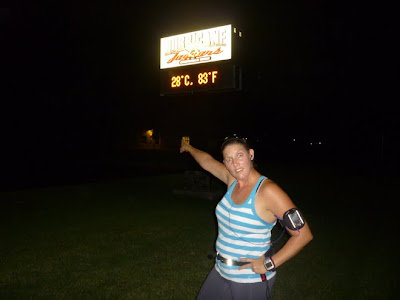 A little while after the half-way point, we saw a glimmer of the sun. It turned out that this would be the last time we'd see the sun. Right after this picture it started to pour rain which continued for the rest of the run. 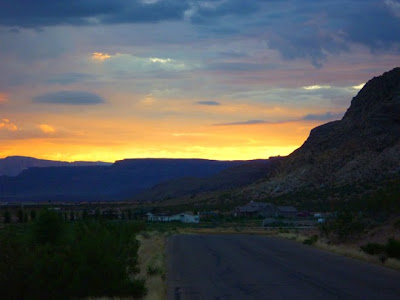 I appreciated the rain even more than the Hostess donuts I left as treats along the route. The dramatic drop in temperature was a welcome relief. We didn't push the pace and did a 5/1 run/walk ratio and both of us ended up feeling great at the end of the run. I never felt tired or exhausted. Hopefully this was a good trial run of what we will do at the Park City Marathon in three weeks.

Friday, July 30th 2010: 4 miles @ 10:00 minutes per mile pace. We went up to the Uinta Mountains for a family reunion and the tree-lined dirt roads made me anxious to strap on the running shoes. 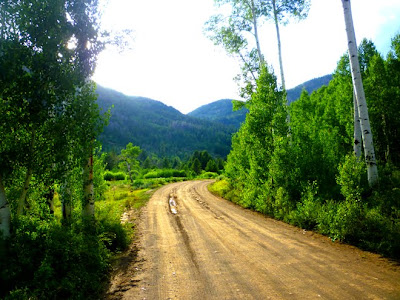 I was having a grand old time until I came across a big, angry-looking black cow. He looked like the kind of cow that was just waiting to retaliate against a human being for all the injustices his species has been a victim of. He looked like he was preparing to avenge all his friends who have become part of a meal at McDonalds. He didn't take his glaring eyes off me. I prayed for safety and nearly wet my pants. 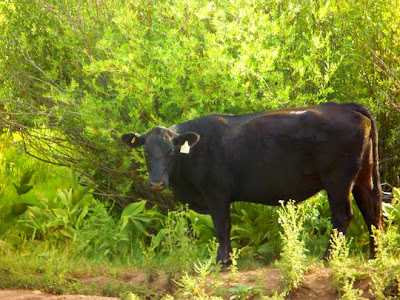 I decided I better take a picture of the angry bovine just in case I ended up dead on the road, smushed flat as a pancake. Then at least my family would have evidence of who the murderer was. I'm happy to report that he kept his distance, and I didn't end up as road kill.

Saturday, July 31st 2010: Hike to Grandaddy Lake in the Uintas. We were fortunate to avoid any encounters with moose. Or bears. Or cows.
Posted by Cory Reese at 6:58 PM