I was excited to run the Park City Marathon for my third marathon. Mainly because I planned to run it with Mel who was doing her first. We stayed with her sister and brother-in-law Angie and Gary who were awesome to let us crash their pad and watch our kids while we ran.

I had fun jumping on their trampoline the night before the race. Mel got this photo which looks like it had a long appointment with Photoshop but it really didn't. 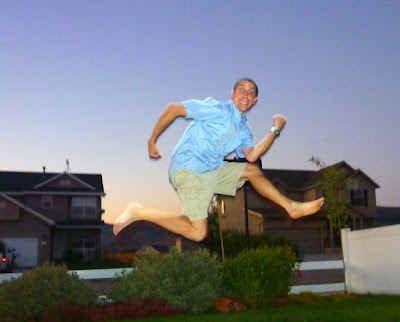 One of the things I REALLY liked about Park City was that it was a big loop which started and ended at the same place. It was so nice to not take a 30 minute bus ride to the starting line. 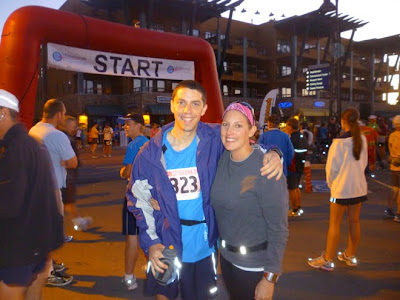 There wasn't a cloud in the sky so it was a little cool at the starting line but everyone knew it would be a hot day. 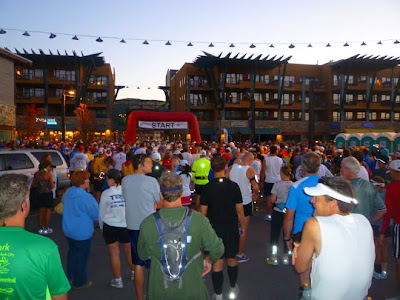 We made a little pit stop at a port-o-potty before even reaching the first mile marker. By the time we started running again...we were in last place. LAST. Like - we looked behind us and there was nobody there. It worked out okay though because we had fun seeing how many people we could pass over the next 25 miles.

Without a doubt, my favorite part about this marathon was the dirt. I'd guess 9-10 miles were on dirt roads or dirt trails. I was in heaven. My feet were built for dirt. Mel, on the other hand, didn't love the dirt quite as much because she got lots of rocks in her shoes. Around mile 7 we passed through this tunnel and I got my favorite picture of the day: 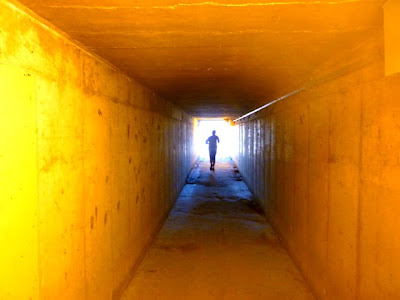 Around mile 10 I started to get worried. We were doing the regular walk breaks but Mel was already breathing heavy. I think maybe the altitude was getting to her. I had my mind on other things. We were on a long dirt road scattered with cool rocks. My eyes were focused right in front of me to look for rocks I could stop and pick up to add to my pack. The miles floated by and I was feeling in the zone.

The hills in this marathon are absolutely CRAZY. We heard people joking that somehow the course seemed to be "uphill both ways". This is the elevation chart from my watch. Especially from miles 13-16, check out how the hill is almost vertical.

My sister Hollie was a volunteer at the race. She helped with packet pick-up the night before, and directed traffic at an intersection during the race. We met up with her right in the middle of the ugly hill and it was a welcome relief to talk with her for a few minutes. I am so thankful she was able to come and be part of the day. She was the best cheerleader of the whole course. 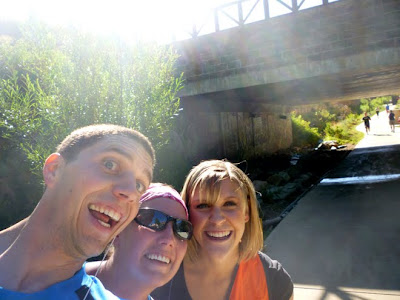 By mile 14 it was getting HOT. It's hard to estimate temperature while running, but I'd guess it was at least 672 degrees. Either an atomic bomb exploded and my skin was starting to melt off....or we were in the middle of running a marathon.

The scenery along the course was beautiful. Surrounded by the beauty of Park City helped take our minds off the pain. Okay, not really. But it gave us something nice to look at. I really liked this huge tree full of shoes hanging from the branches. 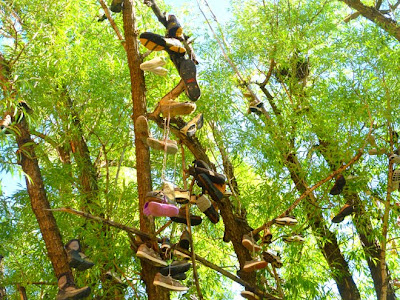 Around mile 18 I heard someone talking. I thought maybe my mind was playing tricks on me. But I kept hearing a voice over and over. I turned off my mp3 player and realized what I was hearing. Mel was saying over and over again "Light and easy. Light and easy." We wished we were as happy as these people: 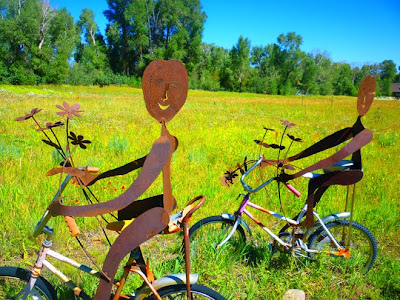 Because of the fact that much of the race was on trails or dirt roads, there weren't too many spectators. But in the middle of a particularly hideous hill we saw some needed encouragement. 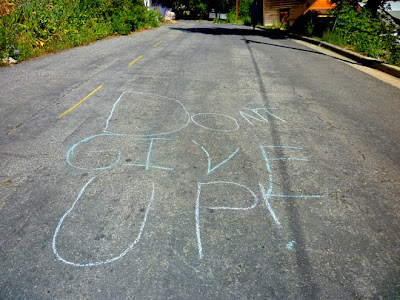 At mile 20, there was an aid station called "The Oasis". They had lots of different drinks, Hammer Gel, and pastries. There were chocolate cake donuts which looked heavenly. It turns out this wasn't very smart. My stomach immediately felt sick (duh!). I'll put this decision in the category of "It seemed like a good idea at the time."

A few miles later we reached a highly energetic aid station. People had water misters and misted runners who needed a cool down. All the volunteers looked like beautiful women. ALL of them: 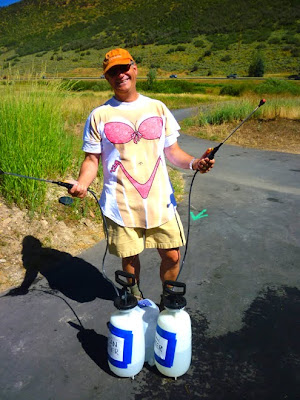 I was surprised how well Mel did especially during the last 6 miles. I think she ran more than I have run in the last 6 miles during my previous marathons. I was feeling really good. I was feeling REALLY hot and tired, but not nearly as bad as previous races. The greatest thing was that I never had the paralyzing leg cramps that attacked during previous marathons. I never felt like I "hit the wall" and I think I could have run a few extra miles if I wanted to. I think it was the walk breaks and slower pace that left me feeling so good.

It is a surreal feeling toward the end of the race when you see a mile marker saying "25 Miles", then a marker that says "26 Miles". I just can't comprehend how a human body can go for 26.2 miles. I was so proud of Mel for what she had accomplished and I was so happy I was able to be with her during her first marathon.

We held hands and gave each other a kiss on the finish line with a time of 6 hours and 1 minute! 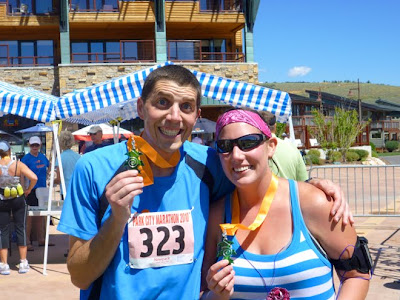 "It's not like somebody else can run a marathon for you. It's all you out there. Finishing means you can say 'There's not a lot I can't do.'" ~ Kenneth Feld, Owner of Ringling Bros. and Barnum & Bailey Circus 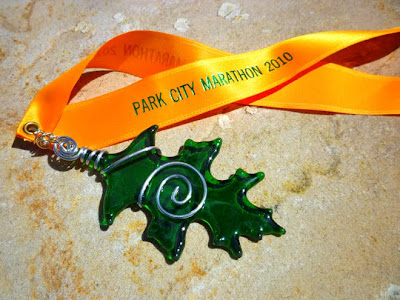