Mel's Summary of Her First Marathon:

First of all, I can’t believe I actually signed up to run a marathon, let alone the hardest course in Utah. I put in my longest run of 17 miles before race day, which felt good, but then something bad happened. I got sick. Really SICK! Flat in bed for 4 days sick. I was so nervous I wasn’t going to be able to run, or that I wouldn’t finish, or worse to not even start. I recovered after a reluctant course of antibiotics & some well needed rest.

We were fortunate to have a beautiful sunny day. I didn’t even think about sunscreen, hence I feel & look as though I was thrown in a turkey fryer. One of the volunteers asked me at mile 22 if I wanted some sunscreen. By then the damage was already done. As Cory mentioned in his post we had to take a bathroom break at mile 1, & that we were dead last after the break. I did not want to be the last person to finish. Little by little we started passing people & I was feeling better about not coming in last place.

Surprisingly I did not hurt anywhere the entire race except for a little ache in my ankle, but nothing serious like in previous races. I will attribute this to the many many hills we ran up. Apparently my body likes me to run uphill, but my mind likes me to run flat or downhill. Cory told me I couldn’t start hurting until about mile 10. I told him I wasn’t hurting at all. I just felt like someone was grasping my lungs like they were being milked like a cow. I was wheezing like an asthmatic & breathing like an 80 year old chain smoker. 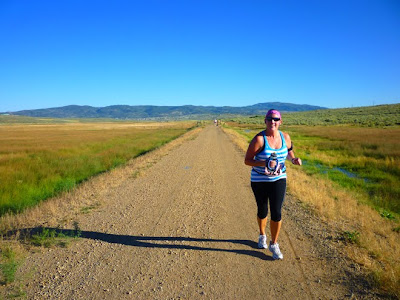 We made it to about mile 14 where we saw a breath of fresh air. Cory’s sister, Hollie was a volunteer flagging people the right direction. Her cheerfulness helped get me through the next 3 death miles which went to the top of Deer Valley. We reached Hollie again, got another bottle of refreshing cold water & gave a hug goodbye to hopefully see her at the finish. We kept trucking on having a little relief with a few flat/downhill areas, but more hills came our way. Mile 20 was the “Oasis” with juice, donuts, muffins, even champagne if you wanted. I didn’t partake of the bubbly.

Cory gave me pointers throughout the race which was very helpful. He kept me in good spirits. He kept telling me “light & easy”, which one of our good friends Shelly always says. I pretty much chanted “light & easy” the last 6 miles of the race. It helped me remain focused on finishing. And believe it or not, we were still passing people!

I am so grateful that I have the physical capabilities to run & be a good example to my kids. What an amazing experience to have with my best friend. Thanks for all of your love & support! Also, thanks to all of you for your encouraging phone calls, texts, & emails. They mean more than you know! 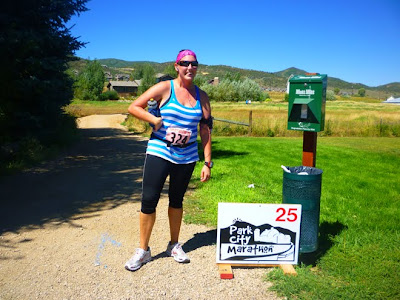