One of the athletes I admire most is runner and World Record holder Usain Bolt who absolutely embarrassed his competition at the Olympics. He is CRAZY fast and confident.

I made an enormous mistake at the recent Top Of Utah Marathon. I always try to ham it up for the race photographers, and this race was no exception. Then I remembered a cool action that Usain Bolt made when he set the world record at the Olympics. Well, I kind of remembered what he did. I thought I would try to mimic his Superman move, which was highly ironic since he’s so fast, and I’m so, well, not fast.

My fatal flaw was the complete lack of preparation and research about exactly WHAT Bolt did. I THOUGHT I remembered. But obviously there was a blemish in my memory. This resulted in a blatant injustice to Bolt. Just look at this comparison in our posture: 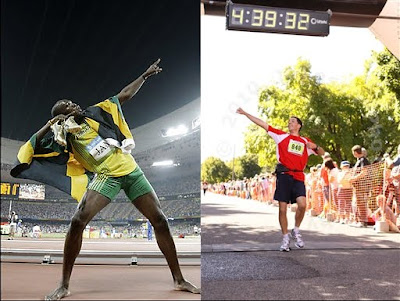 Here are the major problems:
1) Usain Bolt looks incredibly awesome.
2) I, on the other hand, look like an incredibly nerdy cheerleader.

Honestly, this is just ridiculous. I ought to be am ashamed of myself. Here are the main differences between me and Bolt.

1) Bolt has his fingers pointed up. I have my fists clenched.
2) Bolt is strong and muscular. I am skinny and gangly.
3) Bolt is wearing his country’s flag. I am wearing a fanny pack.

I’d like to assure you that I’ve learned my lesson. I will never again try to feebly attempt to imitate someone cool without first researching exactly WHAT they do. With luck I hope to avoid any future impressions of looking like a cheerleader going to cheer at a chess tournament.
Posted by Cory Reese at 7:09 PM