Tuesday, October 26th 2010: 4 miles @ 9:03 minutes per mile pace. You would not believe how insanely cold it was in the morning when I went running. It was windy and I didn't expect it to be that cold so I didn't dress warm enough. I would have paid good money for some Band-Aids to cover my nips. If I had gone only one more mile I would have surely cut holes through my shirt.

Thursday, October 28th 2010: 19 miles @ 10:26 per mile pace. I knew we were going to have things going Friday and Saturday and that I wouldn't be able to do my last really long run before the Mesquite Marathon unless I did it Thursday night. I had a long day at work, got home late, and started running late. Here is the view out my front door as I was leaving: 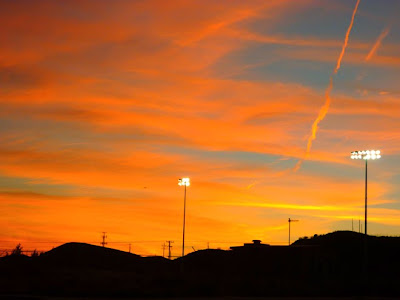 It was dark and I didn't want to be too far away from home so I pulled the same stunt as last week and did the one-mile loop around the block. For. Nineteen. Miles. When writing this I realize how completely ridiculous this sounds. It was definitely not the optimal setting to run 19 miles considering that I was already worn out from the day.

Here are my "Cup Half Full" thoughts about the run: