Tuesday, October 12th 2010: 4 miles @ 9:46 per mile pace on Widowmaker. The absolute hardest part of the last few runs has been dragging myself out of bed early in the morning.

Wednesday, October 13th 2010: 22 miles @ 14.9 mph on the bike around the Sand Hollow Loop. This was my first attempt going UP the really ugly hill called Nemesis. I felt very proud that I had made it all the way to the top without stopping. But I was even more proud that I resisted my strong urge to barf.

In the evening we met some friends at the track for a speed workout (my first in ??????). I had fun running with Mel, the Smarts, Liz, some newcomers, and Kylee's crazy fast first grade teacher Mr. Clay. I did 5 800's (two laps around the track). My times were 3:41, 3:53, 3:41, 3:44, and 3:28. That 3:28 ranked as the stupidest thing I did all day. Let me tell you why: because I tried to keep up with Mrs. Elizabeth Dansie who is doing the Boston Marathon in a few months. I stayed with her for the first lap, but fell back on the second. I felt terrible. Here are a few thoughts I had during that second lap:
Thursday, October 14th 2010: Nothing. My body needed rest following the previous day's TWO near-vomit experiences.

Friday, October 15th 2010: 4 miles @ 9:25 per mile pace (not including the three times I was hunched over trying to breathe). I ran in the Red Cliffs Desert Reserve. A little rabbit darted right out in front of me and I nearly wet my drawers.

Saturday, October 16th 2010: 11 miles @ 10:36 per mile pace. My right foot started hurting the last half of the run which was strange. This is the first ailment I've had in a while. I think maybe I overdid it at the speed workout. I'm sure it will start feeling better with a few days rest.

Mel knew that I wished I had been able to register as a Grand Slammer. So after the St. George Marathon she surprised me with a special medal that she had ordered: I thought this was so thoughtful of her. I bet all those other Grand Slammers are jealous because I'm sure their medals don't say "WE LOVE YOU!" Mel is basically awesome. 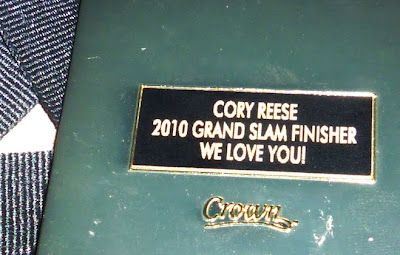 I wanted to tell you about a few upcoming races I will be running. Let me know if you want more info on registrations.

October 30th 2010: Spooktacular 5k @ Three Falls Elementary School. This is a fundraiser for the local elementary schools. AND costumes are encouraged. (FYI: I will without a doubt be wearing a costume.)

November 6th 2010: Butch Cassidy 5k/10k in Springdale. My friend Tom puts on a great race and I'm looking forward to the fast 10k. I did the race last year and the scenery around Zion National Park and Grafton is incredible. (Click on picture for a link to the race site.) 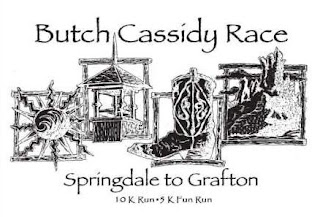 November 20th 2010: The Mesquite Marathon!!!!!! I hadn't originally planned to do this one but our friends Darrin and Shelly invited us to join them and I couldn't pass up the invitation. This will be my 5th marathon this year. I can't wait. I'd love to have you join me at any of these races! 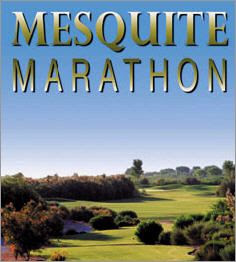 Stay tuned for all the training updates and race reports.
Posted by Cory Reese at 12:15 PM