I May Have Seen A Ghost

Monday, January 24th 2011: 9 miles @ 10:21 minutes per mile pace. I honestly think I was half-asleep during this run. I know I went because my Garmin says I did. I know I got home right after my daughter woke up and she said I smelled like bacon. But I slept through everything else.

Tuesday, January 25th 2011: 5 miles @ 9:35 per mile pace. I did another 4 miles that night on the treadmill so that I could have two rest days before the Saturday long run. I read somewhere that an important part of training for an ultramarathon is to practice walking fast. So I did some of this on the treadmill. If it weren't for ESPN I would have been bored out of my ever loving mind.

Wednesday, January 26th 2011: 11 miles @ 10:29 minutes per mile pace. I ran on the dirt road near Diamond Ranch Academy. Unfortunately there were lots of cars that drove past in the first few miles and the road was uber-dusty so I'd estimate I consumed around 320 calories worth of dirt. Delicious. My contact lenses were uber-gritty.

I was in close proximity to the most cows I have ever seen on a run. They were everywhere in big herds. It goes without saying that I had to dodge lots of pies in the road. And I'm not talking the coconut cream kind.

Many of the cows were safely confined behind barbed wire: 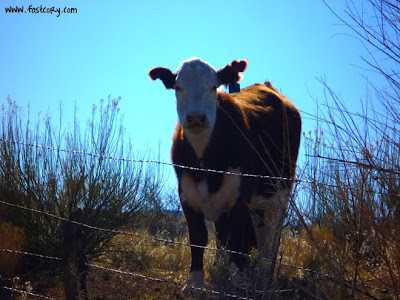 But the majority of the bovine were in big herds uncomfortably close to me on the side of the road. I don't know why, but big black cows staring at me from a few feet away gives me the willies. 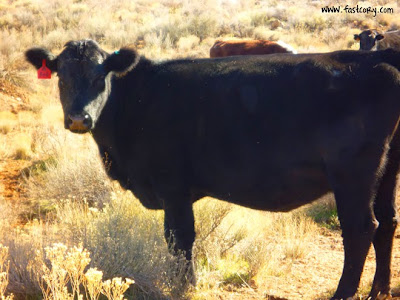 It was cold and windy. And if there are two things I hate, they are, in no particular order...cold...and....windy. And Cream of Mushroom soup. I hate that too.

I love my wife and children. I love my extended family and friends. I love junk food. I love the idea of Celine Dion going mute. Although what I didn't love was this hill in the middle of my run: 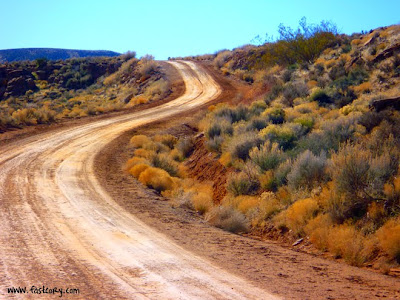 Saturday, January 29th 2011: 24 miles @ 11:29 minutes per mile pace. I left for my run at an inhumane hour of the morning (I didn't even see the sun until mile 18). The first four miles of the run were through neighborhoods but then I reached an uninhabited area with miles of empty fields. I again started to get the willies.

It was pitch black except for the 10 feet ahead of me that I could see with my head lamp. I had to keep my eyes on the road to make sure I didn't step in one of the many holes. Did I mention that it was pitch black? And then suddenly out of nowhere an old man appeared right in front of me. He didn't have a light and was taking a walk at this inhumane hour in the pitch black. I wondered if I saw a ghost.

I nearly needed a clean pair of pants.

You know the part in horror movies when the bad guy suddenly pops out from behind the door and everyone screams? Yep. It was exactly like that. The following is an actual picture I have taken of my view in the dark using my head lamp. Then I added a man similar to who I saw on my run: 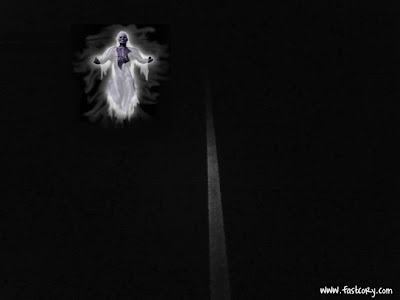 I took regular walk breaks and kept my pace a little slower and was feeling amazing after seven miles. So good in fact that my pace really sped up. By the time I realized how fast I was going I think I had gotten myself into trouble. Because a few miles later I got shot in the rear end by a blow dart.

Blow darts to the rear end don't feel awesome. I walked much more over the last 4 miles. I'm optimistic that some ibuprofen and a day off tomorrow will help. When I finished I didn't feel proud of myself for running 24 miles. I just kept thinking "How in the name of Meb Keflezighi am I going to run 50 MILES in less than 2 months?!?!?"

"I don't rate myself as a fantastic, talented athlete. I just have perseverance. I'm a cart horse. I work hard."
~ Colleen DeReuck, Four-time Olympian
Posted by Cory Reese at 10:04 PM