What happens when you and your spouse have airline tickets that need to be used, AND you're feeling spontaneous? Allow me to answer that question for you. On a Tuesday night you look around on the internet for upcoming races, find the 2011 Southern California Half Marathon coming up over the weekend, register for the race, and fly to California two days later.

The hotel we stayed at had an awesome continental breakfast, which I was incredibly thankful for because before a race, you have permission to eat ridiculous amounts of food and can justify it by calling it "carbo loading". 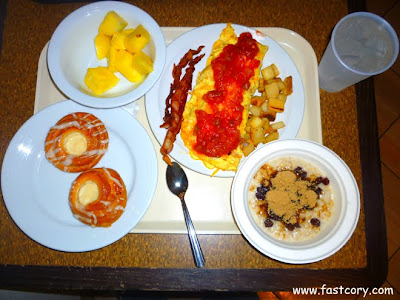 One of the selling points for the race was that it was big. I read that last year more than 6,000 people ran the half marathon. I love the feeling of nervous, anxious, excitement before a race. That anticipation of what may happen in the coming miles is the reason I have developed an addiction to starting lines. 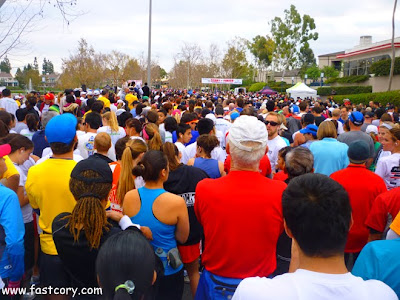 Another thing I was looking forward to was running a fun, casual race with the spouse. Mel is a fun running partner. (Except that she sometimes runs like she is drunk and struggles to stay in a straight line. Hence, we do a lot of hip-bumping. It's okay Mel. I forgive you.) 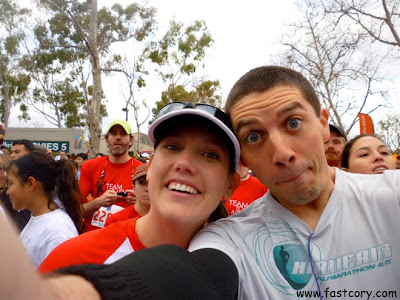 We were enjoying the starting line festivities when all of the sudden I looked behind me and immediately had an intense fear of being killed. Be honest - does this not look like the Unabomber preparing to run a half marathon? 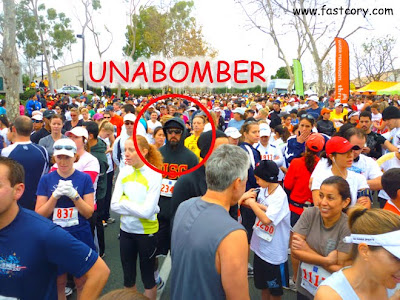 This was probably the most awkward race I have ever done. Much of the route was on a somewhat narrow bike path which would be awesome for a weekend jog, but not so awesome when you cram thousands of people onto the path and tell them to run.

We covered the same roads and bike paths a few times. You can see the steady stream of runners heading one direction, reaching a turn-around point, and then coming back on the other side of the spillway. 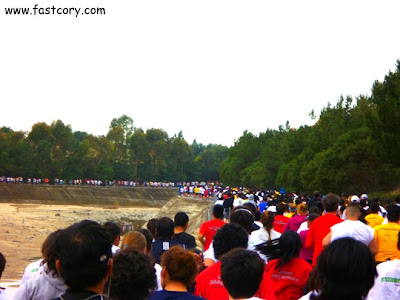 Another unique challenge when we ran on the streets was navigating the little bumps down the middle of the road. So in addition to avoiding tripping/being tripped by other runners, we had to avoid these little puppies that seemed to be begging someone to eat asphalt. 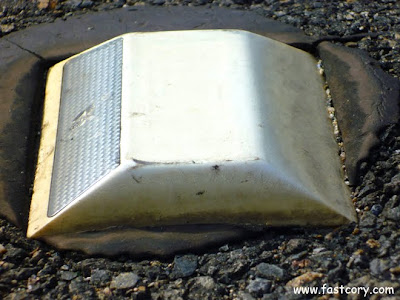 One of the most amazing things about the race was the high amount of kids that ran the half marathon. Kids! Apparently schools from all over southern California have a training/incentive program for the kids to run the race and there were thousands of them. I counted the age divisions, and there were honestly more runners under 18 years old than any age above 18!

This was inspiring. It was cool to see kids cruising down the road without a fancy GPS watch and high tech running shoes. They were just having fun. I was stunned to see how many were ten years old. Or twelve years old. Or fourteen years old. Inconceivable! I would have NEVER been able to do something like this at their age. Getting kids involved in such a healthy activity at such a young age is brilliant. I wish everywhere had a program like this.

It was an intimidating feeling - you can't slow down. You can't speed up. You can't pass anyone. You are just part of a moving blob. Thankfully nobody tripped. Otherwise a domino effect would have started and every single other runner ahead and behind them would have toppled over too. 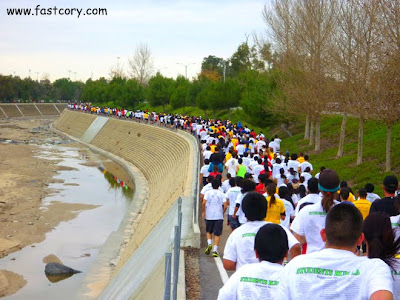 We crossed through a few tunnels along the race and I got my favorite picture of the day. Somehow this picture of Mel leaving the tunnel appeared to be black and white. 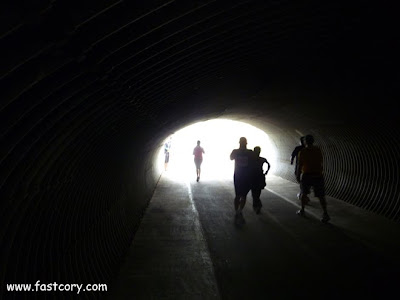 I learned a valuable lesson at the Southern California Half Marathon: you hear funny things during a race when you aren't wearing headphones. One kid seemed to be struggling, and the only way he could keep moving one foot in front of the other was to sing Michael Jackson really loud. I don't think he was trying to be funny. I think he was hurting. Another lady was swearing so much that a sailor would have blushed.

And then guess who we saw at exactly mile 12.7?!? THE UNABOMBER!!! We passed him and I just had to get another photo. You'd never believe it, but it's hard to be inconspicuous when taking a semi-mug shot of a potential mass murderer. 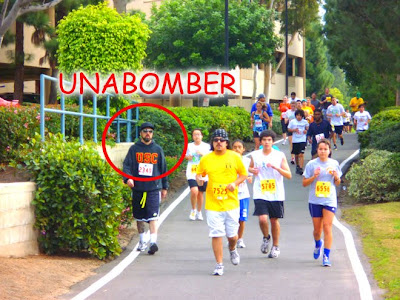 We finally reached the crowded finish line amid an unusually high number of cowbell-shaking spectators and finished in 2 hours 27 minutes. You may soon be able to see some of these race pictures on America's Most Wanted. 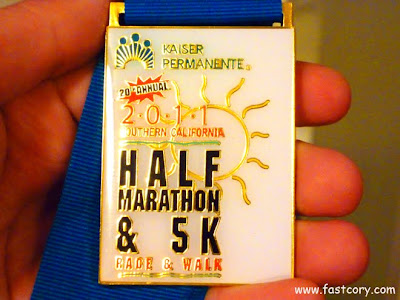 "Racing is the fun part; it's the reward of all the hard work."
Kara Goucher
Posted by Cory Reese at 6:31 PM