Running In The Snow

Monday, January 3rd 2010: 20 miles @ 11:29 per mile pace. I had the day off work so I figured I'd get my long run in for the week. I had no idea that the weather service had issued a Winter Weather Advisory so as I walked out the door I saw this: 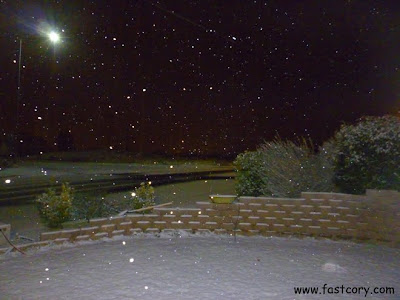 Of course I was less than thrilled. I contemplated just staying home but then figured it might be good training for the Buffalo Run to do some miles in the snow. On the plus side, I didn't get overheated or dehydrated the whole time. On the negative side, my fingers felt like frozen Vienna Sausages. My nose was on perma-drip. And the roads were pretty slick.

I still can't get the St. George Ironman out of my head. But the Ironman marathon course is positively NUTS. So I decided I'd see if I could do it by running the hardest route I could find: the 600 North street in Hurricane. The hills are insane in the membrane, and I gained a total of 2313 feet during the run. For you locals, I ran from my house to the fire station, then back home. Then did the whole thing again. 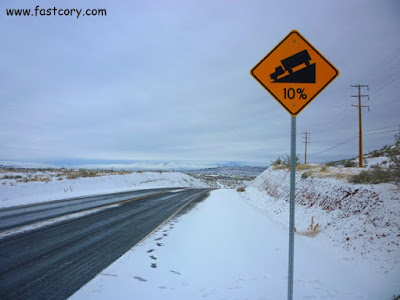 It was long and I was definitely sore afterward but I survived and didn't lose any fingers to frost bite. I truly wish the Ironman was full so that I wouldn't be in such a dilema about whether or not to sign up. I'm leaning toward attempting this next year.

Wednesday, January 5th 2010: 10 miles @ 10:27 per mile pace. I woke up very early so I could get the run done before work and saw two incredible shooting stars. They were like fireworks. Which seemed comforting considering that it was 23 degrees.

Thursday, January 6th 2010: 5 miles @ 9:54 per mile pace. I was feeling surprisingly good on this run, and was happy to have that rare feeling that you could push harder if you wanted to. When I reached the turn-around point I saw my friend Darrel and had fun running with him back home.

Mel and I were given some free plane tickets by Delta after our frightning/miserable experience going to Hawaii. We had to use the tickets soon, so on Tuesday we looked around for possible races to run. We came across the Southern California Half Marathon which happened to be coming up........in a few days. We were feeling spontaneous so we booked the flights, registered for the race, and left for California two days later. Being spontaneous is fun.

“To give anything less than your best is to sacrifice the gift.” ~ Steve Prefontaine
Posted by Cory Reese at 6:24 PM