My Journey To The Ultramarathon

My first ultramarathon was coming up in a few short days. I was psyched. I was pumped. I couldn't wait for the 100 mile race. I had a good supply of junk food for my drop bags to get me through 50 miles: 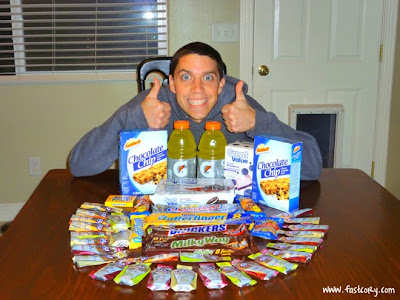 And then the day we were leaving for Salt Lake I got a call from my wife. I couldn't understand much of what she said because she was crying but I could hear that she fell and thought she broke both arms. Then the phone disconnected.

I rushed from work to meet her at Instacare and sure enough, she had broken bones. She broke not one elbow....but BOTH elbows! She was in lots of pain but was reassured that she should start feeling better in a few days. We had a doctors appointment scheduled for my daughter in Salt Lake that we knew was important so we decided to make the trek to Salt Lake.

Believe it or not, you become pretty helpless with two broken elbows. Just imagine trying to do anything without moving your arms. The girls fed Mel a Subway sandwich while we drove: 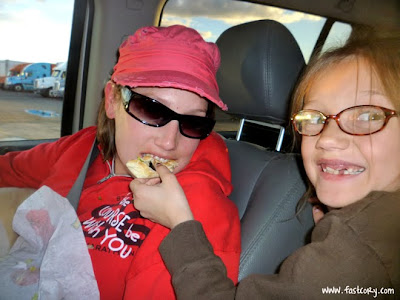 I couldn't help pulling over on the side of the freeway to take pictures of an incredible sunset as the sun faded away. I also had a hunch that my plans to do the ultramarathon may be fading away as well. 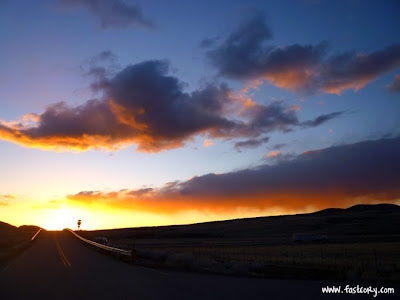 I eventually decided that due to everything going on, I would have to drop back to my original plan of running the 50 miler for two reasons: 1) Mel now wouldn't be able to drive us home after the race and I wasn't sure I'd be conscious enough to drive 4+ hours after 100 miles, and 2) I would be in no condition to take care of her after running that far. She would have needed to be taking care of me.

My amazing mom said she could help care for her while I did the Buffalo Run 50 miler. We made a quick trip to Antelope Island where the race was being held and even managed to see a buffalo! 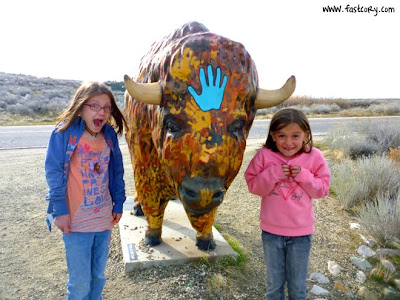 Mel's pain level continued to increase during the night and we concluded that she would go back to Hurricane where her mom could help her try to get into an orthopedic doctor. She was blessed to be able to get into a good doctor Thursday night who said there was enough damage that she would need surgery the next morning. Needing surgery was the final straw. I packed up and came home to take care of her.

I was simply heartbroken. I felt so sad for Mel. And I was sick to my stomach that after training so hard for the last 5 months, I had to drop out of the race. I didn't throw myself a Pity Party. I threw myself a Pity 3 Ring Circus, complete with jugglers, bearded women, and dozens of creepy clowns that pile out of a tiny car.

I fully believe that everything happens for a reason. Without a doubt. But I was a little ticked that God was messing up all the plans I had made. I felt so discouraged about the whole situation.

Fortunately it didn't take me long to realize that things really did work out the way they were supposed to.

Stay tuned for the conclusion of my ultramarathon journey.
Posted by Cory Reese at 10:23 AM