Running With The Reptiles

Tuesday, April 12th 2011: Rest. My knees are still achy and kind of feel like they are grinding. I don't know who put sand paper and rusty nails under my knee caps while I was sleeping, but when I find out who it was, they are getting a mega wedgie.

Wednesday, April 13th 2011: 6 miles @ 11:47 minutes per mile pace. I ran some sections of the JEM trail thinking a softer surface would be better for my knees. They didn't feel as good as I had hoped after taking 5 days off running. (Did I mention I'm running an ultramarathon NEXT WEEK!?!?!)

Thankfully the beautiful trail made up for the CRAZY tornado-force winds. Some sections of the trail look like they are about to crumble underneath you: 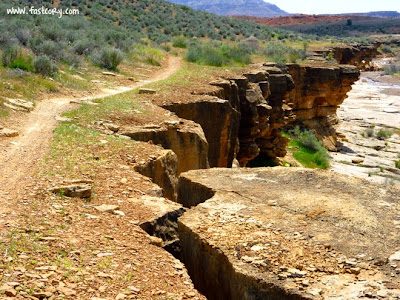 This was the first time I had ever seen anyone out on that trail. Two mountain bikers cruised past and I happened to have my camera ready: 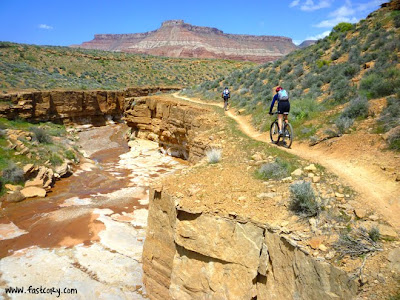 Toward the end of my run I nearly squished a snake that was sitting right in the middle of the trail. I appreciated that it was patient enough to hang out while I grabbed my camera. It also let me get surprisingly close to take a picture: 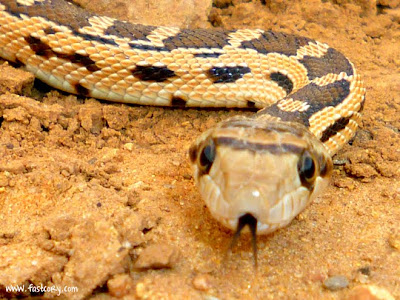 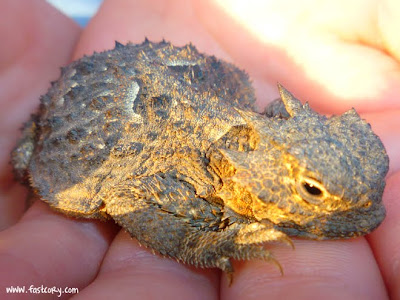 This gave us some good time to make plans for the upcoming science fair. The temperature and scenery were perfect and we had lots of fun together. The only thing better than being outside getting fresh air is being able to do it with family. 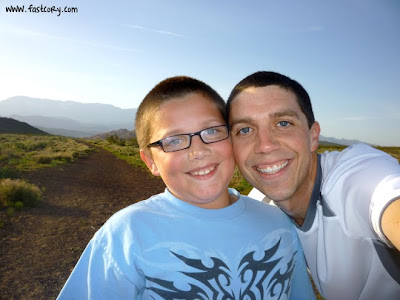 Friday, April 15th 2011: 1 hour walk. At the end of the walk I talked with my friend Tom who was doing a final training run. He ran the Salt Lake Marathon the next day and KILLED it with a time of 3 HOURS AND 54 SECONDS! Incredible. That conversation got some crazy wheels turning in my head. I'll tell you more about that soon.

Saturday, April 16th 2011: 7 miles @ 11:57 minutes per mile pace. I ran on the Diamond Ranch dirt road and it didn't go well. My knees are being very, very pesky. I am SO, SO thankful that they will be feeling better this week. I'm sure of it. They don't have a choice. Red Mountain 50k in 6 days!

"We have been told time and again we were born to success, but a truly run marathon convinces us of that truth."
~ George Sheehan
Posted by Cory Reese at 7:48 PM