I was excited to run the Mapleton Moonlight Half Marathon because it was so different from any other race I’ve done. There were no watches allowed and the winner was the person who finished closest to midnight. I’ll be honest; when I pulled into Mapleton I was skeptical about promises of a big party at the finish line. I wondered how the dozen residents of Mapleton (okay, maybe a few more than that) could make this into an event. 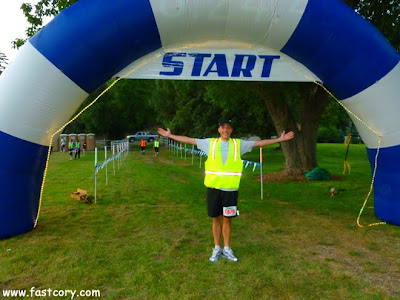 It was so strange to not have a starting time for the race! On the arch of the starting line you could see what time it was, and runners could start whenever they wanted. Remember – the race isn’t timed and you want to finish at midnight. 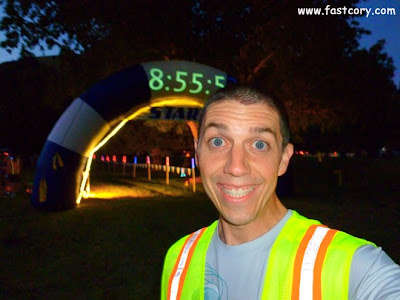 I had a potentially catastrophic wardrobe malfunction: I LEFT MY HEAD LAMP IN MY SUITCASE AT HOME!!!! I am OCD about this kind of stuff. I don’t do dumb things like this! I could have gone Chuck Norris on myself. Thankfully they had free headlamps at the packet pickup. This was my salvation. I restrained my inner Walker, Texas Ranger. 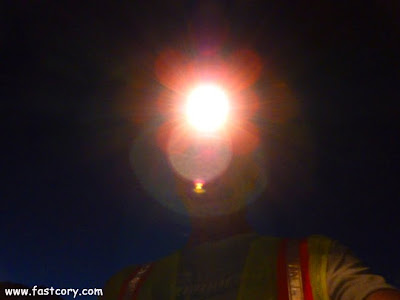 It was so funny to watch runners as they caught the urge and decided to dart past the starting line. Everyone was a little apprehensive, not wanting to start too soon or too late. 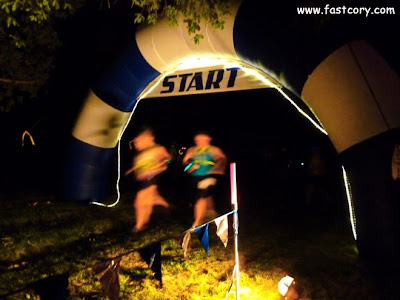 I love this picture which I think was so symbolic of the race. At some point you have to leave the light and safety of the starting line and enter the unknown and darkness in front of you. I suppose that’s true for every race, even if it’s not in the dark. 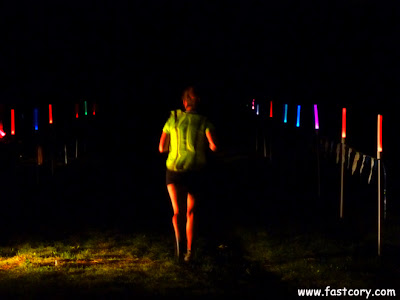 I started the race a little after 9:30pm, planning to take it easy and just have fun. At the first mile marker I heard someone’s watch beep. I considered going Chuck Norris on them with my enormous muscles but restrained myself. It was a unique challenge to take race pictures in the dark. I couldn’t pass up a chance at a sunflower. 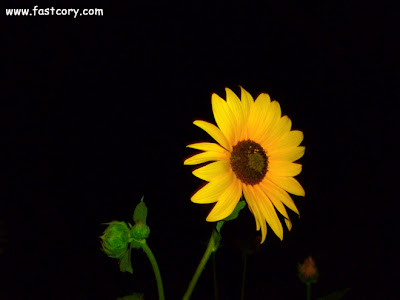 For some reason I never quite got into a groove for this race. Maybe it was all the junk food I had eaten earlier in the day. I never felt out of breath and nothing on me was hurting. I just felt like a slug. I felt like I was trying to run a half marathon in a swimming pool. As a wise man once said, “You’ve got to know when to hold them, and know when to fold them.” I felt like my body decided to fold them at about mile two. I did enjoy running under a full moon: 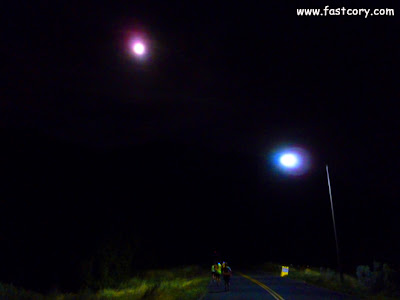 I ran some parts of the race by myself but soon joined a group of runners that looked like a millipede of glow sticks ahead of me. Runners were given lots of glow sticks at the starting line and it was awesome to see colored glow sticks weaving through the dark.

I had no idea how close I was to midnight as I neared the finish line. It was cool that you had to cross under the finish arch and then you could turn around to see what the time was when you finished. This is what I saw! 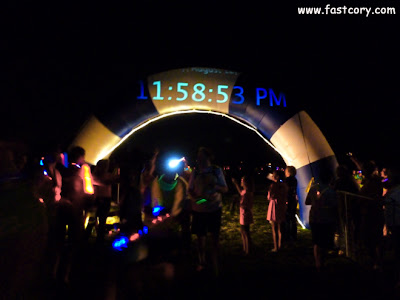 I couldn’t believe I was so close to midnight! 11:58:50pm. I was only one minute and ten seconds too fast! This is as close as I will ever come to winning a race. And then one minute later midnight arrived. And guess what happened…….FIREWORKS! 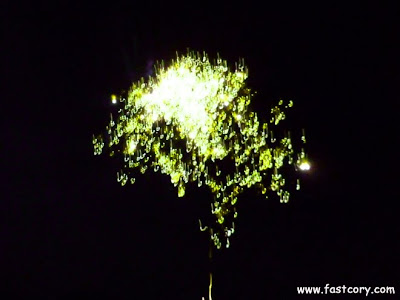 When was the last time you finished a race and then had fireworks go off? Never? Yea, me too. I was really impressed. I was also really happy to be done. 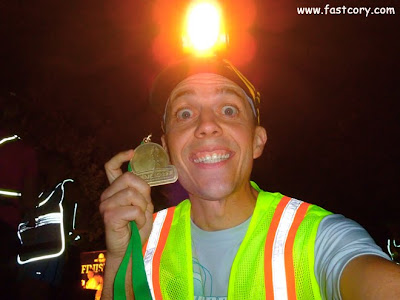 I immediately realized that I was wrong about my skepticism about a party at the finish line. There were lots of people hanging out, music playing, and some of the best food I have laid my hands on at a finish line. They had bananas, watermelon, chocolate milk, ice cream sandwiches, pizza, and the most amazing chocolate brownies that have ever entered my mouth. These brownies were seriously insane in the membrane. Forget medals, just give finishers lots of these brownies. 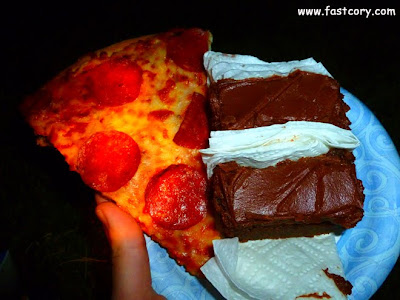 During the race I promised myself that I’d stop and get a Slurpee on the way home if I made it to the finish line. So at 1:30am I pulled into 7-Eleven and there was a guy throwing up all over the sidewalk. He just kept going and going. Previously I would have told you that nothing in this world could make a Slurpee seem less appealing. But I found something that made a Slurpee a little less appealing: walking past a puddle of barf to get your Slurpee. 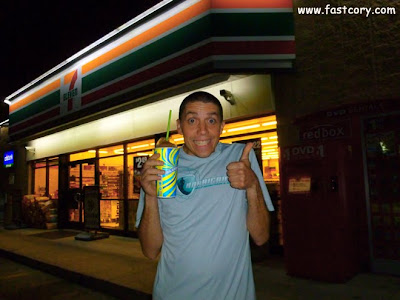 The Moonlight Half Marathon was a fun experience. My only suggestion for next year would be to make the medal in the shape of a brownie. 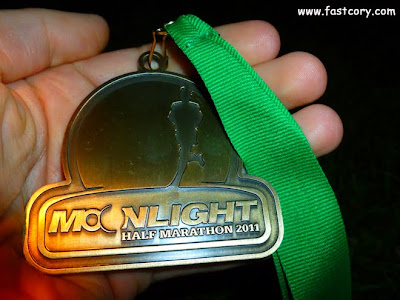 “In running it is man against himself, the cruelest of opponents. The other runners are not the real enemies. His adversary lies within him, in his ability with brain and heart to master himself and his emotions.”
~ Glenn Cunningham
Posted by Cory Reese at 6:31 AM