I was excited for the 2011 Top Of Utah Marathon and had a goal of getting a new PR (under 4 hours, 25 minutes, 36 seconds). The course is perfect and the weather was supposed to be perfect.

During my 7 hour drive up to Logan I stopped at Subway in Nephi for lunch and some people I didn't know called me over to their table. They were going up to TOU also and said they liked my pictures and blog. It may have (did) make my day.

Race morning arrived and the weather..... wasn't perfect. It was raining at the starting line but not terribly cold. Then the announcer said it was time to move to the starting line because the race was about to start. The moment he said that, it changed from rain to a complete downpour. I was so thankful I brought a garbage bag, but my feet were completely soaked before the race even started. Grrr. 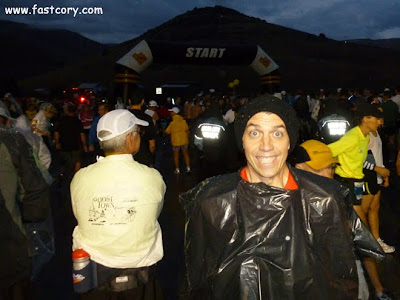 After about a half hour the rain stopped and it looked like the weather was clearing up so I ditched the garbage bag. (Spoiler alert: this was a bad idea.) 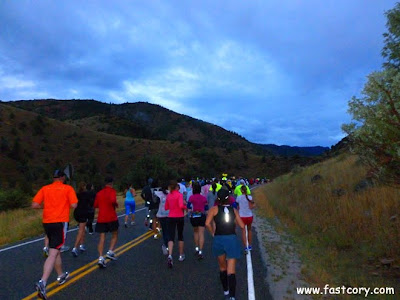 At mile 10 it was like we ran into a wall of pouring water. Pounding thunder shook the canyon and lightning was flashing all over. It was slightly scary and I worried they would call the race. I was so impressed as I looked around me. As we were getting drenched I didn't see one runner whining or complaining or moping. Everyone was so focused and determined that I don't think it really mattered whether it was raining or not.

But it just got crazier. Suddenly the torrential downpour turned to hail! I've had plenty of rocks get into my shoes but never gotten plenty of hail in my shoes. That was certainly a first. The whole scene made me laugh really hard. If an average person saw thousands of people completely soaked running through a hail storm they would have us committed to a mental institution. 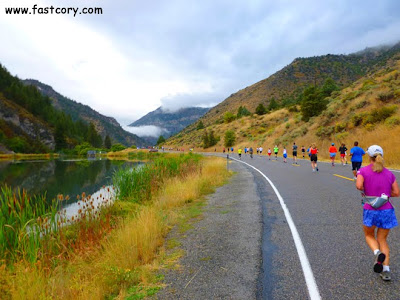 During the race I met a guy named John and we ran a bunch of miles together. He was really nice and was running his first marathon. Runners are nice people eh? 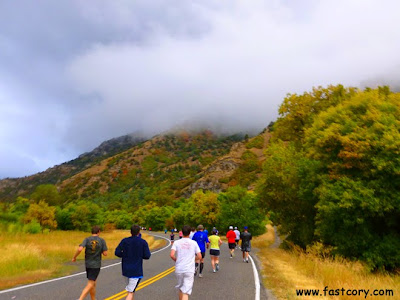 I was cruising along making good time, feeling good when I made a quick bathroom stop at mile 15. This was when my race suddenly got much harder. In that one minute of not running, my legs wound up into tight knots. I tried to stretch them but that made them cramp even more.

I kept running hoping they would loosen up but I just couldn't shake the cramps. It was strange, this hasn't happened for a long time. I was drinking and fueling good, and not going too fast for my pace so it may have just been the downhill or the cold or the fact that I stopped for a minute.

I got nervous at mile 20. The thunder really started to kick up again and there was a dark storm rolling in. I really didn't want to run another hour in the rain (thankfully it held off). 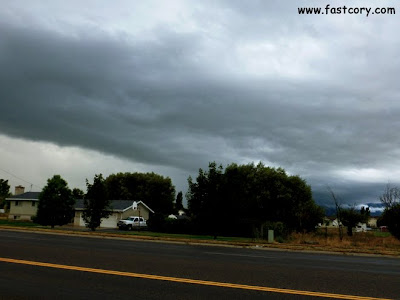 In the last few miles I knew I'd really have to push to get under 4:25. My legs just weren't cooperating. My shoes felt like they were 3 pounds heavier. Oh, wait! They were! I was popping Gu packets like Skittles to try and get one last push. Seeing the finish line in the distance made me ecstatic. 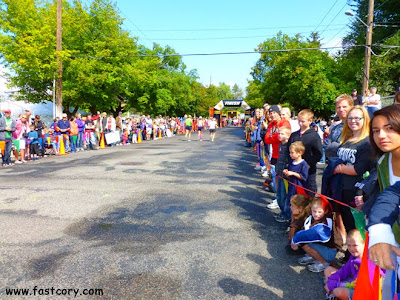 I finally made it and jumped across the finish line. I immediately regretted trying to jump because I probably got about 3/4 inch of air. At least I didn't pull the same stunt I did last year at the finish line. Usain Bolt looks awesome. I, on the other hand, looked like a really nerdy cheerleader. 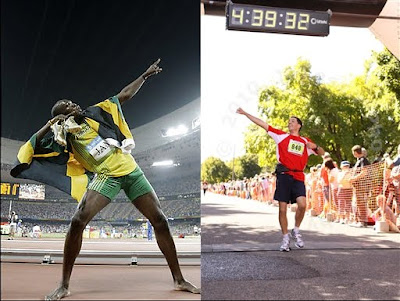 I looked down at my watch and saw that I had achieved a PR by a comfortable (loaded with sarcasm) 1 minute and 4 seconds! To be honest, I felt well-trained and thought I'd be a little faster, but with leg cramps (or anything else that could come up), you just roll with the punches and do the best you can. I felt good knowing that I had 1) earned a PR, and 2) pushed my body to give everything it had. 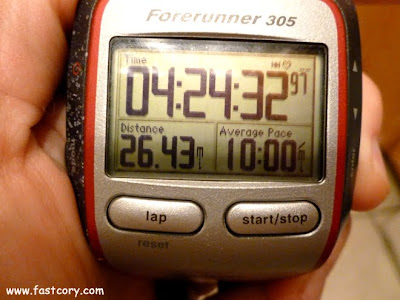 After I crossed the finish line I saw fellow bloggers Erin & Betsy who were volunteering at the race. I told them two things: 1) Thanks for helping at the finish line! and 2) Okay, I'm going to go die now. My stomach was not at all interested in eating anything. I barely managed to eat a small ice cream sandwich without throwing up. Then I saw John again who did awesome finishing his first marathon! 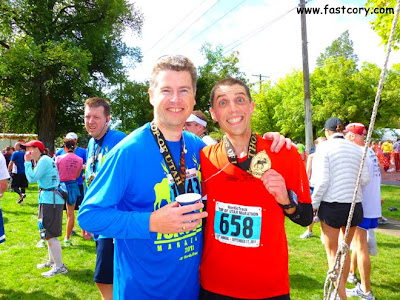 I took off my shoes to see what damage had been done from running 26.4 miles in soaking wet socks. My skin looked like elephants but I amazingly avoided any blisters. My little girls begged to paint my toenails a few days ago and I realized this was probably good so I wouldn't see if any toenails had turned black. 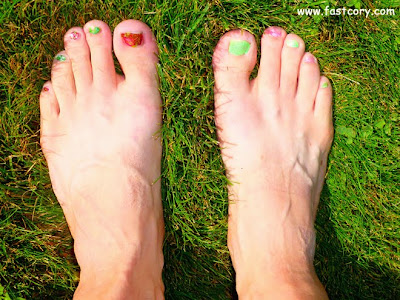 My ailments were nothing compared to one guy I saw at the finish line who had the worst bloody nipples I have ever seen. I wanted to hug him and tell him I was sorry. A marathon in a soaking shirt could certainly cause problems. I was thankful I remembered Band-Aids. 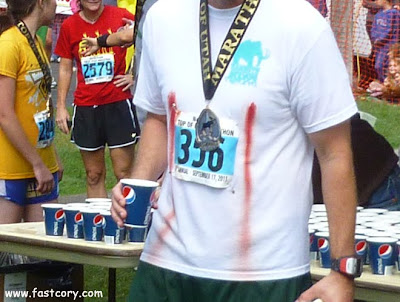 I felt really happy at the finish line knowing that I had given 100%. It hurt really bad and it was really hard, yet this was the fastest that my legs have ever run 26.2 miles. I was happy. Us runners realize something that non-runners don't: our bodies are capable of so, so much more than most people know. 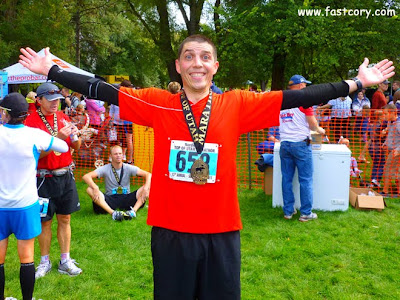 The Top Of Utah Marathon put on a fantastic race again, as usual. Aid stations were excellent, volunteers were incredible, and the finishers area was perfect. Plus - I love this shirt! The moose wearing running shoes = awesome! 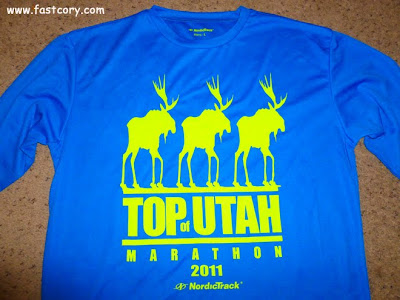 And the medal?!?! This puppy is huge. It's the biggest medal in my collection. This thing is big enough to need a birth certificate. Thank you Top Of Utah for another excellent marathon! 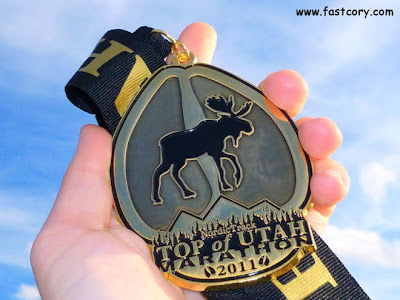 "Some think guts is sprinting at the end of a race. But guts is what got you there to begin with. Guts start back in the hills with 6 miles to go and you're thinking of how you can get out of this race without anyone noticing. Guts begin when you still have forty minutes of torture left and you're already hurting more than you ever remember." ~ George Sheehan
Posted by Cory Reese at 6:31 AM