The Good: At three photo points photographers told me they got some awesome jumping pictures. One even called me back to show me a few of my jumping pics.
The Bad: The hottest temperature at the starting line in race history. No bueno.
The Ugly: My fluorescent orange thrift store trucker hat with a pom pom on top.

At the expo the night before the race I was able to see this year's poster given to all 7,000+ runners. I was thrilled when I learned that they were using one of my pictures for the poster! 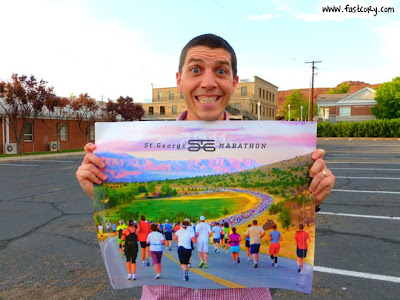 On race morning we boarded our bus for the starting line. We had no idea that our driver was about to give us a taste of the Matterhorn ride at Disneyland. Whoa mama. It was fun to meet up with our whole gaggle of friends. Obviously this is before the race started because we're all still smiling: 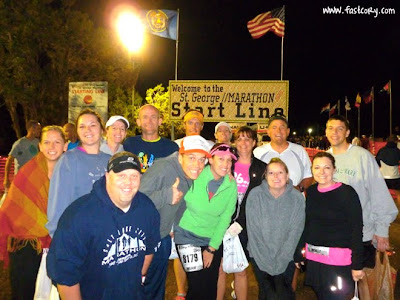 I found this awesome fluorescent orange hat years ago and I break it out on rare occasions. The finishing touch is a bright orange pom pom on top. When was the last time you saw a hat with a pom pom on top of a hat? Ultra-classy. 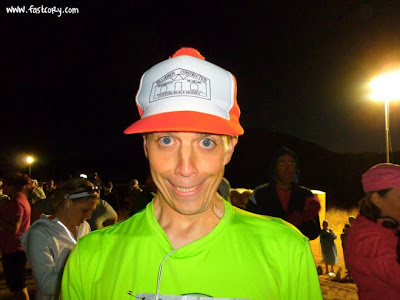 I was looking forward to running the marathon with my wife Mel again. She has been training well and thought she may be ready to break her PR of 5:26. Whenever possible during the race, I ran on a dirt shoulder instead of the road which makes my knees happier. 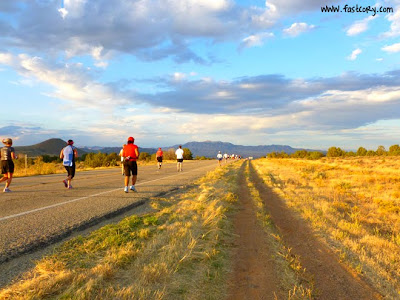 We reached the town of Veyo at mile 7 which is arguably the hardest part of the course. Not because of the dreaded Veyo hill. But because you pass a restaurant where you can smell the sweet breeze of bacon and eggs. It tempts you to quit the race and walk into the cafe. Instead we decided to just have some oranges and Gatorade at the aid station. Bleh. 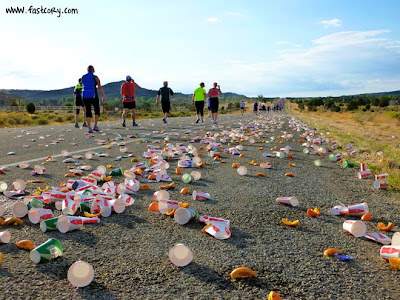 We were still feeling good when we arrived at the Veyo Hill. It is steep and long, and you can walk up it almost as fast as you can run up it. Here is Mel running a little stretch of the hill. 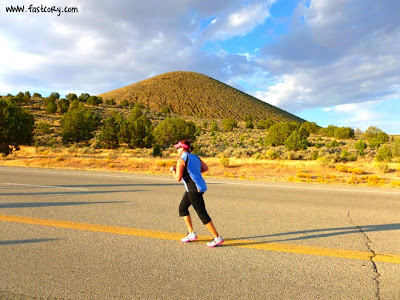 Still feeling good after Veyo, we thought we were pacing well and were right where we needed to be with time. There is nothing like being part of an enormous group with a collective purpose: keep putting one foot in front of the other until you reach the finish line 26.2 miles later. 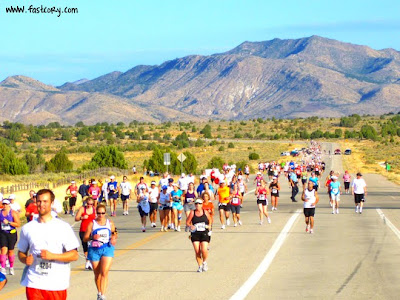 You know who was great? All the volunteers were great! No, they were even greater than great. They were the greaterest. I am always amazed at how kind, helpful, and happy each of the hundreds of volunteers are. I tried to thank every single volunteer I saw. You know who else is awesome? Our neighbor Mel who hung up lots of signs along the way: 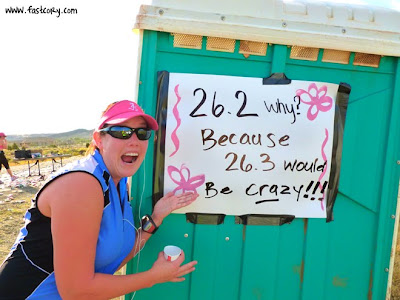 We listened to the same radio station as we were running. I felt a little sheepish as we were singing "Another One Bites the Dust" on the radio at the same moment we happened to be passing a guy. He probably thought we were ultra-jerks. 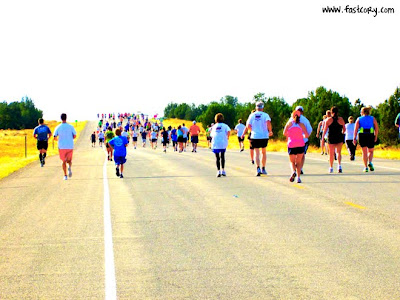 I would now like to introduce to you the most beautiful section of scenery there ever was in a marathon - Snow Canyon: 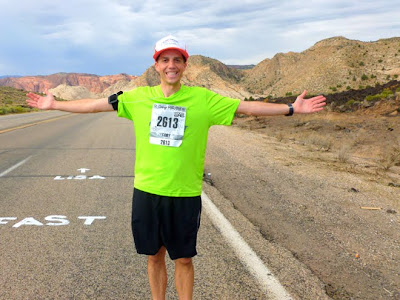 We had some good, some bad, and some ugly when we got to Snow Canyon. The Good: Clouds had rolled in creating absolutely perfect lighting to take pictures of the scenery. I was in heaven. 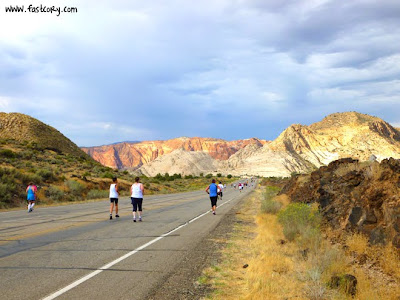 The Bad: Despite getting in plenty of training, Mel had IT band and knee problems slap her across the face hardcore starting at mile 12. Mile 12. This is so not good to be unable to run when you still have another gut-wrenching 14 miles to go. 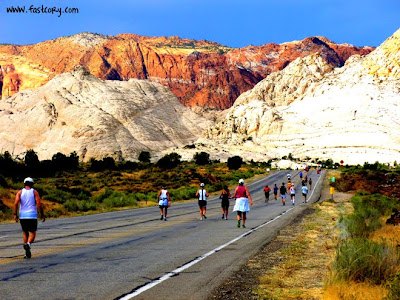 The Ugly: The nail in the coffin was when she had to start an antibiotic yesterday that made her very sick to the stomach. She started dry heaving around the same time her knees acted up. I was pretty sure it was only a matter of time before she was wearing bananas and Gatorade. (Sorry. Was that a tad too descriptive?) 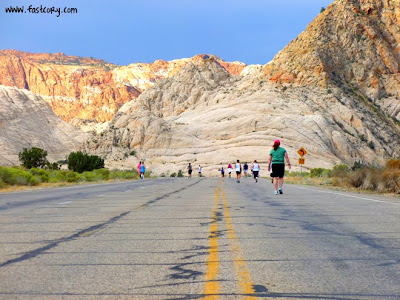 Mel kept saying over and over "Just go. You can leave me. I'll be okay." And I kept saying "No. I'm not leaving. We're doing this together." Still, she told me to go ahead. Eventually I got right to the heart of the matter and said "Listen. This is going to be hard. But you can do it. I'm not leaving you so you don't even need to say it anymore." 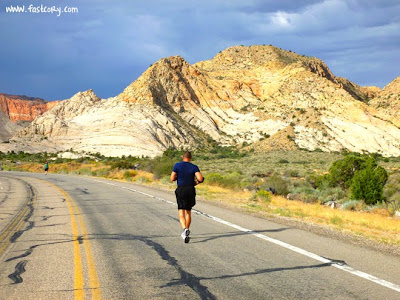 By this point Mel was discouraged, frustrated, distraught, and hurting. I knew exactly how she felt. At the Ogden Marathon in May, I beat the race cutoff by a comfortable (cough, cough) 18 minutes. I have done the marathon death shuffle for 10+ miles worrying if I would make the finish line before the cutoff. I felt her pain. But we remembered our friend Carol who we had seen a few hours earlier at the starting line. She is starting chemotherapy AGAIN on Monday and doing this marathon was her way of saying "Screw you cancer!" That makes it hard to feel sorry for yourself. 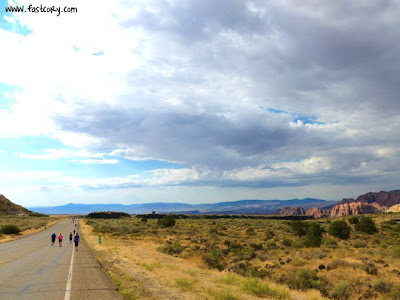 I was so impressed and inspired by everyone I saw around me in those last 8 miles. I am inspired by all you fast runners, but have you ever had the experience of being surrounded by all those back-of-the-packers who have been out on the course for six hours and every step is pure agony? Incredible. I was amazed by all these people slowly shuffling to the finish. 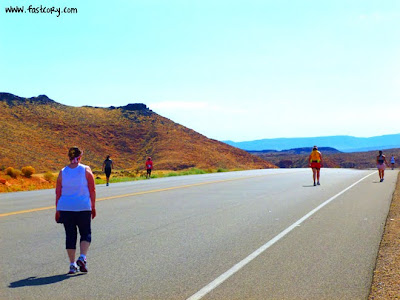 The community support for the St. George Marathon is unequaled. One person had a table in their front yard full of different kinds of food with a large poster that said "Free Food, Take What You Want". People bought packs of bottled water and stood on the sidewalk giving them away. A mile later, people had filled baggies with ice, then stood on the sidewalk with their cooler giving ice to runners. I thought Mel may start crying tears of joy. These people weren't at aid stations. They were just there being nice. It. Was. Awesome. 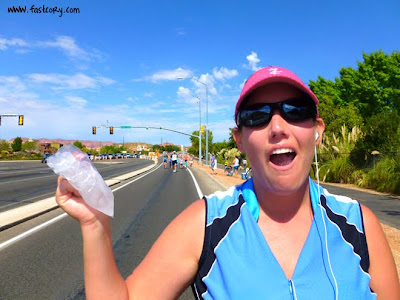 I held Mel's hand the last 4 miles to keep her moving. She said if I hadn't been with her she would have quit at Snow Canyon. She said the pain she was feeling may have been worse than childbirth. She said it felt like her whole body had a migraine. But she kept walking. I was so proud of her.

And then 6 hours and 35 minutes after starting the race, we crossed the finish line together. (Yes, I jumped across.) It was 88 degrees when we finished, and we earned some hefty sunburns along with our medals.

During the race I told Mel approximately 382 times how excited I was to get to the finish line so that I could eat obscene amounts of ice cream. I managed to get down 2 king-size ice cream sandwiches. I think I could have done one more but might have ended up wearing it later. 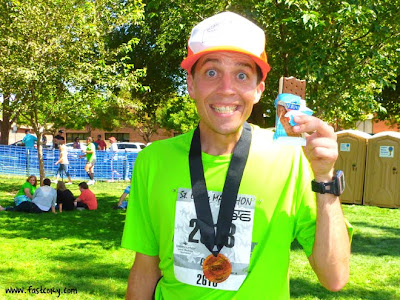 I was happy to cross the finish line with my wife (and my pom pom hat). She endured hard things and didn't give up and definitely had something to be proud of. In finishing the St. George Marathon, I also finished the Utah Grand Slam - completing at least 4 Utah marathons over the summer months. Finishing the Grand Slam was my main goal for the year so I got an awesome Slam medal to join my awesome St. George Marathon Medal. 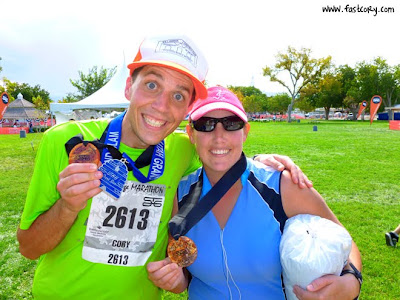 Now it's time to get down to business and put the finishing touches on training for my first 100 Miler coming up in a month and a half. But I think we'll always remember the amazing journey we had together at the 2011 St. George Marathon. 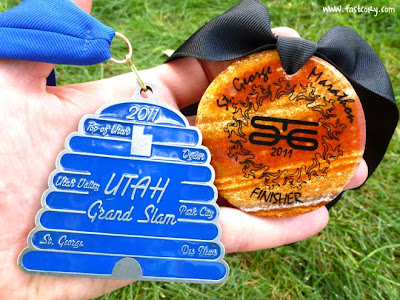 "The body does not want you to do this. As you run, it tells you to stop but the mind must be strong. You always go too far for your body. You must handle the pain with strategy...It is not age; it is not diet. It is the will to succeed."
~ Jacqueline Gareau, 1980 Boston Marathon champ
Posted by Cory Reese at 7:22 AM