I Didn't Rob A Bank

Monday, February 20th 2012: 30 miles @ 11:57 minutes per mile. This was my longest run since the Javelina Jundred. I started running a little before 6am and it was bitter cold outside. How cold? So cold that I wore this: 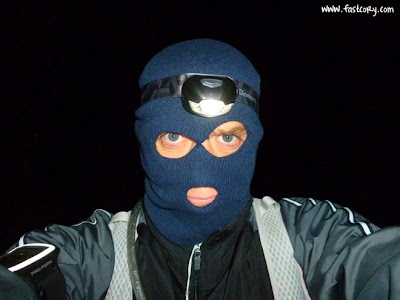 Don't worry. I only felt half tempted to rob a bank. I wouldn't have dared to wear this if I ran in the neighborhood. I think that could be asking for trouble. My brother-in-law said I looked like a spelunking burglar.

My biggest problem for the first 7-8 miles was that the water tube on my hydration pack kept freezing. For a while it was completely frozen. The good thing is that the ground was frozen also. Once the sun came up, certain sections were pretty muddy and slippery. 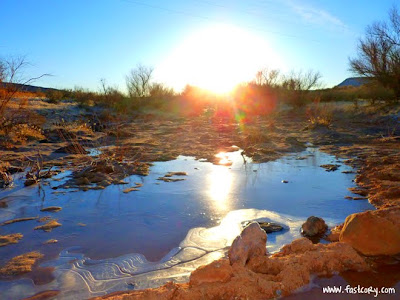 Although it was really pretty watching the sun come up and start to light up the red mountains. (And did I mention that it was freezing cold?) 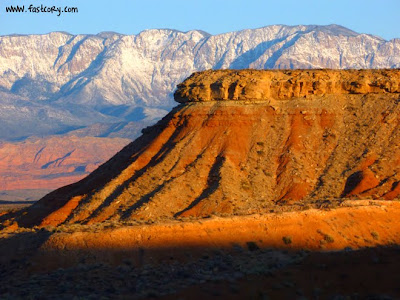 I'll be honest, this was a tough run for me. I didn't feel awesome for the last 8ish miles. 30 miles on trails is hard. A few times I thought to myself "Wow, what have I done? How in the world am I going to run 100 miles here? Maybe you should go back to 5k races instead." My right knee started to get tight and sore so I was definitely glad to be done. 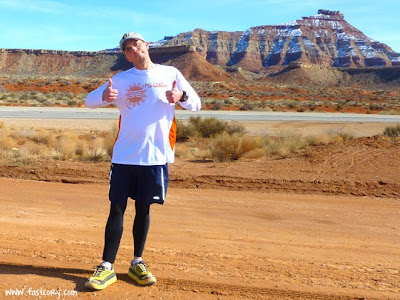 Wednesday, February 22nd 2012: Rest. I must be inviting bad karma somewhere in my life because I walked into a gas station and the speaker was playing a Michael Bolton song. I am being honest. After my anti-Bolton comments last week I was shocked to hear one of his songs. This is 2012 for crying out loud! Who in their right mind thinks to them self "Yea, I think this Michael Bolton song would be good to put on the rotation for the gas station music." Ahhhh, the humanity.

Thursday, February 23rd 2012: 7 miles @ 12:47 minutes per mile. Those couple rest days made a huge difference and I was surprised how much better my knee felt. I am so thankful. I ran on the Prospector Trail and the scenery is just incredible.

I know the upcoming picture looks like I'm jumping off this rock. But that's not what happened. It was so insanely windy that I just lifted my arms and went flying into the air. The city I live in is named Hurricane. This day was yet another reminder of how the city got it's name. (Actually, almost everyday gives another reminder.) 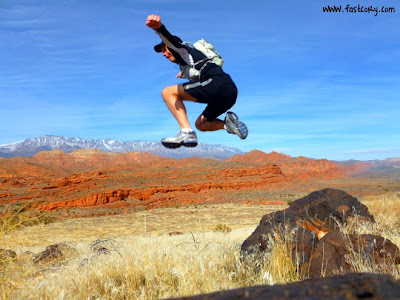 I saw this on the way home just to show you how hard the wind was blowing. Just out of screen shot is a semi truck flying overhead. And I heard little people singing "We'd like to welcome you to Munchkin Land!" Creepy. 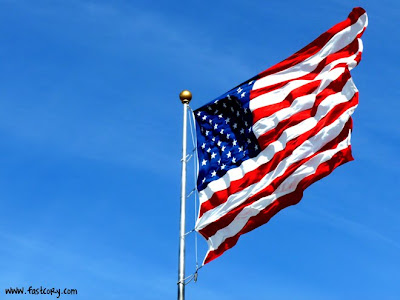 Saturday, February 25th 2012: I went on a bike ride with the wife. Great times were had by all. 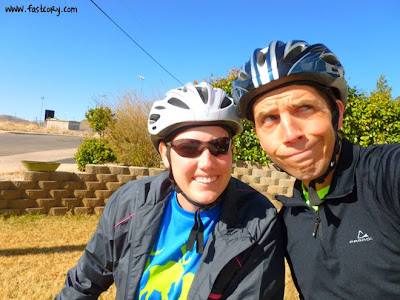 We happened to cruise past an aid station for a century ride going on in the city. I joked with Mel that we should have stopped for breakfast. Nobody would have ever known that we weren't part of the organized ride.

I think the weather will be warming up so no more wearing the burglar mask. And if someone robs a Hostess store wearing something similar, I promise....it wasn't me.
Posted by Cory Reese at 7:23 AM