I ran the Antelope Island Buffalo Run 50 miler on Saturday and had an awesome experience. I felt a little under-trained but figured since I had done the 100 miler in November, surely 50 miles wouldn’t be too bad. (Possibly dumbest thought ever.)

The race starts with a miles-long steep climb. Imagine this: pitch black outside. All you see is the few feet ahead of you from the beam of your headlamp. You see little beams of light like a line of ants going up the mountain. I didn’t see anybody running. We were all power hiking. I didn’t hear anybody talking. Everyone was intently focused on the hill and conserving energy for the coming 48 miles. And finally the sun started to rise over the Great Salt Lake. 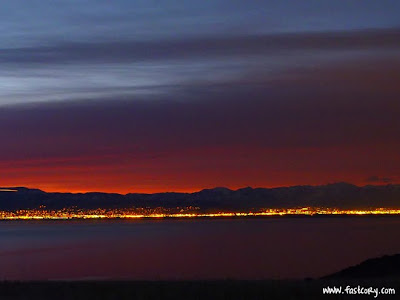 Antelope Island sits in the Great Salt Lake and I had never been on any of it’s trails. As the sun started to rise I was amazed by the incredible scenery. (Which helps explain why I took 218 pictures during the race.) 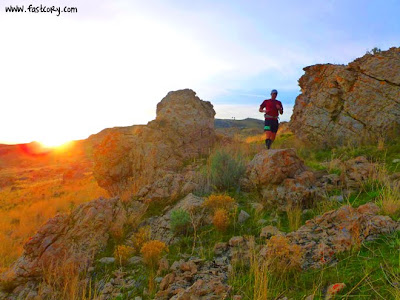 I tucked in with a group of wiley old veteran runners. They had a steady, conservative pace that seemed sustainable for the race. Older ultrarunners are really a gem. They have perfected the art of tortoise-and-the-hare. They hang back early while the youngsters speed by, then pass everyone at mile 40 when the youngster’s legs have blown up. I was happy with this little pack of guys. 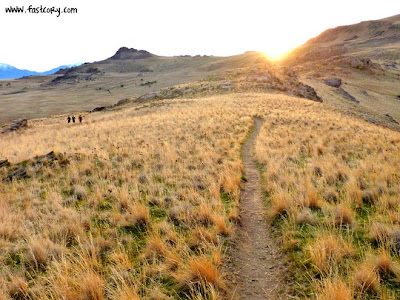 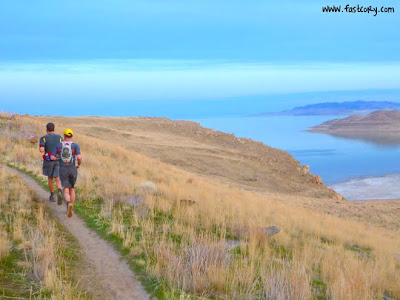 The first 20 miles of the race were particularly challenging. There was some rocky terrain and long hills where you thought you’d never reach the top 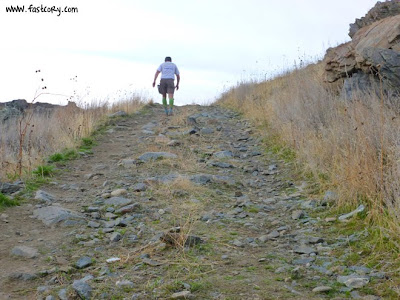 I decided the 50 miler would be an appropriate setting to break out the Don’t Worry, Be Happy hat that Mel got me in Virgin Islands. Although this did have the unfortunate side effect of getting the song stuck in my brain more times than I cared for. 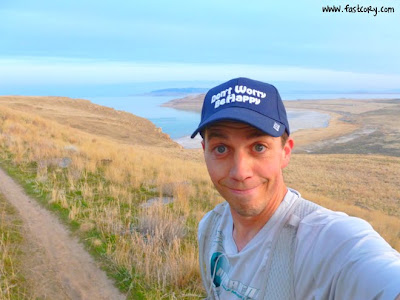 I experimented with a heart rate monitor for the first time ever. My watch beeped whenever I went above 148 beats per minute. I listened to an Ultra Runner Podcast which talked about the importance of using a monitor for the first 30 miles so that you don’t start out too fast and you don’t fill your body with lactic acid early in the race. I hoped that if I was conservative for the first half, I wouldn’t feel like a dead weed for the second half. 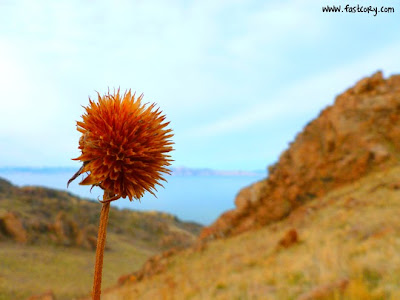 There was a 50k race that started a few hours later which made the trails a little more congested at times, but I didn’t mind having some more company. Around mile 20 I saw a race photographer and said “Hey, I’ll do a jumping picture for you.” After I jumped he got a grin and said “I remember, you jump at all your races don’t you.” I told him that I try my best. 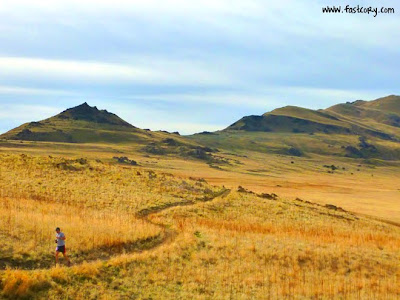 I expected to see more buffalo than I did. I wasn’t even close enough to smell them. Or vice versa. 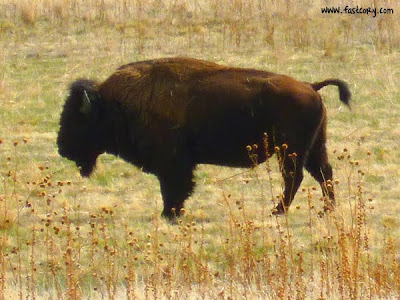 I was feeling pretty tired by mile 30. Even though the news said temps only got into the 70’s, I swear it was 120 degrees out there. I seriously felt like I was melting! I carried an extra water bottle just to keep dumping water on me, and still I could not cool off. Much to the dismay of Bobby McFerrin’s song, I wasn’t feeling so Happy. 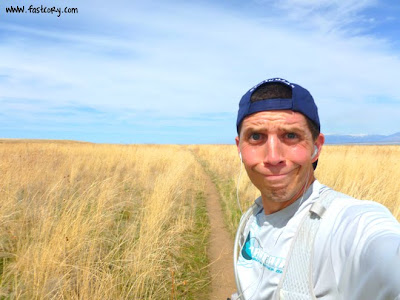 Around mile 35 I started to feel some discouragement and despair. I felt like I was on fire, my quads were sore, and I felt like I was completely out of juice. I didn't know how I could keep going. I would have sold my firstborn child for a cold Red Bull. Then the song “All This Time” by Britt Nicole came on the radio and gave me the boost I needed. (Check out a video of the song here, I think you’ll like it.) The scenery almost took my mind off the fact that my skin had ignited in flames. 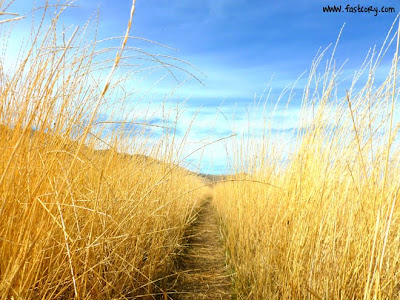 I met some awesome blogger friends during the race. I saw Janice from Run Far Strong a few times. It's good to get a few high fives from a friend along the way. And Chris Boyack from The Scene Begins who ate a positively nauseating 47 Gu’s (!!!!!!) during the 100 mile race. Chris was so nice – after he got cleaned up he came back to mile 44 and cheered on the runners.

One of my favorite things was seeing Jay Aldous at an aid station. I ran the Javelina Jundred with Jay who happens to be the WORLD (yes, world) record holder for fastest 100 miler for someone age 50-54. So I see Jay at an aid station and he is so happy and encouraging. I drank a cup of Coke and he made sure I had everything I needed. Then he said "Do you want one more cup of Coke just in case? You can always throw it up later." That kind of reasoning is hard to argue with. So I had another cup. Thanks Jay!

The area I struggled with the most was my stomach. It never felt very good. It was a little tense the day before the race too, so maybe it wasn’t because of the running. It just felt tight – like there was a buffalo standing on my stomach. The sure sign that my stomach is off is when I can’t eat candy. It wasn’t until mile 46 when I was able to eat some of these. 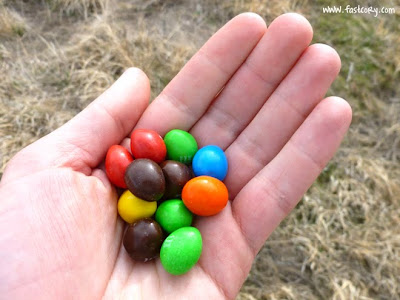 The last 10 miles were challenging because I was tired. But a very strange thing was happening..... I could still run. Even though my quads were sore and my rump felt like I'd been kicked by a buffalo......I could still run. And the knees? Golden! Knee issues were my biggest fear and they didn't bother me once! I can't tell you how happy I was (and am) about this! I knew my day would have a happy ending. 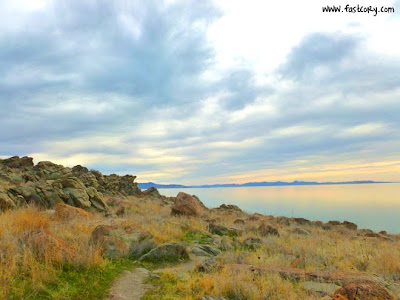 In the last few miles I could feel the finish line pulling me in. I was so happy that I wasn't doing the death shuffle, but I did feel worn out and exhausted. I had my fun for the day and I was ready to be done. I saw this sign and got even more excited to finish the race and stop running. 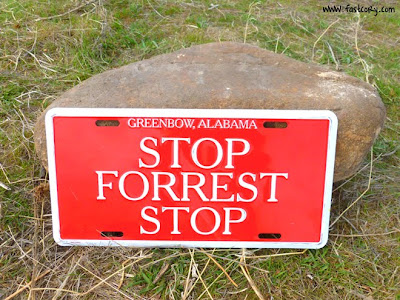 And then I saw the finish line. Relief. I made a big jump across the line and was done. Five hours earlier I wasn't sure how I was going to make it to the finish line. I was wasted and exhausted and I didn't think it was physically possible to keep going in the heat for five more hours.

I re-learned a few valuable lessons when I crossed that finish line: Our bodies are pretty remarkable. We can always go one more step. We can't know our limits unless we push them. And then push them a little more. We can do hard things. We are capable of more than we know. 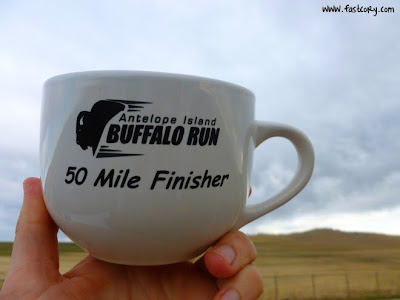 And how is this for a post-race meal.....BUFFALO STEW! I had never eaten buffalo before, and it wasn't too bad. Unfortunately my stomach still didn't feel very good so I didn't eat much. Heck, if I can't eat Oreos at the aid station, I surely can't eat buffalo stew. 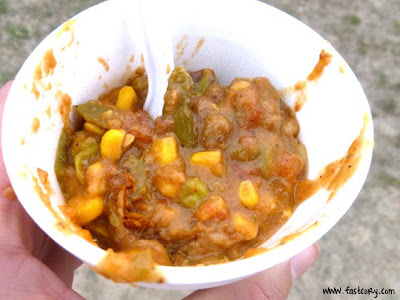 My feet were pretty sore and tender afterward, but I didn't have any blisters and I'm pretty sure I'll be able to keep all my toe nails. You can see how much dirt piled up on my legs. 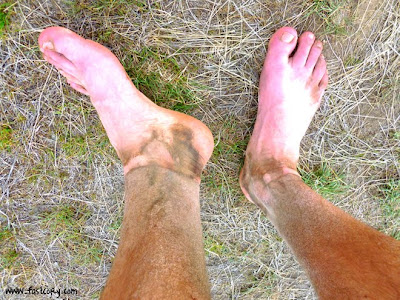 I would call the Buffalo Run a success. I was able to run WAY more toward the end than I have in any other ultra, my knees had no problems, I didn't throw up (despite coming close a few times), and I didn't get chased by a buffalo. My Don't Worry, Be Happy hat ended up being a perfect summary of the race. 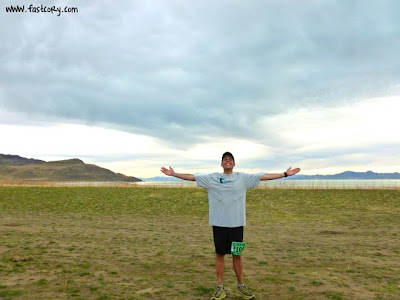