Today's guest post is by Tom Dansie, a person who can run 26.2 miles at a pace faster than I can run 1 mile. 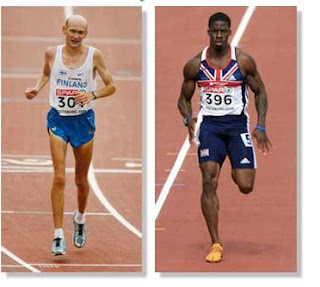 There is a side by side comparison image of a skinny, balding, goofy looking white Finnish distance runner next to a young, muscular, attractive, black British sprinter currently going viral on Facebook, the ultimate source for information on everything from tea party politics to the best kind of exercise regimen. Usually the image is posted by advocates of high intensity exercise programs and has a caption like, "Which is healthier?"

The obvious intent of the comparison is to extol the virtues of short duration, high intensity exercise (P90X / Crossfit / weight lifting - represented by the sprinter image) over longer duration and lower intensity exercise (cardio training - represented by the distance runner image), with the sprinter clearly being the obvious preferred choice. Who can argue that Crossfit (or P90X, etc.) is not the greatest way to exercise when you get results looking like the ripped sprinter?

Well, I am here to speak up for the goofy Finn. Let me be the first to say, "I want to be him!" Let me explain why.

First of all, I can't be certain but it looks like the sprinter in the image is British sprinting sensation Dwain Chambers. The same Dwain Chambers who tested positive for steroid use in 2003, resulting in a lifetime ban from Olympic competition, erasure of his 2002 Olympic gold medal, and forfeiture of all his earnings from his athletics career. If it takes steroids to look like him I think I will pass.

I know what you are going to say next, "Well, you can't judge all sprinters based on one isolated instance of drug use." To which I say, "Exactly. Just like you can't compare the relative health benefits of high intensity versus low intensity exercise by looking at two isolated photographs." 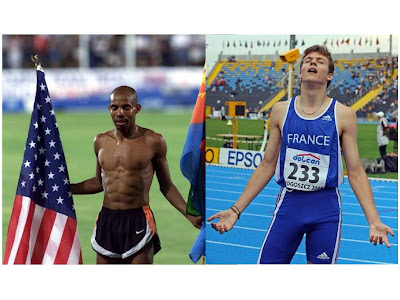 These are both world class athletes: one a sprinter, the other a marathoner. Which would you want to be? A little harder choice, isn't it? I would suspect most people would choose the image on the left, I know I would.

The image on the left is of Meb Keflezighi, one of America's top marathoners, silver medalist at the 2004 Olympic marathon and winner of the 2009 New York City Marathon. The image on the right is of Christophe Lemaitre, a rising French sprinting star who won the 100m, 200m, and 4x100m relay at the 2010 European Championships.

What can we learn from these two photo comparison exercises? Answer: If you want to look like a serious athlete and not a dork, you had better be black.

Because we don’t get to choose our skin color, what else can we learn from these two photo comparison exercises? Answer: Two cherry picked images can never completely illustrate the benefits of one exercise regimen over another.

Further, some body types respond better to one type of exercise program than do others. Just because you adopt a Crossfit / P90X / sprinter's workout you will not automatically end up looking like Dwain Chambers. And (sadly for me) if you adopt a marathoner’s training program you are not guaranteed to look like Meb Keflezighi. Some of us (again, sadly for me) are always destined to look like the goofy Finn. 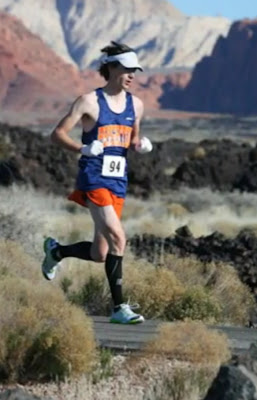 But here’s the good part. I am happy being a goofy distance runner. I like the health benefits of low intensity, long duration exercise. I know I will never have bulging biceps by following the exercise program I have chosen, but I don’t care. If concentrating on cardiovascular exercise means I am destined to be skinny and goofy looking I am content with that. At least I don’t have a receding hairline (as far as you know).

Of course, some people are different. They are more suited to high intensity exercise. They like throwing old tires around and doing wall push-ups. And they put a higher priority on muscle tone and strength. I think that is great for them. I am not suggesting that Crossfit / P90X / etc. are not great exercise programs. I believe they are.

What I am suggesting is everybody gets to choose which type of exercise suits them best. The most important thing is to stay active and try to improve your overall health through some type of exercise program, and to be consistent in whatever program you choose.

I just have three words of caution for those who choose a Crossfit / P90X / sprinter’s workout:

1) Don’t try to convince me that your workout program is better than mine with pictures of dorky looking distances runners (we already know we are dorks).
2) Don’t think you are going to look like Dwain Chambers without doping.
3) It’s just not worth it to dope (unless you are a national sports icon, prominent Nike sponsored athlete, and founder of a high profile cancer advocacy group – in which case I guess it is worth it).
Posted by Cory Reese at 7:08 AM