Today's guest post is by Parker Haslam. Don't get too offended by his Colbert Report-ish humor:

If you’re pretentious, don’t over-think or confuse yourself. I am completely aware that there are far more noteworthy topics of controversy than the above mentioned forms of fitness and hobby.

Cranky! That’s the word I would use to describe most of us motorists when confronted with the problem of navigating the roads of Southern Utah when they’re plagued with cyclists. I recognize that people who peddle are using a crank to propel themselves and that the adjective “cranky” more applies to their passion than to humans in cars that vehemently express their disdain for “that guy” hogging half of the highway shoulder in his shirt that looks like a NASCAR auto hood.

I respect what your over all objective is Mr. Wheel. I get it! You want to enjoy the scenery in an open cockpit at a slower pace than motorcycles typically travel. All while getting a workout and showing your sculpted calves and beautiful varicose veins to the 60 cars behind you that are too timid to clip your shoulder as you make it up the last quarter mile of hill left to go.

Other than awkwardly running in place at cross walks, Mr. Jogger doesn’t annoy much. Sure, he is nauseating the local church members about his triumphs over the physical and mental adversities of the latest fund raising 5 or 10k. But can you blame someone for talking about something for which they are passionate.

Before I caught the “run bug”, I despised these people out of envy however; I have never been tempted to throw a water bottle at the side of their head while they share their stories of mind and body pain. Mr. Wheels doesn’t have to share. In fact, he’s often the selfish one. Halfway in the road, not committing to anything other than his efforts to prove that he’s got road rights too. Why he doesn’t travel in the three feet of free space a little further to the right? I will never know. Why he believes he can shoot through an intersection when the lights defer the right-of-way to opposing traffic? Your guess is as good as mine. But one thing is for sure, he needs to travel the friggin’ speed limit if he’s on my side of that white line or else Toyota will be a new sponsor imprinted on his tail gate. 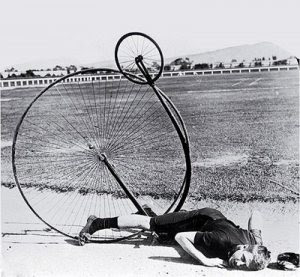 I see Mr. Wheels asserting himself everywhere. Even when he has joined us motorists, he’s still announcing that we all need to “share the road” with the bumper stickers that I am convinced are part of an underground cult that meets to correlate which stickers to use and when to use them. Am I missing something? Does Mr. Wheels pay an extra “Bicycle Tax” that is used to fund the development of our city’s road system? Go ahead and Google it. The answer is “no”. The day Mr. Wheels is fronting cash to fix potholes and widen the roads is the day I respectfully wait behind the channel of cheek sweat that bobs up and down as he pumps up the road in his ignorance to the fact that we are late for work while he watches the sunrise in gear two. Until then, expect me to buzz the tower and laugh at you in my rear view mirror while you wrestle the handgrips for control. Ritzy little clown!

Mr. Run, thank you so much for never interfering with the roads. I know that the occasional “J-Walker” misrepresents you but most of the population can distinguish between the guy carrying a Pizza box across State Street and a tightly clothed, sweat drenched fitness buff who shuffles his iPod while he waits for the “please cross” sign to light up. We all know that cyclists are just lazy joggers that take breaks by coasting instead of stopping anyway. Mr. Jogger, have a nice day.

Oh and by the way Mr. Wheels, I love it when your bike is upside down and you are changing your flat on the side of the road. Nothing makes me happier. Well……almost nothing.
Posted by Cory Reese at 7:53 AM