Zion 100 Review From My Pacer

Editor's Note: My friend Jess Jensen joined me for miles 70-90 of the recent 100 miler. Jess is incredible. I can't thank her enough for her help. You can check out her blog at: www.journeytothelandofskinny.com. Here is her experience of those 20 miles:

There I was waiting at the finish line, showered, with a 45 min nap under my belt, waiting for Mel and Cory to come across the finish line and looking around at all the other ultra finishers with new found respect. If it was getting increasingly harder for me to bend my knees and walk normal, I can only imagine how sore and tired the finishers felt.

Now let's rewind three months ago when Cory asked me if I would be able to pace him in the Zion 100. I didn't even hesitate and said "heck yes. How far?" I thought he would say 10 maybe 15 miles at the most but when he said 20, I tried not to let my jaw drop and confidently said "No problem". I mean I had three months to train right?

Now lets fastword to 11:30pm on Friday May 11th. I had ran a total of 2 trail runs with the longest being 7 miles before this race. I have been doing CrossFit pretty faithfully these last 3 months so I was hoping that training would help me on the trail. Now I was pretty nervous because I didn't want to be late meeting Cory at the 70 mile aid station, I didn't want to hold him back in any way, I felt like this was my first long run ever (I have ran 3 marathons) , I hadn't ever ran on the trail in the dark, what if I annoyed Cory and he wanted to leave me at one of the aid stations along the way.......lots of random things were running through my head. I felt better because I had read an article on what it took to be a good pacer. I had pretty much none of the qualities it stated but one. Be there for the runner. I knew I could do that.

Cory gave us the time frame of 11:30pm to 3am of when he thought he would be at the aid station. Mel and I watched the online tracker and by that figured he would be coming in around 1am. We got up to the aid station at 12:30am. It was freezing! I was so thankful that I grabbed my jacket at the last minute. When we got to the aid station there were a few runners that were dropping out and were not to happy about it. There was lots of food for the runners to fuel up on and a fire to get warm by. Mel and I decided to hang out in the car and wait for Cory to come. I spent the next 2hrs drifting in and out of sleep until we saw three headlights in the distance come towards us and one of them stop at the car. The first thing I said when I saw Cory "You look way better then I thought you would." I really like to be encouraging.

After spending about 20 minutes getting Cory ready to start the next leg of the journey we headed out. It was 3:30AM! I wasn't sure how much running Cory would want to do at this point so I was prepared to walk and talk the whole way. And I did. I told him to treat me like a TV.....if he wanted comedy, sports, drama, politics or reality I could give him that. I also told him to feel free to hit the mute button! The first couple miles were pretty flat but then we started to head up the mountain road and his poor legs and feet were feeling it. I think a direct quote was "It's like hot pins and needles are stabbing my feet." At that point I knew that there was not going to be any running and I mentally settled in for a good long walk. We both got quite a surprise when my phone rang at 4:10am and it was one of our friends asking where we were. She was trying to find her runner that she was pacing. I was surprised to have service out there but I actually had it the whole way and it was great because I was able to give Mel updates along the way.

At the next aid station at Little Creek Mesa Cory was able to change his shoes into those super big sole ones. Sorry I don't know the name...something Huka or Hooka or Hooker? I have no problem with touching feet and I told Cory to let me rub his feet for him but he wouldn't let me until I made him let me rub one foot for him. I tried to tell him as his pacer it was my job and I didn't have these man hands for nothing but he put me on mute then. There were runners at that aid station that had just woken up from a 2hr nap! I don't think I would be able to keep moving if I slept on the trail. 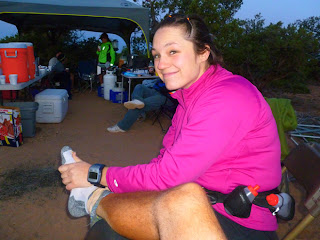 The next couple miles were pretty steep downhill but so pretty with the golf course in the distance and all the green fields. We also met one of the oldest runners going down the hill. He was 69 and this was like his 30th or something ultra. We called him Father Time and it was fun to talk to him for a bit and then he scurried off and we only ever saw him in the distance after that. 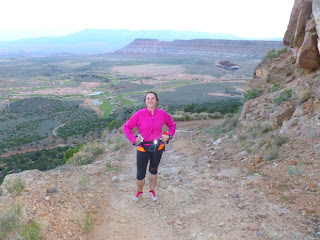 Lots of miles were covered and not much to distinguish them from each other. At one point I asked Cory if he wanted to try running for a minute and walking for a few. I am one of those awkward people that laugh at people's pain at the wrong moments and when Cory started to run and the expression on his face and the words coming out of his mouth...I won't lie, I giggled. I am smiling right now as I type this. We only attempted running for one more minute after that and we were good with walking after that. 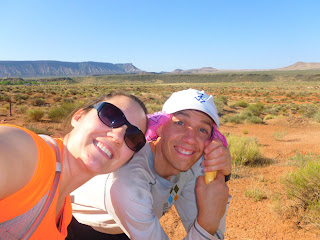 I didn't start to feel tired till mile 13. There was no way I was going to complain about tired legs or feet or mind. I don't even remember what we talked about or all the songs I sang along to on the Ipod. I tried not to sing any Heart or Celine Dion because I didn't want to drive Cory over one of the cliffs we walked along. I did break out in a few dance moves after taking a 5 hour energy though. I think Cory wanted to push me over one of the cliffs!

We did meet a super unhelpful mtn. biker who told us the aid station was just around the next corner. LIAR! Cory knew this part of the trail really well and knew that we had a good 3 miles to go. I know I hate hearing "you're almost there" when running the last few miles of a marathon but when you are at mile 87 of an Ultra and to here those words it makes you want to pull your hair out.

I had mixed feelings hitting the aid station at mile 90. We rolled in at 12:20pm. I was super happy to be done but I also felt guilty leaving Cory knowing he still had 10 miles left to go. Good thing Mel was there to help give him the extra pep in his step he needed to finish.

I am so grateful to Cory for letting me be apart of his Ultra experience and I would do it again in a heartbeat. I told Cory I felt like I had been on a deer death march that my dad used to send us on during hunting season, only much longer. I loved it out there and would love to take up trail running.

The race was awesome and the volunteers at the aid stations were great. I am very tempted to sign up for a trail run of my own or maybe I should just become a professional pacer?
Posted by Cory Reese at 7:38 AM